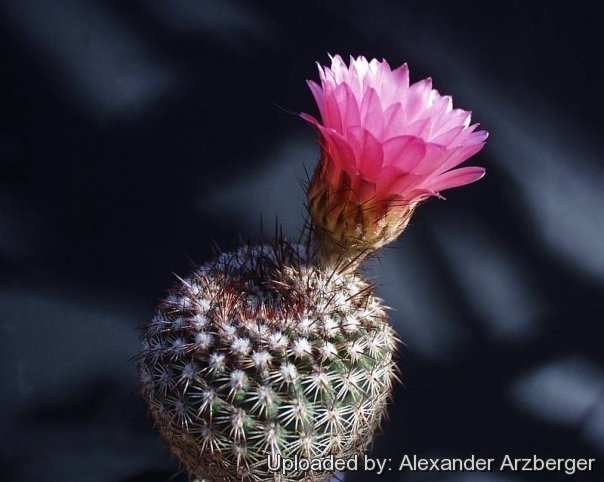 Origin and Habitat: Parodia rutilans occurs in the Sierra Largo, from near the Brazilian border of Uruguay.

Description: Parodia rutilans, best known as Notocactus rutilans, is a small-growing, usually solitary, cactus species. The numerous stiff, sharp spines are varicoloured and the centrals are reddish-brown. The flowers are very showy, 5 cm long, with much white wool along the tubes, and translucent petals, salmon to carmine-red shading to egg-yolk yellow in the centre. The plants are very free-flowering and self- fertile; producing many seeds. When in flower the whole plant shimmers with color and it flowers when quite young. Two subspecies of Parodia rutilans are sometime recognized the nominate form (dull green with 2 central spines) and Subspecies veeniana (bright green with 1 central spine).
Derivation of specific name: The Latin epithet 'rutilans', 'reddish-orange', presumably refers to the the colour of the spination.
Stems: Globose, to slightly elongate or shortly cylindrical in age, dull bluish green to bright green, to 5 cm high.
Ribs: 18-24, running spirally and divided by deep furrows, with small chinlike humps.
Areoles: Densely white woolly, later less so.
Central spines: 1 or 2, light reddish brown, straight or pointing slightly downward, lower one stoutest, to 7 mm long.
Radial spines: 14-16, diverging, white to yellowish or gray, with darker tips, to 5 mm long.
Flowers: Salmon, rose or carmine red, with dark tips, buttercup yellow inside, throat paler, 3-4 cm long, to 6 cm in diameter. Pericarpels and floral tubes with white wool and reddish brown bristles.
Fruits: Up to 1.5 cm long.

Subspecies, varieties, forms and cultivars of plants belonging to the Parodia mueller-melchersii group 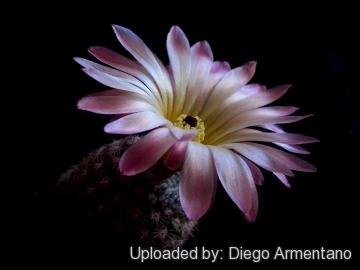 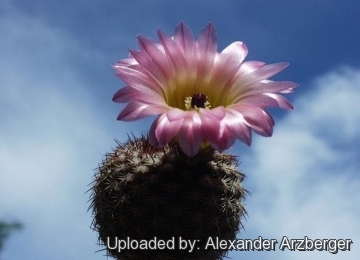 Cultivation and Propagation: It is easy to grow. It prefers a neutral to slightly acidic mineral-based potting mix with plenty of extra grit and feed during the summer. It likes a warm bright location, does great in partial shade but doesn't like full, hot blazing sun in the central summer month. Can support quite some water during the growing season but pot plants in winter are wet-sensitive and needs to be kept dry (rots easily if soil is wet and cold) tends to lose its roots in winter. Water Best if watered with rain water. Usually it is recommended to over-winter this plant in a bright and warm greenhouse with at least 8-10° C and rather dry (it tends to lose its roots and to rot if the substrate is wet and cold) but it has proved to tolerate temperatures as low as -5° C for short periods.
Propagation: Seeds.