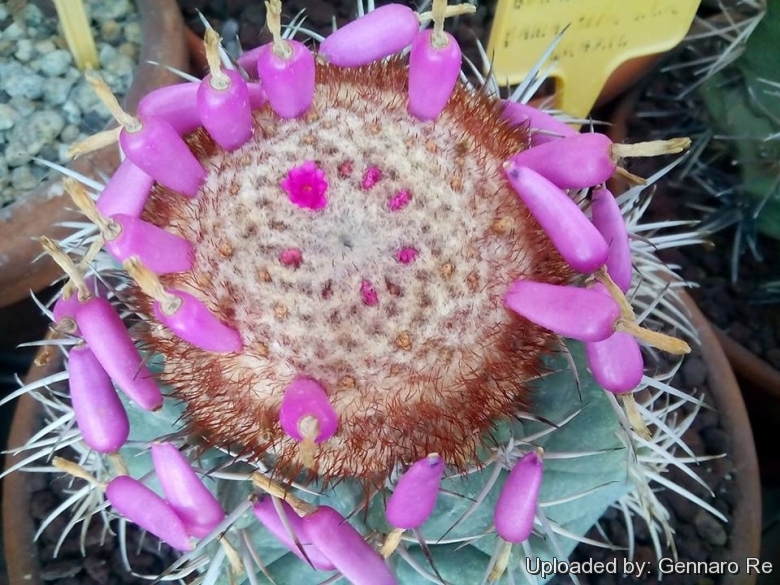 Melocactus azureus Photo by: Gennaro Re

Origin and Habitat: Central and northern Bahia, eastern Brazil.
Altitude: 450-800 metres above sea level.
Habitat: This species has a small range and is restricted to low-lying outcrops of limestone. The species occurs in subpopulations of a few hundred individuals, however, in some there are millions. Habitat loss for agriculture is a major threat, the vegetation gets destroyed when the surrounding caatinga forest is cleared for cultivation causing a continuing decline of the natural populations. Also, the change in the surrounding vegetation has an impact on the outcrops were the species grows, making them prone to invasive species.

Subspecies, varieties, forms and cultivars of plants belonging to the Melocactus azureus group 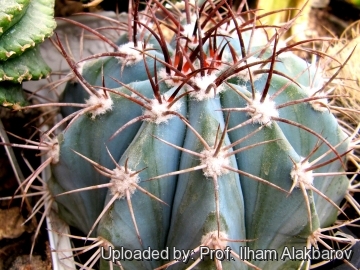 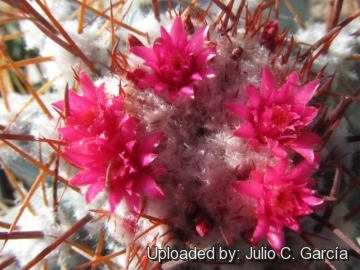 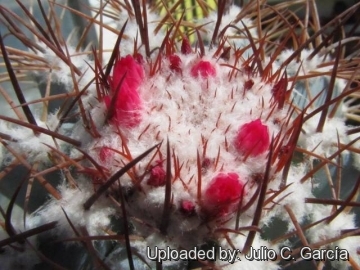 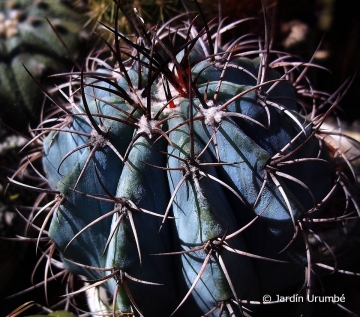 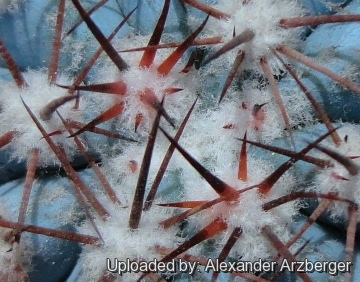 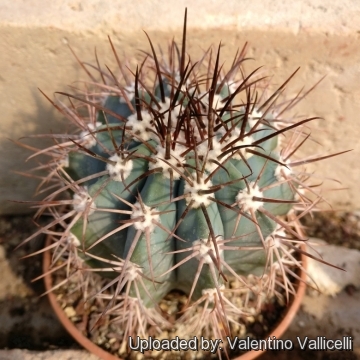 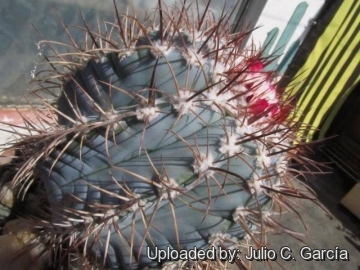 Melocactus azureus Photo by: Julio C. García
Send a photo of this plant.

Cultivation and Propagation: These tropical cacti are not the easiest things to grow and aren’t plants for beginners.
Growth rate: It is a relatively rapidly growing given the best conditions.
Soils: It likes very porous standard cactus mix soil.
Repotting: The root system is weak and generally resents being repotted and can take a long time to re-establish. Use pot with good drainage.
Light: They preferes very bright light, not as much as the most arid growing cacti, but plenty nonetheless. Tends to bronze in strong light, which encourages flowering and heavy spine production.
Watering: Melocacti grow from April to October and cannot endure long stretches of total dryness, and also too much water will rot them, as their weak root systems tends to be inefficient at sucking up water from wet soil. Nonetheless, again as a result of their tropical origins, they need a fair amount of water, but allow the soil to dry quite a bit before watering again.
Fertilization: Feeding may not be necessary at all if the compost is fresh then, feed in summer only if the plant hasn't been repotted recently. Do not feed the plants from September onwards as this can cause lush growth which can be fatal during the darker cold months.
Hardiness: Melocactus rest from October to April but can’t stand cold, or even fairly cool temperatures, so is indispensable to keep them above 8-12°C at all times, severe damage or death occurring at temperatures that the great majority of cacti wouldn’t mind in the least and prefer more frequent water in winter than other cacti, say once a month. (but hardy to 4 C ° C for short periods). However warmth throughout the year will increase the grower's success ( minimumum12° to 20° C during rest season). In the rest period no high atmospheric humidity!! (Temperature Zone: USDA 10-12)
Pests & diseases: It may be attractive to a variety of insects, but plants in good condition should be nearly pest-free, particularly if they are grown in a mineral potting-mix, with good exposure and ventilation. Nonetheless, there are several pests to watch for:
- Red spiders: they may be effectively rubbed up by misting the vulnerable plants every day
- Mealy bugs: occasionally they develop aerial into the new growth among the wool with disfiguring results, but the worst types develop underground on the roots and are invisible except by their effects.
- Sciara Flies: they are one of the major problems for seedlings. It is a good practice to mulch your seedlings with a layer of grit, which will strongly discourage the flies.
- Scales: they are rarely a problem.
It is wise to treat your whole collection with a systemic insecticide twice a year in spring and autumn.
- Rot: it is only a minor problem with cacti if the plants are watered and “aired” correctly. If they are not, fungicides won't help all that much.
Propagation: Exclusively by Seeds. Sow in February-march in a light, sandy, porous soil. Cover germinating tray with glass to prevent seed from drying out. Germination is most successful at a temperature of 18 to 22° C.