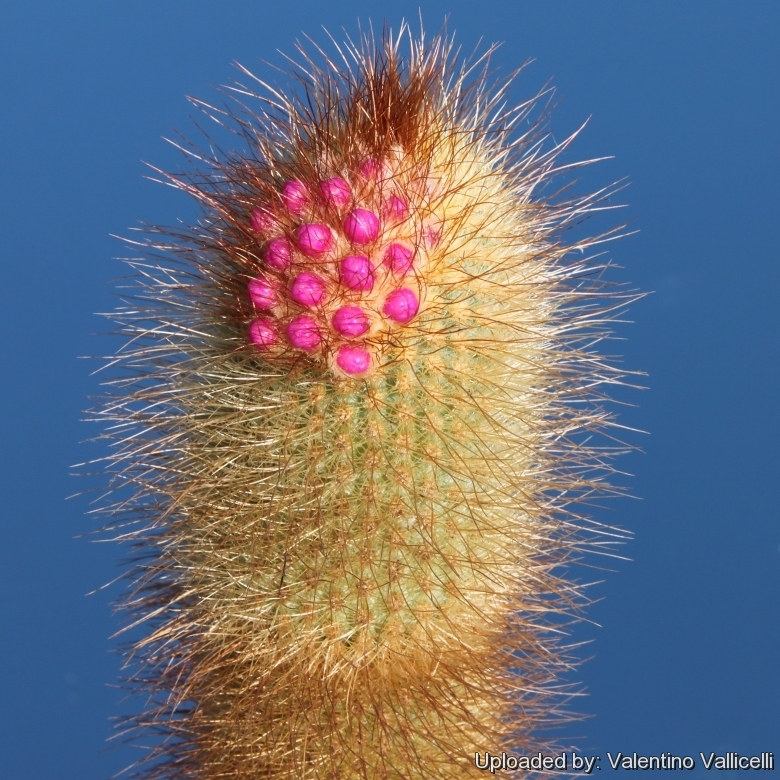 Description: Micranthocereus streckeri is a small columnar cactus that branches quite freely from the base (occasionally from higher up), and soon makes a nice clustered specimen, reminiscent of Cleistocactus. The flowers are produced from a a loose and open lateral pseudo-cephalium (modified zone on side of the stem, where areoles develops extra bristles), it is by far the most floriferous species in the genus.
Stems: Short columnar, up to 70 cm tall, and 5,5 cm in diameter, erect, bright blue-green to gray-green, later brownish.
Ribs: About 25, shallow and closely set.
Areoles: Oval, with brownish wool and whitish hairs.
Spines: About 30, dense, fine, needle-like, flexible, yellowish, up to 2,3 cm long with a few bristles up to 10 cm long.
Pseudo-cephalia: Lateral, along the side of the stems near the apex facing the strongest sunlight, well developed, up to 20 cm long and 3,5 cm wide, with dense areole growth, yellowish brown wool to 1,3 cm long, reddish brown bristles to 2,4 cm long, and a few spines. The blossoms emerge from this “cephalium''.
Flowers: Small (“Micrantha'' means small flowers.), up to 22 mm long and 4 mm in diameter, produced in large numbers in clusters, tube-shaped, opening at night, outer perianth segments bright pink to purple, the inner paler. Pericarpel without scales.
Blooming season: Late autumn or early spring and will flower at a relatively small size.
Fruits: Small (1-1,1 cm long and in diameter), juicy, berry-like, top-shaped, purple and without scales. 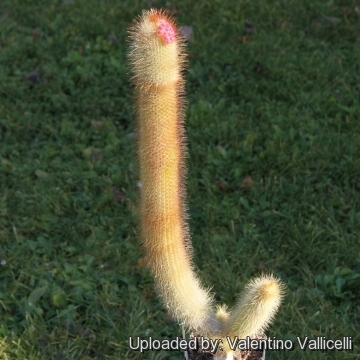 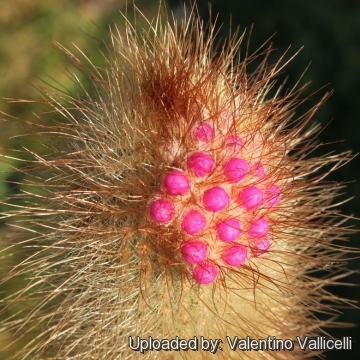 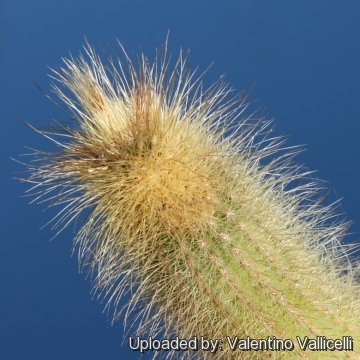 Micranthocereus streckeri Photo by: Valentino Vallicelli
Send a photo of this plant.

Cultivation and Propagation: Micranthocereus streckeri is not particularly difficult on own roots providing it is given a little extra heat during the winter, but this and all its relatives do best when grafted.
Growth rate: It is a relatively rapidly growing and easily flowering species that will make clumps given the best conditions.
Soils: It likes very porous standard cactus mix soil.
Repotting: Use pot with good drainage.
Watering: It should be watered generously during the growing season. Like Cleistocacti, they can exhibit tip die-back if not enough water is given, but do not overwater (Rot prone), keep dry in winter. Water them less than average if in bigger pots, small pots preferred.
Fertilization: Feed with a high potassium fertilizer in summer.
Hardiness: Reputedly sensitive to frost, but less so if kept on the dry side prior to, and during, cold weather. However warmth throughout the year will increase the grower's success (8-12°C during rest season).
Exposition: Outside bright, hot conditions or afternoon shade, inside it needs bright light, and some direct sun. Strong light encourages flowering and heavy wool and spine production.
Uses: It is an excellent plant for container growing. It always looks good and stays small.
Pests & diseases: It may be attractive to a variety of insects, but plants in good condition should be nearly pest-free, particularly if they are grown in a mineral potting-mix, with good exposure and ventilation. Nonetheless, there are several pests to watch for:
- Red spiders: Red spiders may be effectively rubbed up by watering the plants from above.
- Mealy bugs: Mealy bugs occasionally develop aerial into the new growth among the wool with disfiguring results, but the worst types develop underground on the roots and are invisible except by their effects.
- Scales: Scales are rarely a problem.
- Rot: Rot is only a minor problem with cacti if the plants are watered and “aired” correctly. If they are not, fungicides won't help all that much.
Propagation: Division, direct sow after last frost or (often) graft. Seeds germinate in 7-14 days at 21-27° C in spring, remove the glass cover gradually as the plants develops and keep ventilated, no full sun for young plants! To make a cutting twist off a branch and permit it to dry out a couple of weeks, lay it on the soil and insert the stem end partially into the soil. Try to keep the cutting upright so that the roots are able to grow downward.