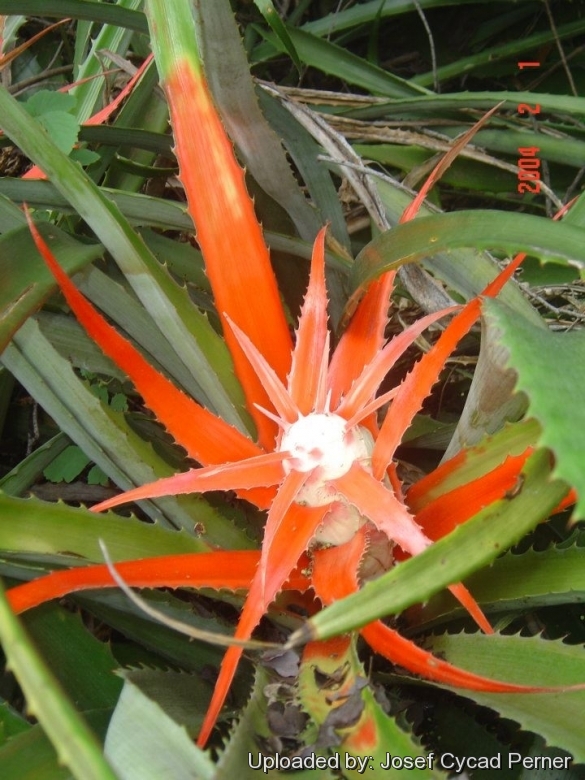 Madvigia humilis (Bromelia humilis) Photo by: Josef Cycad Perner
Blooming habit at Cycad International, Katherine, Northern Territory, Australia. I have a couple of specimens in pots now, still hard to contain, the in ground planting was removed as too agressive and spreading.

Origin and Habitat: Venezuela, (possibly in Suriname too), Trinidad & Tobago, Aruba and the Netherlands Antilles.
Habitat and ecology: Bromelia humilis grows in highly seasonal, hot and often infertile habitats across shady to fully exposed microsites in coastal strand and inland habitats in northern Venezuela. It also extends from several hundred meters above on to low-lying, salt-laden soils along the south Caribbean coast, close enough to the surf to regularly intercept salt spray. These societies of Bromelia humilis are often found to consist of numerous leaf rosettes connected to one another by dried stolons. Roots enter the ground only rarely and the whole mat of rosettes can usually be simply lifted from the rocks or gravel on which it lies, and from which it is evidently wholly independent for nutrition or water supply. The leaf bases are expanded and overlap, and in this way form a series of niches which retain rainwater and dew. The water that collects in these spaces between leaf bases is usually dirty and contains numerous insect larvae as well as decaying leaves that have dropped on to the plant. It is this water and its humic content which constitutes the plant's nutrient supply, and this is exploited by a rich system of axillary roots which grow upwards between the overlapping leaf bases to reach the water. Some authorities considered Bromelia humilis fundamentally heliophilic, while other investigators view this species overall as shade-tolerant through derivation from forest-dwelling stock. The plants exhibit greater productivity in partial than in full sun, and if located in certain overexposed Venezuelan coastal habitats it seldom flowers, and most of its ramets abort.

Description: Bromelia humilis is a terrestrial bromeliad that makes a neat plant with its great number of narrow, spiny-edged leaves forming a somewhat flattened rosette. When in bloom, the central leaves surrounding the inflorescence turn a deep cardinal red colour making it very showy. The actual flowers are somewhat hidden down in the very middle of the plant; however, the wooly white covering of the flower-head is conspicuous.
Habit: B. humilis, as its name implies, is one of the smaller of the species with a relatively small, rosette barely reaching 50 cm in diameter, often growing in closed groups and propagating by leafy stolons over a meter long. It is a hemicryptophyte, that is to say, a perennial herb that bears its overwintering buds at soil level, where they are often partly covered by surface debris.
Branches (stolons): Leafy with thorns up to 1 (or more) m long.
Leaves: Densely rosulate, simple, tough-leathery, 20-50 cm long, 15-30 mm wide, widest at the base, running of into a very scharp point, faintly caniculate, the outer recurving, the inner suberect and usually tinged with bright red or purple when flowering. Leaf margin laxly spinose-serrate with 3-4 mm long scharp, hooked thorns, which are irregularly pointing inwards and outwards. Sheath triangular-ovate, tomentose-lepidote or glabrous.
Inflorescence: Nearly sessile, in the heart of the plant, densely corymbose, flattened, circle shaped, densely white-lanate, few-flowered. Floral bracts red and white lanceolate to linear, equaling the sepals.
Flowers: Purple 5-7 cm long, standing in clusterd white hairs. Sepals free, oblong, obtuse, cucullate, 20-25 mm long, entire. Tepals linear to obovate, obtuse, 40 mm long, connate for ⅓ their length, purple at apex, white below, glabrous. Stamens yellow. Ovary beneath, cylindrical.
Bloom Season: Early to late summer.
Fruit: Fruit a yellow fleshy berry.

Cultivation and Propagation: Bromelia humilis is a valuable ornamental bromeliads due to the beauty of the foliage and of the inflorescence and the facility of cultivation. The leaf turns red when flowering. The flower is white and purple and not very conspicuous. It a good ground cover in xeric gardens, but the spines are wicked as some pineapples (Ananas). They may form a low ground cover that will keep the neighbor's dog out if it is wide enough. This species will grows on rocks or on top of the ground but it will grow faster if rooted in well drained soil.
Growing substrate: It requires a well-drained, aerated, gritty, humus rich, neutral to acidic, and moisture-retentive substratum (e.g. 2 parts peat moss to 1 part loam to 1 part sand or perlite).
Exposition: It will grow in any exposure from full sun to full shade. Growth is faster and the leaves are more rigid in full sun..
Watering: In summer it enjoys constant moderate waterings from rain or sprinkler, but allow the plant to dry in-between waterings, and reduced in winter. However it is quite drought-tolerant. Requires complete and perfect drainage as root rot can be a problem if the soil is too moist.
Fertilizing: Fertilize every 4-week during the growing season with a balanced fertilizer diluted to ½ the strength recommended on the label. Apply mild solutions (one-quartet strength) of foliar fertilizer at 3-month intervals to both garden and container plants.
Hardiness: This Bromelia does not like the cold. It is cultivated in open air in the tropical and subtropical climate countries, with temperatures which it is good to keep over the 14°C, best 20-24°C , but can withstand light frost for short periods if very dry (hardy down to -2 to -6º C, even if with damage to the foliage) in these situations it will better resist if sheltered by the winter rains, seen that the humidity and low temperatures render it more sensitive to rottenness. Plants in containers however, suffered major leaf loss. USDA Zone 9b to 11
Pest & diseases: It is susceptible to scale, trips and mosquitos that will sometimes breed in the pools of water that are trapped between the leaves. Mealybugs infestations and fungal leaf spots are also a frequent problem.
Pruning: Remove old leaves from plant base and dead ﬂower spikes only. Remove older plant crown when it begins to fade.
Ornamental uses: Useful as a border or groundcover.
Propagation: Remove and replant offshoots from around the parent plant in late spring or early summer. Sow seed at 27ºC as soon as ripe.
Warning: The edges of the leaves are incredibly armed with sharp teeth and never fail to draw blood so use extreme caution when handling.