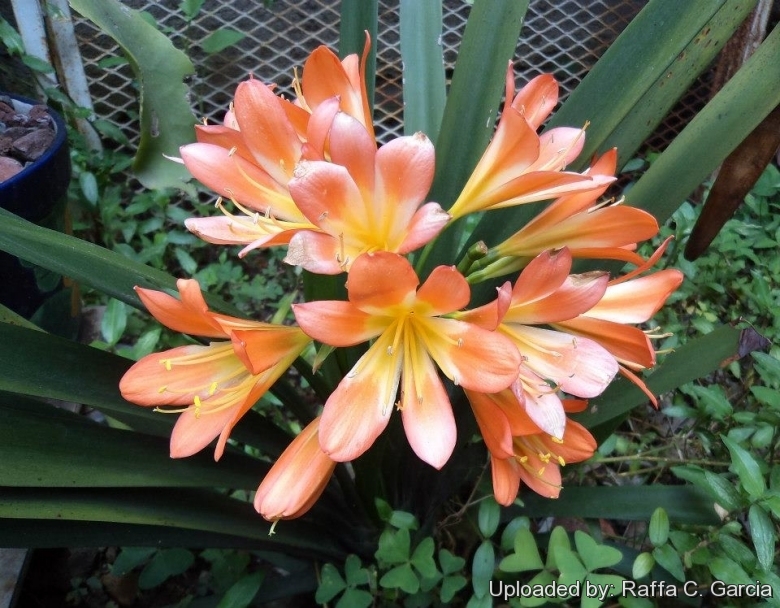 Origin and Habitat: Morgan's Bay in the Eastern Cape Province up into northern KwaZulu-Natal and Swaziland.
Habitat: Always found under tree cover in forests growing in leaf mould on the forest floor, and between boulders on slopes. Only found where the soil is rich with humus and well-drained.

Description: It is a very popular plant commonly known as the bush lily or fire lily and has orange flowers with yellow throats and wide large dark green leaves. Clivia is related to the common Amaryllis. However, unlike Amaryllis, Clivia retains its foliage year round and is thus a valuable and decorative houseplan
Stem: The stem of the Clivia miniata is a compact rhizome which only rarely becomes aerial when plants are very old. It sucker freely and can form large clumps if left undisturbed.
Roots: Swollen, succulent.
Leaves: 50 mm to 90 mm wide. Up to about 1 metre in length (or more)
Flowers: Small to large and trumpet-shaped with broad overlapping tepals, with a faint, but very sweet perfume. The inner tepals are usually broader than the outer tepals. The normal colour of the flowers is orange with a yellowish-white throat, although a colour range from whitish yellow through pale oranges, dark orange and approaching red is known. The very light and very dark colours are, however, rare. The flowers are borne in an umbel supported by a peduncle which clears the leaves, and the umbels can have in excess of 40 flowers, although 20 is more usual.
Blooming season: Spring to summer, once the flowers are mature which will be in approx 3 years.
Fruits: The seeds are carried in berries which can have from 1 to more than 20 seeds in a berry, although less than 10 is the norm.

Subspecies, varieties, forms and cultivars of plants belonging to the Clivia miniata group 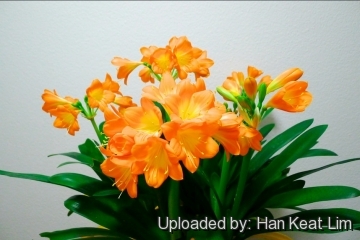 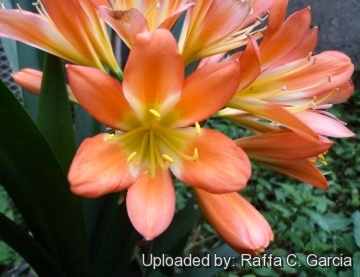 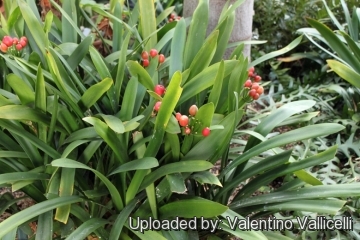 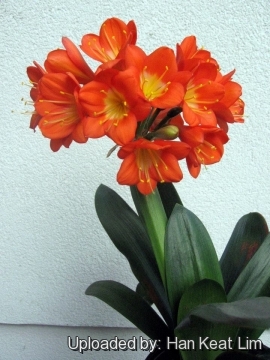 Cultivation and Propagation: Clivias are outstanding houseplant; easy to grow, need little care and flower late winter. Few plants flower so brilliantly in the shade as the clivias, and the flower stems can be cut for arrangements, too.
Exposure: Be aware that full sun will burn the leaves. They need some shade and require far less sun than most flowering plants. They will grow well under trees, on the north side of your house, in a shaded area in the greenhouse or in rooms of your house that receives indirect light or curtain filtered light.
Soil: Clivias should be potted in a rich, but well well-drained soil (for example: peat, fine pine bark mulch and lava great ) a pH 5.5-6.5 best suits them. The soil should never become soggy or water sodden, but should drain well even when watered often.
Repotting: Clivias bloom and perform best when allowed to become rootbound, so don’t overpot them in a pot that is too large, they really love being crowded in a pot, so leave them undisturbed for many years. When you repot your clivias place one or more small, empty pots upside down on the bottom of the container will enhance drainage. Do not plant them too deep! The roots should be covered with only a 0,5 cm of soil.
Watering: Regular irrigation is beneficial.
Feeding: Use balanced slow release fertilizer, every three months, but any complete fertilizer will do.
Temperature: USDA ZONE 9-10. If they are kept at room temperature and watered year round they will grow into lovely plants, but they will not flower. Inducing them to flower is easy. In the Fall and Winter keep them cool 10° C. Keep them dry to interrupt the growth cycle and initiate bud formation. Do this from November until January giving water about once a month. Then water less sparingly until flower buds appear after which they can be displayed anywhere. They are a very welcome sight in late Winter. Once your plant blooms the first time, it will usually bloom about the same time each year.
Traditional medicine: The rhizome is used by the Zulu to treat fever. The whole plant is used to help with childbirth and to hasten parturition. The rhizome is also a snake-bite remedy and it is claimed to relieve pain.
Warning: The rhizomes of Clivia species are extremely toxic due to the presence of lycorine and other alkaloids, making it poisonous. Their continued use should be strongly discouraged.
Pruning: Remove old leaves and stems.