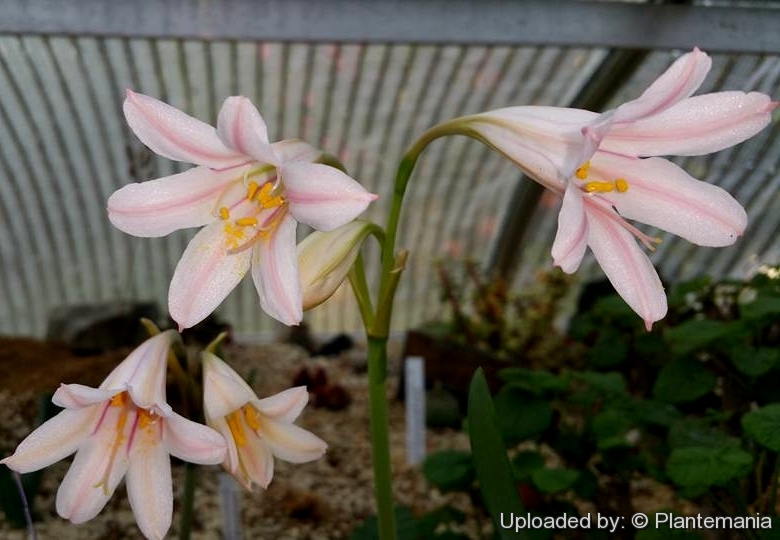 Origin and Habitat: Cyrtanthus smithiae is widespread in the eastern Cape Province of South Africa.
Habitat and ecology: It is a geophyte that grows in open arid grassland and in valley thicket vegetation. In most habitats, the bush in which they occur has been heavily grazed by goats and is mostly in a very degraded state. Plants often survive only under thick, thorny shrubs where the goats can’t reach them. Development of agriculture is also a thread.

Description: Cyrtanthus smithiae is a deciduous, bulbous plant with two to six fairly large bell-shaped, lily-like flowers on stems up to 30 cm tall. Flowers are cream-coloured or in various shades of pale pink and all have the typical darker pink, red or brown stripes along the mid-line. It is very variable and occasionally with a slight yellow tinge and greenish candy-stripes. The very attractive, relatively broad, "corkscrew" foliage is also beautiful in itself. The inflorescence appears promptly in early summer together with the new foliage. It is a very floriferous species. Cyrtanthus smithiae is similar to Cyrtanthus helictus and there has been some confusion between the two.
Bulb: Ovoid, 4 cm in diameter.
Leaves: 2–4, contemporary with the flowers, linear, spirally twisted, rather glaucous, 15-27 cm long, 6 mm broad. Peduncle slender, terete, 15 cm long.
Flowers: 1–2 in an umbel. Pedicels 2.5-4 cm long; spathe-valves 2, lanceolate. Perianth 8-10 cm long, white streaked with green or red-brown; tube slightly curved, dilated gradually from the base to a throat an inch in diameter; segments oblong, 25 cm long, with 5–7 fine distinct ribs in the centre, decurrent down the tube. Stamens biseriate. Filaments filiform, 12 mm long; anthers yellow, oblong; ovary oblong, green, 4 mm in diameter. Style much overtopping the anthers; stigmas 3, spreading.
Bloominig season:Late spring to early summer (in habitat mainly from late October to December, depending on rain).
Taxonomic note: Two years after- Harvey's description appeared, Herbert (1840) published Cyrtanthus smithianus Herbert, based on the same collection.

Cultivation and Propagation: Cyrtanthus smithiae is one of the less difficult members to cultivate successfully over an extended period provided it is kept absolutely dry in winter, and watered rather infrequently in summer. It is often evergreen in cultivation but needs to be kept almost dry during its dormancy as the bulbs is disposed to dwindle and rot.Water sparingly when growing and a little care, it is a definite water-wise species. Coarse river sand or gravel must be incorporated into the growing medium for excellent drainage. This species is particular suitable for hanging baskets; it is reported to be easier to get to flower than some of the species.