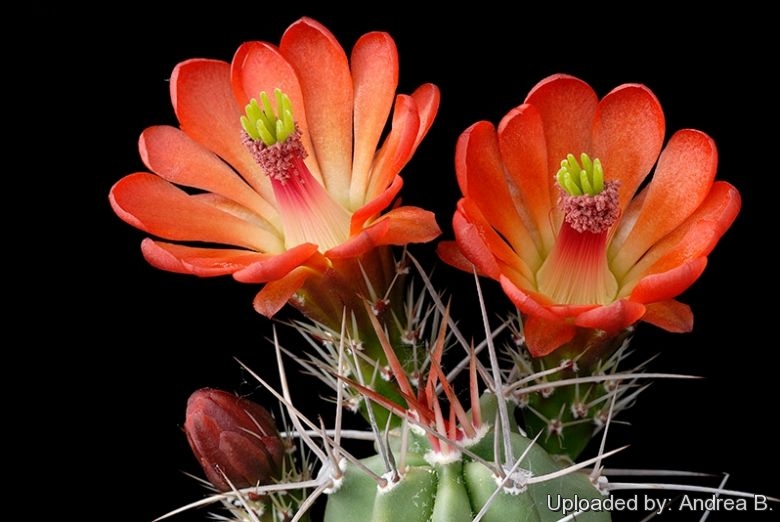 Echinocereus triglochidiatus Photo by: Andrea B.
The glorious flower colour of the ''Hedgehog Cactus'' rivals that of the desert sunset. The flowers are a beautiful deep red, with many petals that form the shape of a cup. They bloom from April through June, and are the first to bloom in the desert.

Origin and Habitat: E. triglochidiatus is the most widespread species (Nevada, Utah, and Colorado south to southern California, Arizona, New Mexico, Texas, and Mexico).
Altitude range: It can grow in elevations from 150 to 3500 metres above sea level.
Habitat: It is a resident of many varied habitats in the upper edge of the Mojave Desert, from low desert to rocky slopes, xerophyllous scrub, pine-oak forests, coniferous forests, rocky or grassy hillsides, ledges, and canyons mostly igneous and sometimes calcareous rock outcrops and cliffs in loamy-sandy soil, in humus pockets and in red loam soil. It is most abundant in shady areas. These plants can grow in colder climates because the stems clump so closely together. This reduces surface area through which it can lose heat. The species is pollinated by hummingbirds and probably bees. Echinocereus triglochidiatus has a very wide range, is abundant, and there are no major threats.

Description: In general it is a mounding cactus, forming bulbous piles of from a few to hundreds of spherical to cylindrical stems. Plants may vary from densely spiny (usually) to no spines at all. Echinocereus triglochidiatus is the most wide-spread of the Echiniocereus species and is also the most variable in appearance. In fact, the several varieties are so different-looking that the only uniting factor is the bright red bloom and rounded petals.
Taxonomy: A distinct species with two subspecies, the nominate form and subsp. mojavensis (Engelm. & J.M.Bigelow) L.D.Benson.
Stems: Usually erect, spherical or cylindrical, 3-70 cm tall, 5-13 cm in diameter.
Ribs: 5-8 or 8-12, crests slightly undulate (some populations contain plants with strongly interrupted ribs).
Areoles: 10-40 mm apart, and somewhat woolly.
Spines (0-)3-11 per areole, with central spines being difficult to distinguish from the radial spines. Straight to curved or contorted, appressed (radial spines) or spreading to projecting outward (some radials, and central spines when present), white to yellow, grey, or sometimes nearly black, but those turn whitish-grey after their first season.
Radial spines: (0-)1-10 per areole, (0-)15-90 mm long; Spines are at first yellow, pink or black.
Central spines: 0-1(-4) per areole, angular, (0-)50-120 mm long.
Flowers: Diurnal, funnel-shaped, 5-10 × 3-7 cm; flower tube 20-35 mm; flower tube hairs 1-2 mm; inner tepals bright orange-red to dark red, proximally paler (bases sometimes yellow or white), 25-40 × 10-15 mm, tips thick and rigid; anthers usually pink to purple. There is a thick nectar chamber and many thready pink stamens at the center of the corolla. The flowers are pollinated by hummingbirds.
Fruits: Juicy, with deciduous spines, and edible, green to yellow-green or pink (rarely red), (15-)20-35 mm, pulp white, fruiting 2-2.5 months after flowering.
Blooming season: Apr-June, the flowers remain open for 2 or 3 days. Blooming generally begins 5 to 10 years after sowing, as the plant matures.
Remarks: A spineless form (var. inermis) has been applied at various taxonomic ranks to individual plants with spines absent or nearly so in the eastern portion of var. mojavensis, mainly found in the mountains and mesas of western Colorado and eastern Utah. On these plants, areoles may have very few spines and some stems can be almost completely spineless, but the same plant will have spined stems and many spines per areole in another area.
Chromosome number: E. triglochidiatus is consistently diploid (2n = 22), apart from the tetraploid (2n = 44) Echinocereus coccineus Engelm., which has been treated as conspecific by some previous authors (Benson, 1982; Taylor, 1985). The var. triglochidiatus has been previously reported as var. gonacanthus (Engelm. & Bigelow) Boissevain and perhaps under other names as well.

Subspecies, varieties, forms and cultivars of plants belonging to the Echinocereus triglochidiatus group

Notes: Echinocereus triglochidiatus is the earliest name for a large group of diploid and polyploid taxa treated as conspecific by L. D. Benson (1969, 1982). The tetraploids are now recognized as a distinct species: E. coccineus, including E. polyacanthus Engelmann of Mexico. A geographically distant tetraploid, Echinocereus coccineus var. paucispinus, superficially resembles some eastern E. triglochidiatus but may be distinguished by its relatively terete and more consistently straight spines. 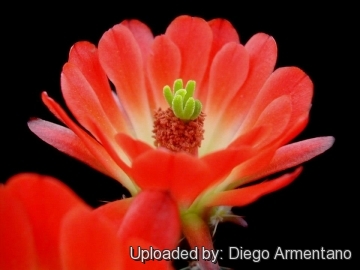 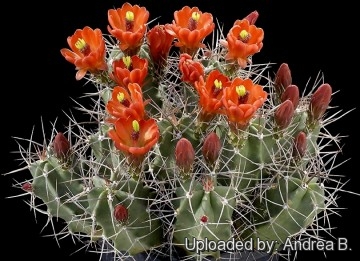 - It is a beautiful plant with long-lasting, waxy, scarlet flowers, which make it a favorite among gardeners.The flowers are pollinated by hummingbirds. Photo by: Andrea B. 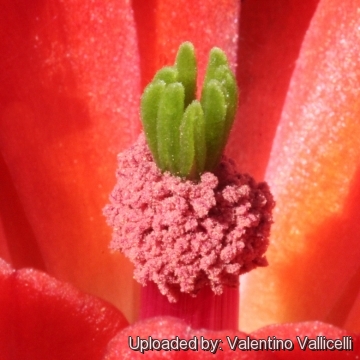 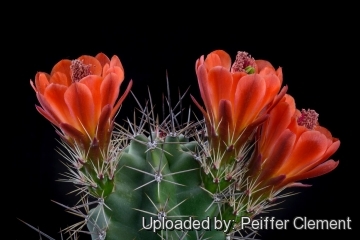 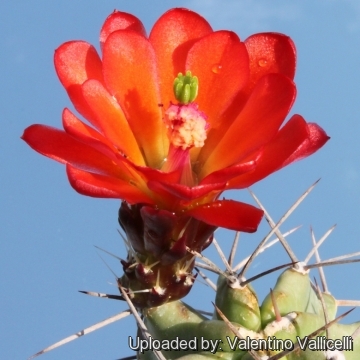 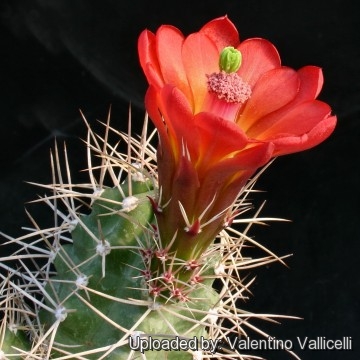 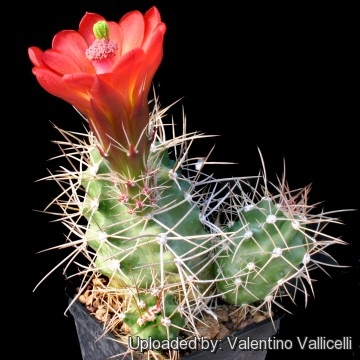 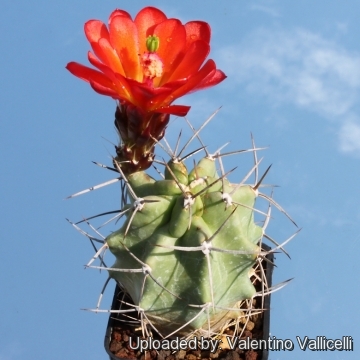 Cultivation and Propagation: Cultivation: This cactus is widely cultivated for its flowers. It is among the easiest species to grow, flower and propagate. Water regularly from March to October. Rot prone in winter, it needs good drainage. Claret Cups require strong sunlight to maintain a healthy appearance, and a harsh "dry and cool" winter environment combined with maximum light exposure enhances spring flower production.
Frost Tolerance: Depends on the variety: Var. arizonicus is hardy to -6° C, the other varieties are much more cold resistant (some populations can tolerate temperatures down to -25° C or less)
Uses: Some Native Americans collect the stems, burn off the spines and mash them. Sugar is added and then it is baked to make sweet cakes.
Parts Used: pulp, flowers and stems