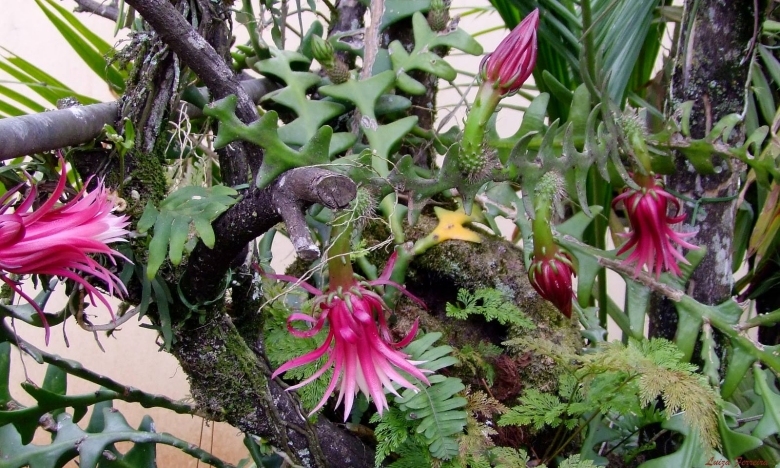 Origin and Habitat: Selenicereus anthonyanus has a fairly wide range in the Mexican states of Chiapas, Oaxaca, Tabasco and Veracruz.
Altitude range: 180-700 metres above sea level.
Habitat and ecology: The species grows in lowland rainforests. In addition to a slimmer leaf-like appearance, the photosynthesising stem of this plant produces small adventitious roots along its surface that allow it to grip on to trees and climb as high as possible to obtain maximum light, but is adaptable to terrestrial habits. It is relatively common where found, though not very abundant and the threats are not severe enough to warrant a threatened listing. The main threat is deforestation for cattle ranching.

Description: Selenicereus anthonyanus (formerly Cryptocereus anthonyanus) is a perennial climbing succulent, forming branches in clusters. The stems are flat, like an Epiphyllum, but with alternate projections on each side. The stems can grow up to 50 cm or more, and often curved downwards. It is very difficult to get to bloom, but if one is lucky the results are spectacular, the nightblooming flowers have white, pink and red petals and are very beautiful. The buds are big 10 cm long and the flowers are huge 15 or more cm wide and sweetly scented. S. anthonyanus is an isolated species with no close allies, Selenicereus chrysocardium seems to be the closest relative. Two other epiphytic cacti from other genera show similar strongly notched flat stems and which, when not in flower, are not readily distinguishable from this species: these are Epiphyllum anguliger and Weberocereus imitans, but S. anthonyanus has flowers with a stouter, much shorter tube and bristly pericarpel.
Derivation of specific name: This species is named for Dr. Harold E. Anthony who first flowered this species in June 1950.
Stems; Scandent or climbing, bright green, to yellowish green, smooth to 1 m or more long, 7-15 cm wide, somewhat tapered and rounded apically, flat with few aerial roots and deeply lobed, the lobes 2.5-4.5 cm long, 1-1.6 cm wide, rounded at apex. Branches in clusters at intervals along the stem.
Areoles: Small, recessed in the sinus near the central nerve.
Spines: 3, short.
Flowers: Nocturnal fragrant, cream colored, 10-12 cm long, 10-20 cm in diameter. Pericarpels 15–20 mm long, with many small tubercles bearing olive green bracteoles 1–2 mm long, their axils with grey wool, greyish-brown bristles and stout, pale brown spines, 1–3 mm long.Receptacle 3–4 cm long, 1–5 cm across, cylyndrical, bracteoles 3–6 mm long, ovate-lanceolate, the lowermost with wool and bristles, the upper naked, the uppermost 8–10 mm long, madder purple. Outer tepals outermost 1–2 cm long, similar to bracteoles, inner 6 cm long, spreading-recurved, lanceolate, purple; intermediate tepals 5, lanceolate, acute; inner tepals ca 10, 6 cm, lanceolate-acute, erect-spreading, cream, outermost cream with lower margins purple. Stamens short, 15 mm long, yellowish. Style 6,5–7 cm long, 6 mm thick above the throat, in the throat abruptly contracted to 4mm thick, cream, stigma lobes 12-14, lanceolate, 16–18 mm long.
Blooming season: S. anthonyanus blooms only once a year, however, and only for one night in late spring or early summer. It is common that specimens rare or never flower, but when they do so, they are usually rootbound in poor soil, then can produce many blossoms, which begin to open right at dusk, releasing a pleasing fragrance intended to attract nocturnal pollinators. Pollination in this species is not completely understood, but it is believed that bats are responsible for pollination.
Fruit; Ovoid, 6 x 5 cm long, fragrant, areoles 4 mm with spines 1–2 cm, dark green.
Seeds: 2 x 1,5 mm, black. 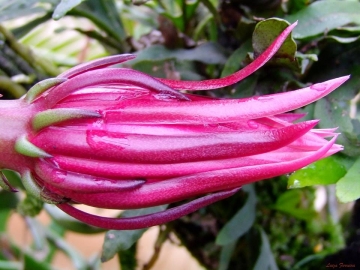 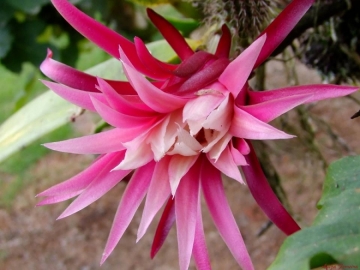 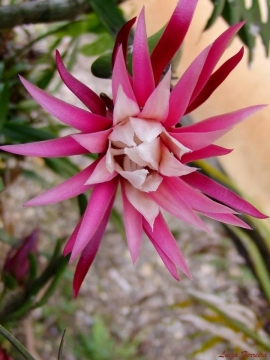 Cultivation and Propagation: Selenicereus anthonyanus is grown as an ornamental because of its beautiful nocturnal flowers and unusual stems. It is an easy, fast growing epiphyte plant. It is most frequently cultivated as a house plant (in pots and hanging baskets). It rarely planted outdoors in tropical countries, where climbs trees in a semi-naturalized state. In nature it climbs into trees. Older plants in the greenhouse buds freely. It can be trained to climb a trellis, but looks best in a hanging basket from whence the lightning-shaped leaves will dangle 60- 90 cm over the edge. Because the flowers are so quickly spent, this epiphyte is mainly only grown for the strange leaves which lend it the common name Ric-Rac Cactus, or occasionally Zig-Zag or Fishbone Cactus.
Soil: It needs a compost containing plenty of humus and sufficient moisture in summer (though quite adaptable) it can be also cultivated on split bark like Monstera or in orchid substrate.
Moisture: The plant is quite resistant to drought condition, but shouldn't dry out totally otherwise it will turn purplish brown and look unpleasant and should be permitted to dry out entirely between waterings. The adventitious roots - those wiry white things - are a good indicator of whether or not it's satisfied with the amount of water it's getting. They absorb ambient moisture and if the soil is too dry, they will reach out to grab as much moisture from the air as they need. So don't prune them off because you consider them unsightly.
Fertilization: Too much fertilizer will cause a lot of lush growth at the expense of flowers.
Hardiness: Should not be kept under 5º C in winter.
Exposition: It perform best if grown in semi–shade but tolerate full sun. Extra light in the early spring will stimulate budding.
Propagation: By cuttings rootted in moss as an epiphyte.