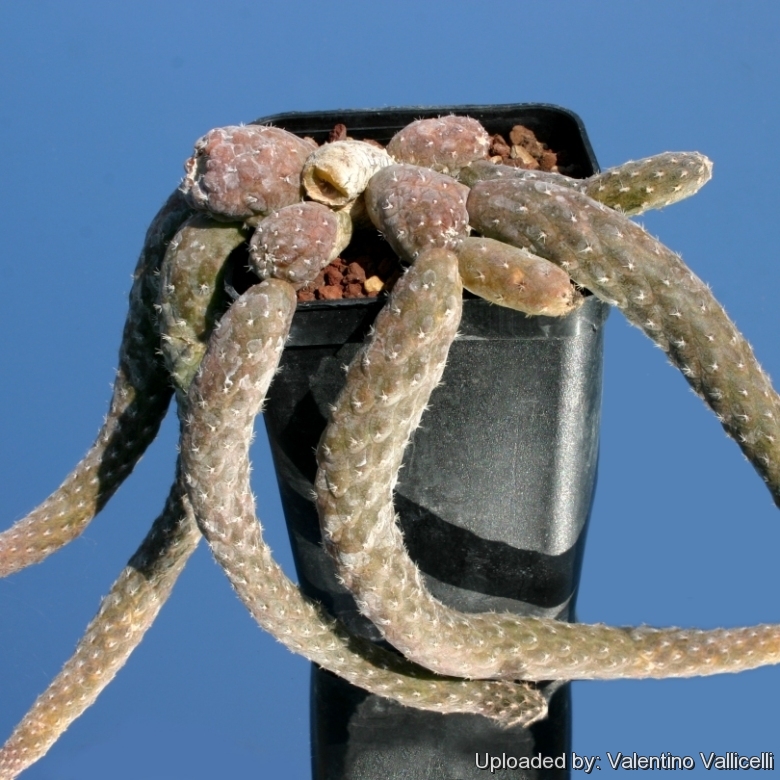 Pterocactus reticulatus Photo by: Valentino Vallicelli
Note that the longer stems arise from the areoles of old flowers calyx.

Origin and Habitat: Mendoza, San Juan - Argentina (South America)
Altitude range: Pterocactus reticulatus grows at elevations of 1,500 to 3,000 metres above sea level.
Habitat and Ecology: The species grows in monte shrubland. This species has a wide range, is abundant, and there are no major threats. It also occurs within a protected area.

Description: Pterocactus reticulatus is a small clumping cactus with large undergroung tuberose root.
Stem: Formed by brown, olive green, greyish-purple or whitish-grey segments. The side segment are (ususually) unbranched, rather thick up to 2 cm in diameter, 2-3 cm long, globose to pear shaped with a net-like (= reticulate) pattern of romboid tubercles.
Root: Tuberose up to 20 cm long.
Glochids: Very small.
Central spines: One (but usually absent) erect up to 5 mm long.
Radial spines: Very few (up to 6) or absent, pectinate, whitish to brownish, 2 to 5 mm long.
Flower: Up to 5 cm in diameter. Pearl-white with a pale pink tinge with a dark-red stigma. The flowers are at the tip of side segments and hardly at the tip of the main segments like those of Pterocactus megliolli.
Fruits: Borne laterally, often the bigger than the sterile segments. Globose up to 2,5 cm in diameter.

Notes: Like for trees that lose their leave in autumn the pterocati lose annually their aerial part (segments) in a controlled way using a layer of bark to seal the subterranean, living root-stock or keep their branches alive until harsh conditions kill them, and then the grower throws the plants out, not realizing that the root is still healthy. The best thing to do when pterocati begin to dye back is to stop watering them and let them stay dry and dormant. A few month later they will sent up a shoot on their own. When that shoot appears, resume watering. 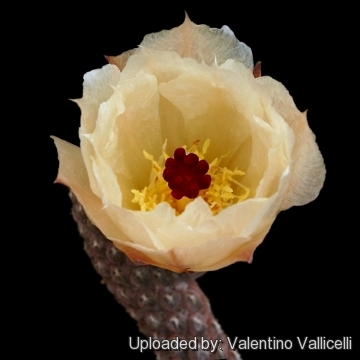 Dark-red stigmata are typical for this species. Photo by: Valentino Vallicelli 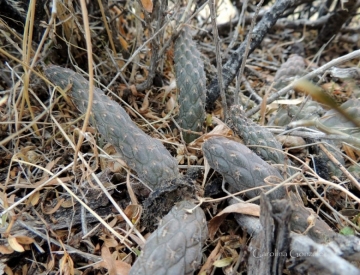 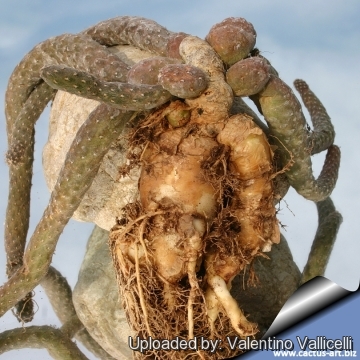 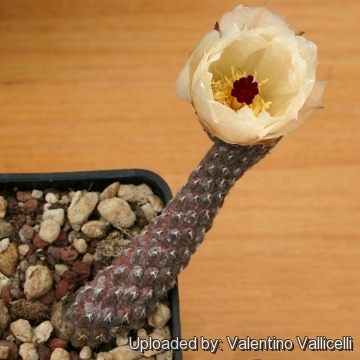 The pearl-white with a pale pink tinge flowers forms apically at the tip of lateral stems. Photo by: Valentino Vallicelli 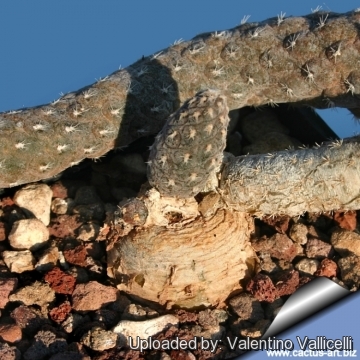 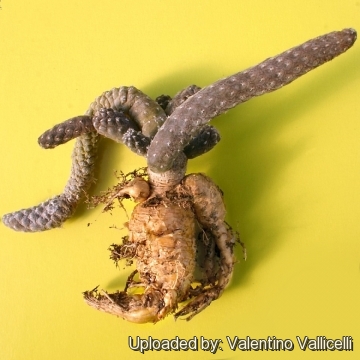 Cultivation and Propagation: Pterocactus reticulatus is easy to grow, provided it is kept cool, but dry during autumn and winter. It is a particular favourite of caudiciform plant enthusiasts.
Growth rate: Plants grow very slowly and caudex take many years to enlarge. Clustering in cultivation, if grown correctly, it will reward the grower with generous displays of flowers.
Caudex exposure: The remarkable tuberous rootstock (caudex) is often raised above the soil line so that this can be seen and more readily appreciated. For best results the tuber must be exposed only when plans become mature enough, usually after several years of underground growth, as the exposed caudex will no longer increase in size once it has been lifted above the soil line.
Potting medium: Use a cactus mix or add extra perlite or pumice to regular soil potting soil. A gritty, very free-draining compost is suitable, and clay pots help the plants to dry out between watering. For best results, use a deep pot.
Fertilization: Need a perfect fertilizer diet in summer. Use preferably a cacti and succulents fertilizer with high potassium content including all micro nutrients and trace elements or slow release fertilizer.
Watering Needs: Water normally in the growing season from March to October. No water should ever be allowed to stand around the roots. Keep almost completely dry in winter. The swollen caudex makes it very tolerant of under watering.
Hardiness: It is quite frost resistant if kept dry, hardy as low as -15° C. It can be grown outdoors in the summer months to benefit from direct exposure to light, and especially exposure to high summer temperatures. Recommended Temperature Zone: USDA 9-10.
Sun Exposure: It is essential to give full sun; otherwise they will become atypical. If grown in full sun, the new growth will flower profusely in spring and summer.
Rot: Rot it is only a minor problem with pterocacti if the plants are watered and “aired” correctly. If they are not, fungicides won't help all that much. The plant turns immediately to mush when over watered, or watered out of season. Care must be given in watering, keeping them warm and wet while growing, and cooler and dry when dormant.
Maintenance: Most of the slender stems become detached during winter, but some advise to help the plant by pruning all the top growth in autumn, to encourage it to produce stems with terminal flowers in the spring.
Reproduction: Seeds or cuttings. The seed should be planted in spring. Germination usually occurs within about one week to one month. Seed germinate at 15-21 °C.