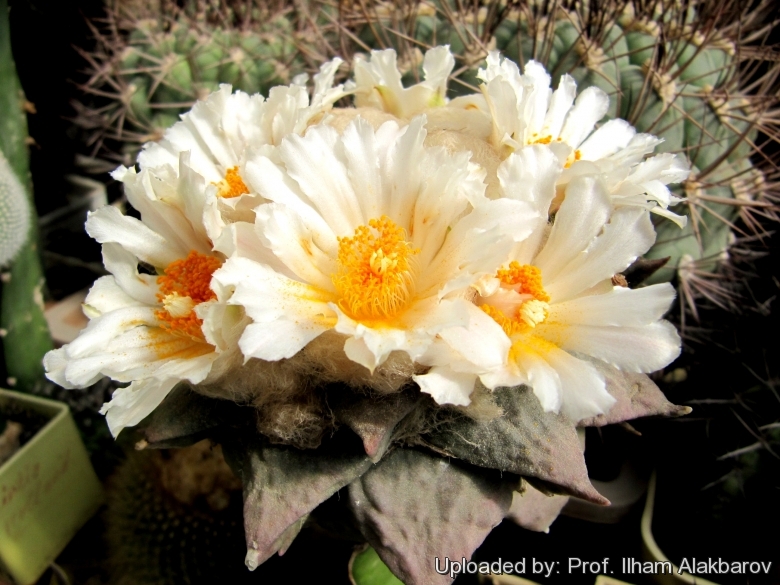 Ariocarpus furfuraceus Photo by: Prof. Ilham Alakbarov
40 years old seedling. The variety "furfuraceus" is distingushable for the dark green-brown-grey equilaterally triangular shaped tubercles with abundant white wool at the apex. The tubercles are also usually more obese, pointed and smooth, with areoles on the tip.

Description: Ariocarpus furfuraceus differs from the standard Ariocarpus retusus only for its equilaterally triangular tubercles, all the other characteristics clearly show that they are conspecific. Ariocarpus retusus is quite variable and has received numerous unnecessary names of no botanical value, representing no more than local phenotypes: Ariocarpus furfuraceus is one of them.
Habit: Solitary, slow-growing geophyte cactus, with tubercles slightly projecting above ground level. The large tuberous body is below the soil.
Stem: Grey-green, flattened, globose, rounded on top, 3-12 cm high, 10-25cm in diameter.
Tubercles: The distinctive characteristic of Ariocarpus furfuaraceus are the tubercles, which are equilaterally triangular shaped, divergent, convex or nearly flattened adaxially and often with shallow adaxial undulations or wrinkling, not fissured, 1,5-4 cm long, 1-3,5 cm wide, nearly as wide as long.
Areoles: At the tips of the tubercles, rounded, 1-5 mm in diameter.
Flowers: Diurnal, 4-5 cm in diameter, 2-4 2cm long, white to clear pink.
Root: Tap root.
Flowering time: Autumn.
Remarks: All of the Ariocarpus seedlings are spiny and quite different from adult specimens, though the spines are feather-like.
Fruit: White, green, or rarely pinkish, 10-25 mm long, 3-10 mm in diameter. 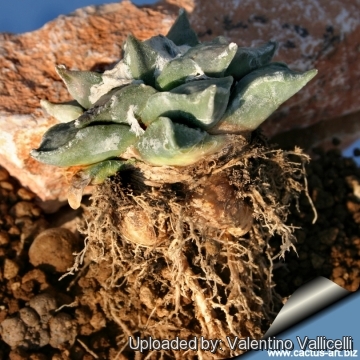 Ariocarpus furfuraceus Photo by: Prof. Ilham Alakbarov
Send a photo of this plant.

Cultivation and Propagation: This species is slow-growing, but certainly not as slow as some other types of cacti. It is of easy cultivation in a well-drained, non-organic, free-draining soil compost, with ample water during the growing season. Use of a weak low-nitrogen fertilizer during the growing season can encourage growth. The main threat to their development is root rot. Ariocarpus should be kept dry whenever there is a threat of cold. The appearance of Ariocarpus can benefit greatly by watering the plants from the bottom. This practice will help to keep the “wool” on the top of the plant from becoming matted or discoloured. It needs light shade to full sun.
Frost Tolerance: Hardy to -10° C
Propagation: It is probably the easiest species of the genus to raise from seed, but will generally take about 6-10 years to reach flowering size, occasionally grafted.