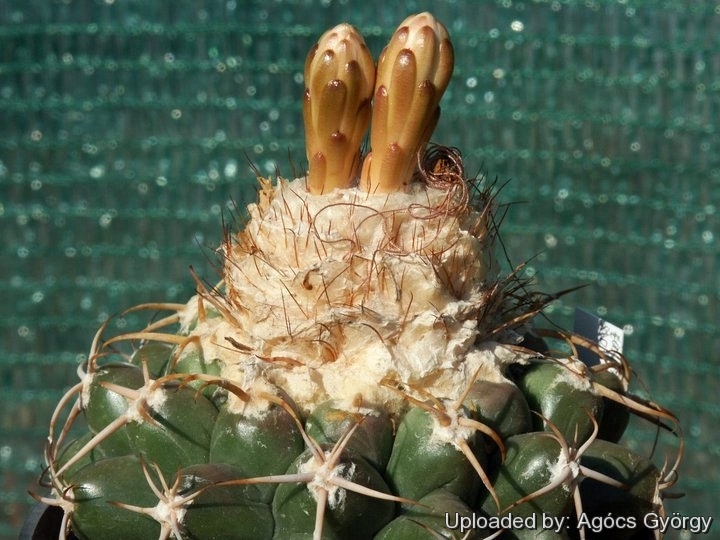 Origin and Habitat: Discocactus ferricola grows Corumbá, near the Bolivian border, Mato Grosso do Sul, Brazil, as well as in in the Cerro Mutum and San Cyrilio in Bolivia (rea of occupancy of no more than 20 km2). The species is locally abundant, but it is only found at three sites.
Altitude range: 100-250 metres above sea level.
Habitat and Ecology: The plants grow on large, flat outcrops of iron and manganese ore surrounded by cerrado vegetation and forest. Generation length is 10 years. The main threat to the species is mining, especially in Bolivia, and settlements on the sites. The flat rocky areas are cleaned from any remaining vegetation for urbanization. The population has suffered a 30% decline over 30 years due to the severe habitat loss. The threats have not ceased, and thus continue causing declines in mature individuals and suitable habitat.

Description: Discocactus ferricola is a small flattish globular cactus from Brazil and Bolivia that flowers on warm summer nights. At first plants are solitary and produces a small creamy-brown cephalium, a structure formed by trichomes (woolly hairs) from which emerge the tubular, white, sweetly scented flowers. Older specimen may eventually produce some offsets after making a cephalium. Discocactus ferricola belongs to the Discocactus heptacanthus- complex. It differs from Discocactus heptacanthus proper by the spiralling tuberculate ribs and the long spreading acicular spines.
Derivation of specific name: ferricola Lat. 'ferrum', iron; and Lat. '-cola', inhabiting; for the occurrence on iron-rich soil.
Stems: Flattened to globose, 5-9 cm high, 20-25 cm in diameter, dark green in the period of growth; in winter the epidermis can have a reddish tinge.
Ribs: 14-15, forming well defined tubercles.
Areoles: Round to ovoid, dirty white. Number of areoles per ribs is 5 to 6 on plants with cephalium.
Central spine: Lacking, sometimes one, up to 2.5 cm long.
Radial spines: 5-8, reddish-brown, becoming grey with age, 1 to 5 cm long more or less curved toward the plants body.
Cephalium: Up to 7 cm tall and 6.5 cm across, with white wool and dark grey bristles to 5 cm long.
Flowers: to 5.5 cm long.
Fruits: Elongate to club shaped, greenish cream to white, 3-4 cm long. 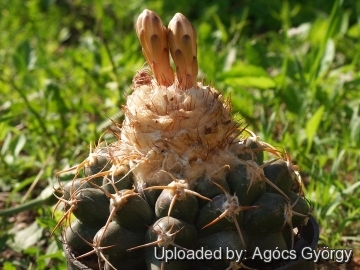 At Rebutialand cactus collection Demjén, Hungary. Photo by: Agócs György
Send a photo of this plant.

Cultivation and Propagation: Collectors consider this cactus genus from South America to be rarities as they are not the easiest plant to keep happy. it is rather difficult to grow and frost tender, should be kept at above 15° C if grown on its own roots (8°C if grafted) need full sun or afternoon shade. Young seedlings are generally grafted because they are slow growing and very rot prone when kept on their own roots and though they can’t endure long stretches of total dryness, too much water will rot them, as their weak root systems tend to be inefficient at sucking up water from wet soil. They generally resent being repotted and can take a long time to establish.
Uses: The stems are used locally for making sweets.
Propagation: Seed. Young seedlings are often grafted on a low stock to keep the plant in a good shape.