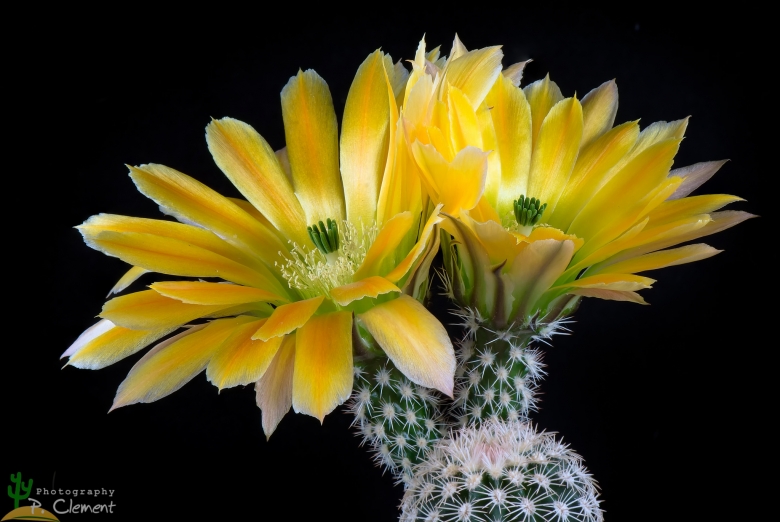 Description: Echinocereus dasyacanthus var. ctenoides is a cylindrical Echinocereus species very closely related to Echinocereus dasyacanthus and may not be specifically distinct. It differs somewhat in its spines and has a more southern range. The stems are banded with pink and grey as in the rainbow cactus (Echinocereus rigidissimus). The flowers are yellow, orange, or a blend of yellow and orange and very large for the size of the plant.
Stem: Simple or clustering to 6 stems, each heavily cylindric, elongated, 10-15(-40) cm long, to 8 (-10) cm in diameter.
Ribs: 15 to 17, low prominently interrupted by tubercles.
Areoles: Crowded together, short-elliptic.
Radial spines: 14-22, not spreading but standing out at an angle to the ribs.
Central spines: 2-4 (sometime as many as to 10), arranged in a single row or sometimes a little irregular, white with very light brown tips, never purplish or banded.
Flowers: Large, showy, mostly, orange-yellow, but also yellow or pink, up to 10 cm long, about as wide as long when fully expanded. Perianth segments linear to narrowly spatulate, ends erose, bright to reddish yellow upper part with bright orange midline, lower third green, center bright green. Filaments yellow. Style white to greenish-white. Stigma lobes 13 dark green. Ovary and fruit very spiny with some short white wool. Spines 14 -16 short, rigid, white with dark brown tips.
Fruits: 12-30 mm in diameter, spherical or egg-shaped, green then greenish-brown when ripe, covered with short wool, rigid spines, deciduous when fruit ripens.
Notes: Echinocereus dasyacanthus var. ctenoides is one of the least known of all Echinocerei, it was described by Engelmann over one hundred years ago. Engelmann had specimens from Bigelow, collected at Eagle Pass and near Santa Rosa, Coahuila, and those of Wright, collected by the lower Pecos River, which is not far front Eagle Pass. He stated that the plant "looked distinct enough from E. dasyacanthus"; and then he stated that "the flowerless plant so closely resemble E. pectinatus that it can hardly be distinguished from it except by the fewer ribs". In spite of its yellow flowers Backeberg finally call the cactus E. dasyacanthus var. ctenoides. In the 80th Del Weniger was unable to found any of these plants along the Rio Grande from below Eagle Pass to the Pecos, but in the mountains northwest of Santa Rosa in the adjacent part of Coahuila he found stands of small, few clustered Echinocerei almost exactly like E. pectinatus, except for their whiter spines, with 15 or 16 ribs, 2 to 4 centrals, and large, light-orange flowers. This plants were identified by Weniger as a form of E. pectinatus. Echinocereus pectinatus
var. wenigeri is considered by Frank (1997) to be a synonym of this species.

Subspecies, varieties, forms and cultivars of plants belonging to the Echinocereus dasyacanthus group 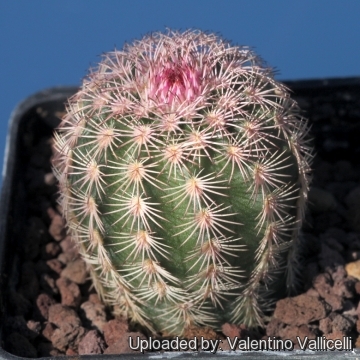 The gallery now contains thousands of pictures, however it is possible to do even more. We are, of course, seeking photos of species not yet shown in the gallery but not only that, we are also looking for better pictures than those already present. Read More...
Cite this page: "Echinocereus dasyacanthus var. ctenoides" Text available under a CC-BY-SA Creative Commons Attribution License. www.llifle.com 14 Nov. 2005. 25 Oct 2020. </Encyclopedia/CACTI/Family/Cactaceae/5537/Echinocereus_dasyacanthus_var._ctenoides>