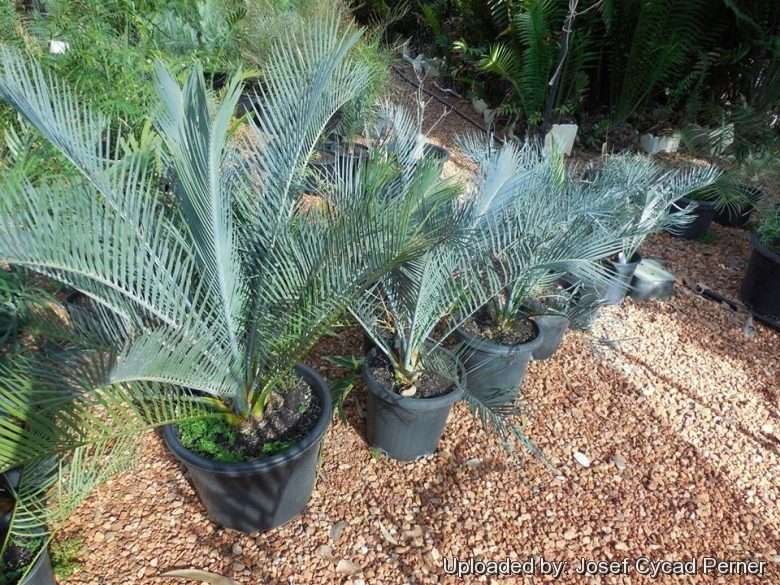 Origin and Habitat: Macrozamia macdonnellii occurs in the central desert interior, Northern Territory, Australia. it is found in scattered isolated populations on the MacDonnell Range and associated range systems (including the Krichauff, George Gill, and Harts ranges) at least 1,400 km in all directions from all other Macrozamia species. It was probably more widespread in the ranges of the past.
Habitat and Ecology: This species survives in a limited niche in a very hostile environment mostly much too arid for its survival. It is found scattered on thin soils on rocky slopes, in Triodia grassland or open woodland. The plants usually occur in bare, shaded gullies or sheltered gorges of ancient river systems and also grow on hills of both metamorphic and sedimentary rock (often on quartzose, sandstone hillsides) where their roots can tap deep into moisture-trapping rock crevices. In the same limited area it is possible to find the endemic tall palms (Livistona mariae) along with a rich xerophytic flora, insects, fish, molluscs, lizards, spiders and various other biota. Numerous insect species have been found on male and female cones of Macrozamia, but only beetles and wind were thought to be pollen vectors. The plant is slow growing and some plant may be up to 300 years old. Macrozamia macdonnellii is relict plants, remnants of earlier geological time scale periods when higher rainfall occurred and is more akin to living fossils. It is a locally abundant and stable species, but here is concern about an apparent decline in the Black-Footed Rock-wallaby, Petrogale lateralis, populations. If Rock-wallabies undergo a decline this may have an adverse effect on seed dispersal. Illegal seed collection and habitat disruption due to fire exposure are potential threats to the survival of this species. Seed production is very irregular, with a short period of viability. Plants are also poached by collectors.

Description: Macrozamia macdonnellii is a tree-like species that makes low dull bluish fountains of palm-like growth. It has seeds weighing up to 50 g (the largest of any cycad). A very spectacular plant.
Stem (trunk): Above-ground, mostly short 0.4-3 m tall and rarely a diameter of 60-80 cm is achieved. The growth of this trunk is very slow, about 1 cm per year. The species is thought to be very long lived and Preece (2005) measured trunk lengths of greater than 4 metres.
Leaves (fronds): 50 to 120 deciduous, bluey green to dull bluish, with rachis recurved downward 1.5 to 2.2 m long, weakly keeled and simply pinnate. Petiole 12 to 25 cm long. Pinnae (leaflets) approx 120-170 per frond, straight very sharp-tipped with smooth margins, the lowest reduced to spines, gradually becoming up to 20-30 cm long 15 to 25 mm wide in the middle.
Male cones: Slender, 25-40 cm long and 8-10 cm in diameter. Micro sporophylls 3-4 cm long and 1.5- 2 cm wide ending with a spine to to 25 mm long.
Seed cones: 40-50 cm long and 20-27 cm in diameter. Megasporophylle 8-12.5 cm long and 4-6 cm wide ending with a 7-10 cm long spine.
Seeds: Ovoid 6-8 cm long and 4-5.3 cm in diameter. Sarcotesta bright orange to orange-brown. 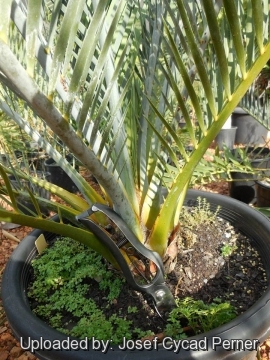 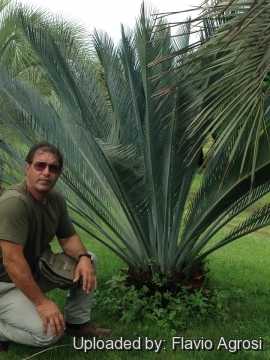 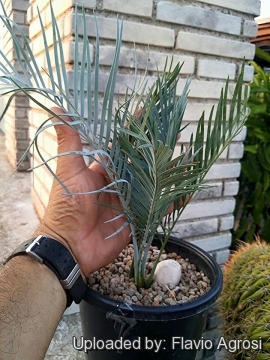 Cultivation and Propagation: Zamia angustifolia is a beautiful Cycad, very drought hardy, for part shade to full sun and is pretty tolerant of abuse, but you have to grow it in full, blazing sun, or you won't get that beautiful, glaucous blue colouration. Shady environments make it look green and uncharacteristic. Zamia angustifoliagrows better in the ground than in a pot.
Growth rate: It is very slow growing, however good conditions can speed it up considerably.
Exposition: It prefers full or bright filtered sun but not in constant deep shade.
Soil: Needs a well drained preferably limestone based soil, but will still thrive in less than ideal conditions. Mulch with organic materials (bark or leaf mould).
Transplantation: This cycad is touchy about being moved. In fact, it's a delicate species in general. Best to plant this one out a bit smaller and be sure that's where you want it.
Moisture: Water when dry. Drought tolerant, but not really that drought tolerant, though.
Fertilization. Because of its growth habit, fertilize only when terminal bud begins to swell, indicating the start of the annual growth cycle.
Hardiness: Due to its Australian origin keep warm in winter, the minimum safe average temperature is 12°C, although it can go lower for short periods. It can be grown outdoors in frost-free climates, need anyway to kept above 2°C and dry in winter. Can't stand any frost.
Maintenance: Minimal, removal of offsets if desired, removal of spent fronds
Use: Landscape as cultivated perennial in warm areas. Several can be planted together for a lush, tropical effect. Plant on three to five-foot-centers to create a mass planting.
Propagation: Seeds. The germination process is slow and difficult. Therefore, it is best to clean the seeds of external fruit and set them aside before attempting to propagate the seeds. Seeds should be sown in shallow container, lightly covered with sand, and after germination, potted off in small pots of moderately rich, light soil. The growing plants do best in partial shade.