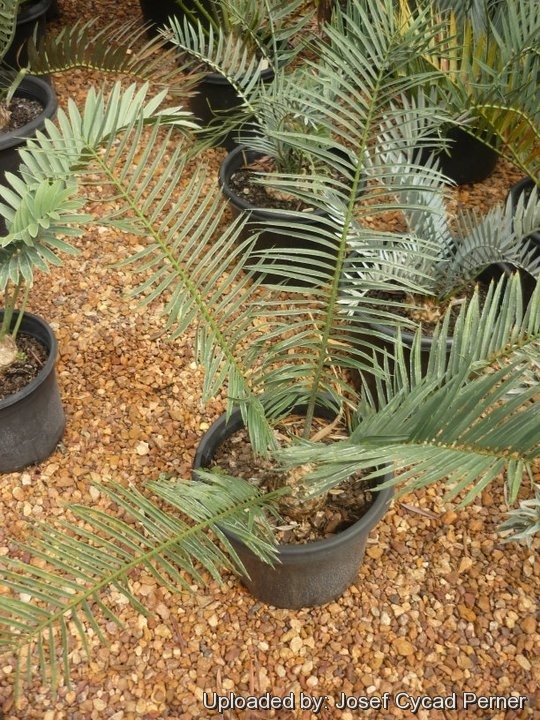 Origin and Habitat: Encephalartos umbeluziensis occurs in a number of localities in Mozambique and Swaziland. The population is restricted in Swaziland along the Umbeluzi River straddling the Swaziland- Mozambique border near the town of Goba (Extent of occurrence and area of occupancy about 336 km²), occurrence at less than 5 locations. The population is thought to number between 1,000 and 1,500 mature individuals.
Altitude range: 50 to 120 metres above sea level.
Habitat and Ecology: This species is found in the shade of low scrub woodland or in relatively dry savanna and bushveld. To the west the plants are found in valleys and further eastwards towards Mozambique they occur on the floodplains of rivers. Rainfall varies from 625 to 750 mm per annum. The plant has been threatened by illegal removal of plants from the wild, even within reserves. Generation length 35 years.

Description: Encephalartos umbeluziensis is a small to medium sized cycad with a subterranean, usually solitary stem with thick tuberous root up to diameter 25 cm in diameter that only branch when injured.
The leaves (fronds) are few in a crown 1 to 2 m long with the rhachis straight, erect or sometimes spreading-recurved in shade. The leaf colour is a glossy bright. Like other cycad species, E. umbeluziensis is dioecious, meaning that there are separate male and female plants, and the female produces seeds while the male produces pollen. But this species has proved to be able, as a result of injures or exposure to very low temperatures, to achieve a spontaneous change of sex. It was described in 1951 by South African botanists R. Allen Dyer.
Derivation of specific name: The specific epithet umbeluziensis refers to the place of origin, the river Mbeluzi Swaziland, with the Latin termination ensis, place of origin.
Stem: Subterranean or sometimes with crown slightly exposed, usually unbranched with thick tuberous root, up to about 30 cm long and 20-25 cm across, with densely woolly interseriate bracts.
Leaves: 1-2 m long, suberect in open situations and only recurving in shade, flat (not keeled) in section (opposing leaflets inserted at 180° on rachis),woolly at first except on upper surface of leaflets, hairs falling with age. Petiole 10-30 cm long, suberect, woolly at first them glabrescent with no prickles. Rachis green, straight, stiff, not spirally twisted. Leaflets, light green becoming dark green, highly glossy and weakly discolorous when mature, reduced in size towards base but not to more than 1 or 2 prickles, leaf-base collar not present. Median leaflets lanceolate, 10-20 cm long, rarely up to 30 cm, 8-15 mm broad tapering gradually to the pungent apex not overlapping, not lobed, insertion angle horizontal, and margins usually with with 1-2 prickles on upper margin and 1-3 on lower margin.
Male cones: 1-3(-4) together, peduncu­late, narrowly ovoid to almost cylindric, tapering slightly to apex, up to about 30 cm long, 6-8 cm across green or olive-green turning to sulphur-yellow, glabrous . Peduncles 10-12 cm long.
Female cones: 1-3(-4) together, peduncu­late, olive-green turning to sulphur-yellow, glabrous 25-30 cm long, 12-15 cm across. Peduncles about 15 cm long and 3.5 cm across.
Seed: Oblong 3-3,5 cm long, about 2 cm thick, angled by compression, sarcotesta orange to scarlet.
Similar species: This species much resembles Encephalartos villosus in both vegetative and cone morphology, but can be distinguished from the latter in that leaves of E. umbeluziensis have a 20-25 cm bare petiole while those of Encephalartos villosus have the characteristic steadily reducing leaflets terminating in prickles at the leafbase and the cones, especially the male ones are considerably smaller on the average. E. umbeluziensis is also related to Encephalartos ngoyanus and Encephalartos cerinus from which it is distingued by dark green leaves with a longer petiole and 1-2, well-spaced teeth in lower leaflets margins and by the lack of wool the crown. Young plants of E. umbeluziensis and E. ngoyanus are not readily distinguished but so far no overlap in distribution. Mature plants of the former are considerably more robust especially in the round petioles and larger cones.

Notes: The African Encephalartos are remnants from the Mesozoic (from about 252 to 66 million years ago) when these relatively primitive plants, together with the dinosaurs, were among the dominant life forms.

Cultivation and Propagation: As a garden subject, Encephalartos umbeluziensis is medium-sized cycad that despite the harsh environment it in which it lives does seem to like regular water and a little fertiliser. This cycad is easy to grow but hard-to-find, as it does not occur in large numbers in any of its localities, but rather in small, isolated colonies. It is very adaptable in cultivation, provided it has a well-drained soil, frost-free conditions and regular watering during the dry months. It is an adaptable plant well suited to subtropical climates. It can be grown in full sun without its leaves burning. When young they can be grown as a container plant and eventually transplanted into the garden.
Growing rate: Seedlings planted out in raised beds and carefully mulched - so the soil could never dry out - grow much faster than the seedlings kept in pots.
Soils: It grows in all sorts of soil type, but prefer well drained, gritty soil with plenty of water, especially in dry weather.
Transplanting: This species transplants easily as a mature plant, although it is recommended to remove all of the leaves before doing so. This makes for easier handling and the plant will recover sooner due to less moisture loss.
Exposure: It thrives and grows best in partial shade. When grown in full sun, the leaves are a little shorter and less likely to be damaged by wind. The leaves of those plants grown in the shade can become stretched out and damage the caudex if they break off close to their base.
Waterings: In cultivation prefers moist soil with good drainage for optimal growth. But it is eventually drought resistant. Irrigation systems can be detrimental to cycads, damaging the leaves and stems from the pressure of the water as well as over-watering.
Fertilization: Naturally undemanding for nutrients, it responds very well to regular applications of fertilizer. Growth can be greatly improved through the application of fertilizers. Most growers find that a fertilizer having an even NPK (Nitrogen, Phosphorus, Potassium) balance, and supplemental trace elements, provides a good start for cycads.
Wind tolerance: It prefers a sheltered position providing protection from the prevailing winds.
Hardiness: Frost sensitive (USDA zones 10-12). It is represented in botanical gardens and private collections worldwide where the tropical cycads can be grown. However it exhibits an unusual amount of cold tolerance by surviving in temperate areas as well.
Propagation: It may be propagated by seeds. They are among the easiest plants to germinate, but appears to need shade for successful germination.