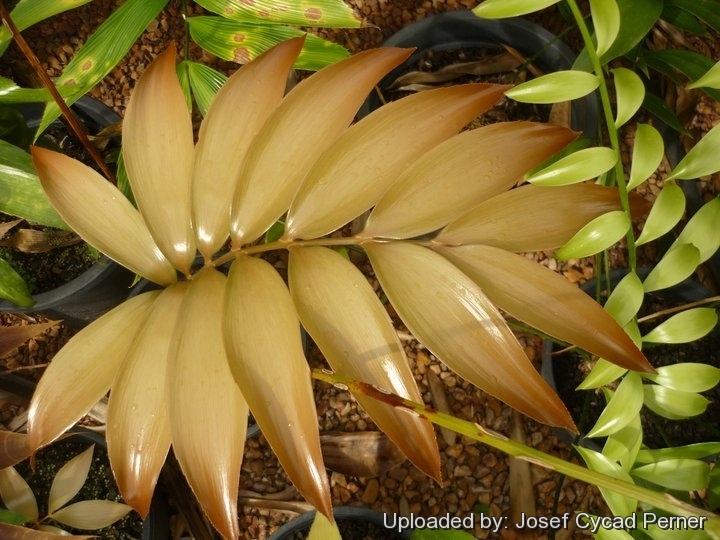 Origin and Habitat: Zamia splendens is endemic to Eastern Chiapas, Mexico. It has also been reported from the state of Tabasco, but that plant has somewhat different, although similar; leaves, and cones with very short peduncles. It ranges over a large area where it is still reasonably common.
Altitude range: about 600 to 1500 metres above sea level.
Habitat and ecology: This species generally occurs as an understory plant in wet tropical rain forest. Rainfall averages about 2000 mm per annum, falling mainly in summer; however; the habitat always seems to be very humid even during the dry season. The red colouration of the seed aids in the dispersal of the seeds by birds or animals. The habitat of this Zamia is located in areas that are well suited for coffee production and much of the area has been cleared for the planting of coffee. The slash and burn agriculture in Mexico continues unabated and because of this the habitat of many plants, including Zamia splendens, is threatened. However it would seem that the conservation status of Zamia splendens is relatively secure. Zamia splendens is sympatric with Ceratozamia robusta and also Zamia lodegesii.  A hybrid swarm exists between Zamia splendens and Zamia lodegesii.

Description: Zamia splendens is a small cycad with "splendent" (extremely glossy) leaves (hence the name!) It produces a subterranean caudex up to 25 cm long and 5 cm in diameter from which new fronds (laeves) are produced every year. The new emerging fronds are upright and slightly arching and range in amazing shades of brigh-pink, orange, and/or red and become glossy dark green as they age. The leaflet width varies from about 4.5 cm to almost 10 cm. As the leaves mature and harden off they slowly lose the reddish-brown colouration, however, this process may take several months. In cultivation vigorous plants can have fronds which measure up to 110 cm long including long armed petioles. Seedling leaves are also similarly coloured and plants generally produce up to five leaves every year, however; two leaves are more than sufficient to exhibit its beauty. rounded. Zamias are dioecious, meaning that there are separate male and female plants, and the female produces seeds while the male produces pollen. The female cones usually are born singly while male plants can throw up to 7 cones all at one time. The latter are thinner and much smaller in size than the female cones, and the sex ratio is 1.7:1 (male:female). The female cone has a prominent apicula and is decumbent after being receptive. It was officially described in 1984 by Dr. Bart Schutzman.
Similar species: Zamia splendens is very similar to Zamia lacandona, except this plant has fewer leaflets, which are broader and more. Otherwise, Zamia splendens is most similar to Zamia purpurea with glossy leaves and vibrant coloured new leaves.
Stem (caudex): Small, tuberous, subterranean rarely branched except through injury, up to 25 cm long and 5 cm in diameter.
Leaves (fronds): In habitat this Zamia rarely holds more than two leaves at a time, but in cultivation a plant can produce many apices and many leaves per apex, forming a very impressive mass of stems and leaves. Individual plants typically flush only once per year, with a peak of vegetative activity in late spring. The new leaves are upright and slightly arching, glossy dark green, 30-100 cm long, 18-70 cm wide, and flat to slightly keeled. The leaflets slowly harden off and turn a glossy green. Petiole is robust, 32-37 cm long more or less armed with spines, often extending onto the rachis. Leaflets in four to 10 pairs, very stiff and leathery, opposite to sub-opposite, glossy dark green above, dull below, flat, long elliptical (rarely falcate, and seldom narrow), the vein is visible but not elevated. Median leaflets 27-30 cm long and 3-6.5(often more in cultivation) cm wide, the margins slightly revolute and serrulate in the upper part of the leaflet. Emergent leaves generally bright red-dish-brown, however; some individuals with green emergent leaves are known to occur.
Female cones Solitary or some plants rarely producing two or more (up to 8), almost round to cylindrical, 7-13 cm long and 4.5-6 cm in diameter. At first clothed with a thick brown tomentum which eventually weathers away, leaving the cone dark green and somewhat glossy. Peduncle 10-15 cm long and pendent, the cone tending to bend upright. The sporophylls can be rounded and smooth or show definite facets.
Male cones: 2 to 7(-15) per crown, conical and much smaller than the female cones, 4-9 cm long and 1.7-2 cm in diameter. The male cones are also densely brown tomentose but unlike the females, the tomentum does not weather away. Peduncles 8-16 cm long are also long and pendant.
Phenology: Male cones emerge primarily in winter, and pollen is released four to five months later in spring. Female plants typically begin coning in late winter, and the female cones take 10-12 months to mature.
Seeds: The sarcotesta is bright glossy orange when ripe.
Taxonomy notes: Taxonomically Zamia splendens is a controversial name considered by some authors a synonym of Zamia verschaffeltii Miq. It is also known as Zamia katzeriana. 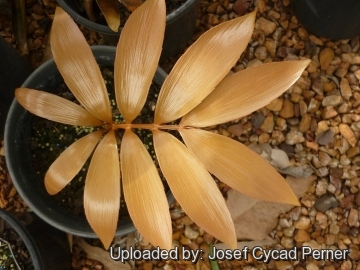 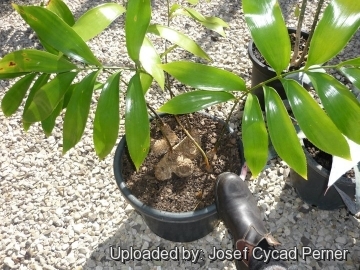 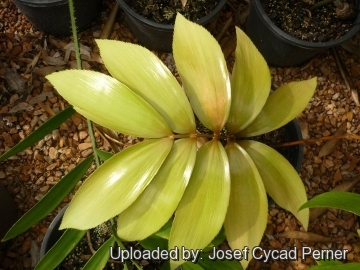 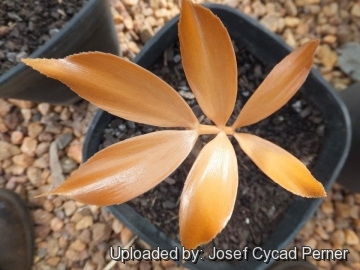 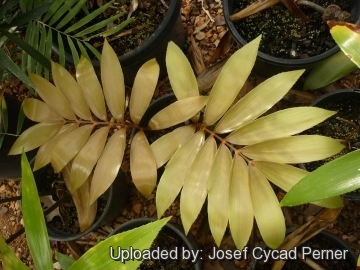 Zamia splendens Photo by: Josef Cycad Perner
Send a photo of this plant.

Cultivation and Propagation: "Zamia splendens" is a small can be used as a small shrub that does not take up much space in the garden. It is one of the most attractive zamias, having shiny green leaves, that are typically reddish-pink emergent. It typically holds only one or two leaves. Occasionally some plants may produce side shoots and plants then hold many more leaves and are much more impressive. It is easy to grow so it worth a place in every cycads collection for its beauty. This is a very adaptable and robust grower, handling low light situations, some coastal sun, all sorts of soils and watering schemes and even does well as an indoor plant. In containers, they usually lose their leaves in the winter, but in the ground this usually does not occur. Plants may survive winter low temperatures (even light frost) and periodic flooding.
Exposition: It can be grown in shade or full sun, but looks best when grown in some shade, best with some protection from afternoon heat but not in constant deep shade.
Soil: Needs a neutral, well drained sandy soil spot, with deep soil, but will still thrive in less than ideal conditions. Mulch with organic materials (bark or leaf mould).
Moisture: Water when dry. Drought tolerant.
Fertilization. Because of its growth habit, fertilize only when terminal bud begins to swell, indicating the start of the annual growth cycle.
Hardiness: It should be protected from extreme cold. (USDA Zones 9-11) Sustains leaf damage at -2° C.
Maintenance: Minimal; removal of offsets if desired, removal of spent fronds. It is also advised to defoliate plants in the early spring as this causes them to make a new full head of leaves. When you don’t defoliate them, they tend to get too many leaves and new leaves have a difficult time getting through the old leaves.
Use: Landscape as cultivated perennial in warm areas, it makes a great accent or specimen plant. Several can be planted together for a lush, tropical effect. Plant on three to five-foot-centers to create a mass planting. Use near the patio, in mixed foundation plantings or in perennial beds. It is a spectacular house-plant or interior-scape specimen in cool areas tough enough to survive occasional neglect and harsh indoor environments.
Note: Z. splendens readily crosses with Zamis variegata. If so, the foliage will have the characteristic speckling of Z. variegata.
Warning: All parts of the plant are poisonous to animals and humans. The toxicity causes liver and kidney failure, as well as eventual paralysis. Dehydration sets in very quickly. No treatment for the poisoning is currently known. Poisonous Parts: Fleshy seeds, leaves. Protect pets and instruct children to never eat or chew any plant material without permission.
Propagation: They are easy to propagate from seed. The germination process is slow, after fertile seeds are collected, they usually need several months of storage before the inner embryo is ready to germinate. Therefore, it is best to clean the seeds of external fruit and set them aside before attempting to propagate the seeds. Seeds should be sown in shallow container, lightly covered with sand, and after germination, potted off in small pots of moderately rich, light soil. The growing plants do best in partial shade. The old plants frequently send up suckers around the base of the trunk. These may be taken off when in a dormant state and rooted, care being taken to remove the leaves to guard against excessive transpiration. The advantage of the "pups" is that you will know its sex, for seedlings you will have to wait several years until the plant flowers to find out.