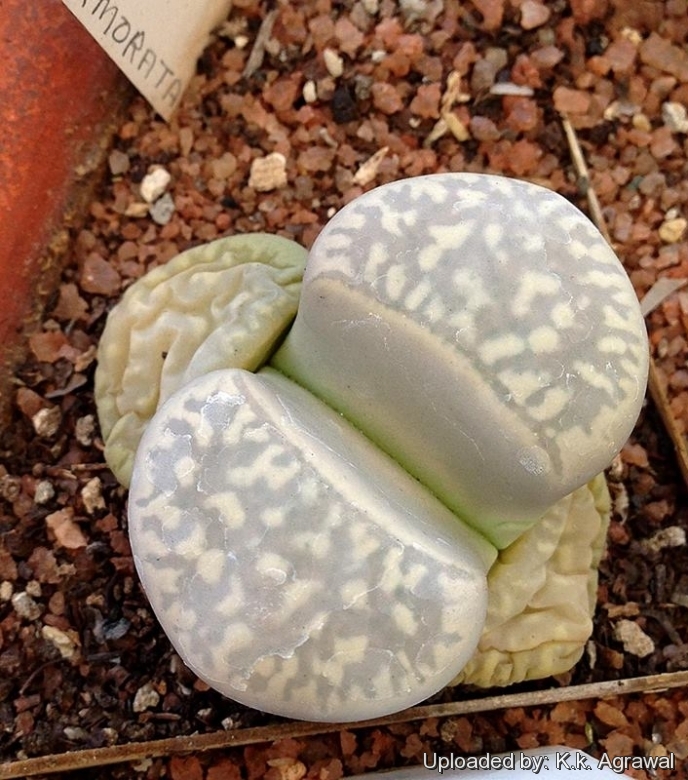 Origin and Habitat: South Africa (Cape Province, Little Namaqualand) in a square area between Steinkopf, Port Nolloth, Pofadder, and Vioolsdrif.
Habitat: Lithops marmorata grows grows sunken in rocky environments and has white to pale grey leaves and closely mimics the white quartzite pebbles on which they grow and are lost to sight in this environment. When they are found, it is usually due to their large and brightly coloured flowers. Stone: Quartzite; gneiss; pegmatite and gneiss; pegmatite and calcrete; pegmatite and schist. Colours grey-white, light brown, pink, brown, red-brown, some greyish green. It grows in areas which receive either more rain or expect a different rainy season. The higher the rainfall and the further the season lies in summer.

Description: Lithops marmorata is a tiny perennials succulent plant close related to Lithops salicola and Lithops umdausensis. The colour is grey-white or pale grey-green sometimes with a purplish flush. The upper surfaces of leaves is convex and quite variable in appearance, it has darker translucent windows mottled with white with an overall marbled effect. Bears a white flower in late summer or early autumn.
Habit: Lithops marmorata consists of a pair of almost stemless succulent leaves that grows solitary or forming clumps of 2 or more heads (occasionally up to 26).
Bodies (paired leaves): Small to medium sized, inverse-cone-shaped, truncate-cordate, 20-36 mm long, 15-23 mm broad, 20-30 mm tall. Lobes unequal-sized, swollen, separated by a deep fissure to 10 mm deep, usually somewhat divergent. The new leaves are opposed with respect to the previous ones and form a right angle with these. Top of lobe ovoidal and more or less elonged, flush to slightly convex, smooth to slightly rugose. Sides coloured light green-yellow, with upper edge slightly purple. Window large grey-green, mottled with palegrey or creamy-green. Outer margin usually distinct, very irregular, consisting of a number of jagged fine projections into the window, others being short toothlike: these projections become separated from the margin and form islands (irregular) in the window; inner margins straight or toothed. The texture of the mottled part of the lobe is very fine, giving the whole window a fine misty appearance like fine cobweb, number of fine white dots in the window.
Flowers: Single glossy white daisy-like that emerges from the fissure, the flower is as large as the pair of fleshy leaves below (2,5-4,5 cm in diameter).
Blooming season: From mid-summer through autumn.
Fruits: Capsules usually 6-parted, Profile boat-shaped, with broad flattened pedicel, top flat. Face broadly elliptic to almost round.
Seeds: Light yellow-brown to yellow-brown; rugose -tuberculate.

Subspecies, varieties, forms and cultivars of plants belonging to the Lithops marmorata group 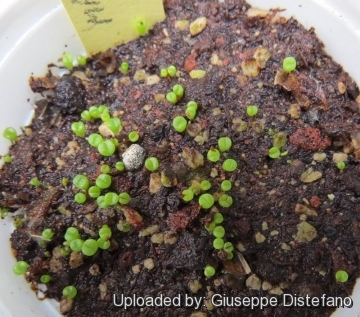 Lithops marmorata Photo by: Valentino Vallicelli
Send a photo of this plant.