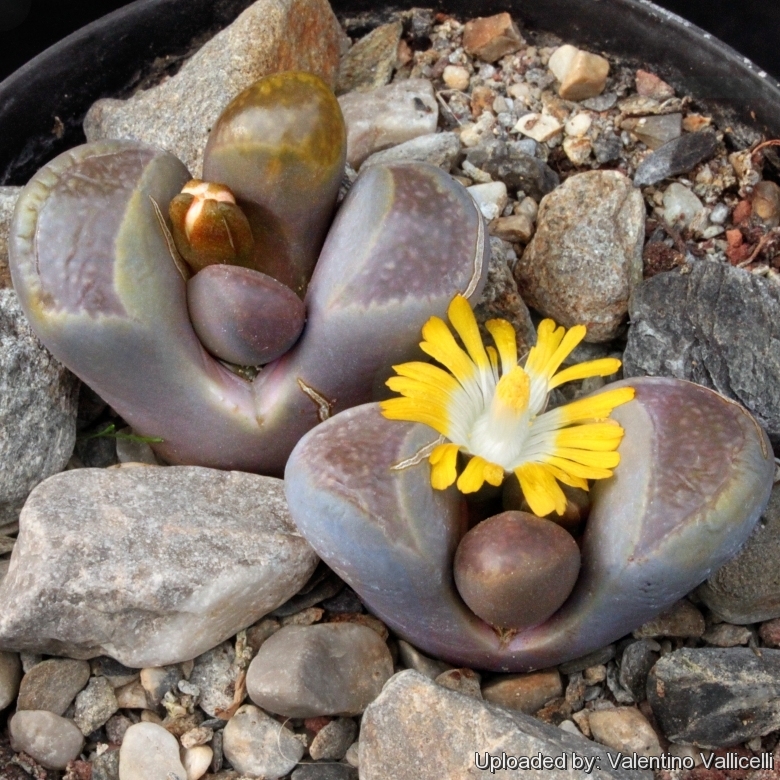 Origin and Habitat: 50 km East-North-East of Ceres, South Africa.
Habitat: This species is very difficult to find in the field, especially when slightly covered with a fine somewhat reddish sand of the one locality. The colour of the sand approximates that of the upper surface of the lobes, and these are practically level with the soil. Thanks to this camouflage Lithops comptonii resist attacks from herbivorous predators, and is almost impossible to distinguish from their surroundings until they erupt into vivid daisy-like yellow flowers. Substratum chert, ferruginous chert and calcrete. Background colours yellow-brown, dark brown and grey.

Description: Lithops comptonii is a stone-like species with top of leaves strongly convex, characterized by large, green, grey brown, plum coloured or purplish windows which contains few pale island. Typically in Lithops the two leaves are separated by a very narrow fissure, but in L. comptonii the lobes, at least in the old stage, stand firmly apart from one another. Divergent lobes are also found in Lithops divergens and Lithops helmuti.
Habit: It is grows usually solitary, sometimes 2 or 4 or up to 15 in a clump and conforms to the typical Lithops morphology: two thick, fleshy windowed leaves separated by a crack from which a yellow flower appears. The windowed part allows light into the inner portion of the leaf where the process of photosynthesis is carried out.
Bodies (paired leaves): Turbinate, truncate-cordate in profile, 20-35 mm 15-23 mm height. Lobes, of unequal size or convex, elliptic-reniform from stand-up viewing and, especially in the young stage, obliquely convex, smooth to slightly rugose. Fissure fairly deep. Window large, partially occluded to somewhat open, dark-green, purple-green or purplish red, or window broken up into a large number of confluent windows by small irregular-shaped islands sometimes giving the window a fine rugulose appearance and; these islands opaque pinkish beige, light grey or pale greenish-grey with some white dots. Channels broad to narrow, obscurely translucent slate grey, dark greenish grey or violet grey. Rubrication absent. Outer margin, greyish-green, distinct with numerous irregularly-shaped laciniae or teeth.Inner margin minutely lobed. Margin.
Flowers: Daisy-like, diurnal, small about 2-3 cm in diameter, yellow with a white throat.
Fruit: Capsule mostly 5-chambered , profile shallow, boat-shaped, top flat, faces broadly elliptic to round.
Seeds: Yellow-brown, tuberculate.

Subspecies, varieties, forms and cultivars of plants belonging to the Lithops comtonii group 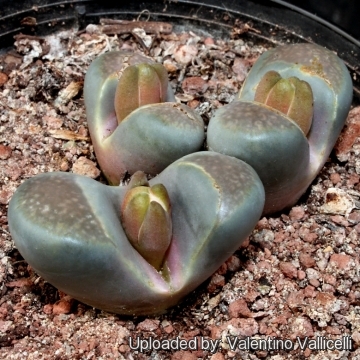 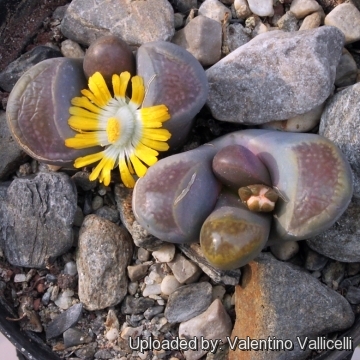 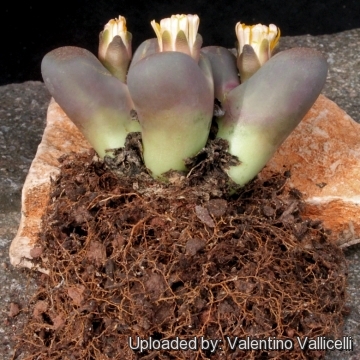