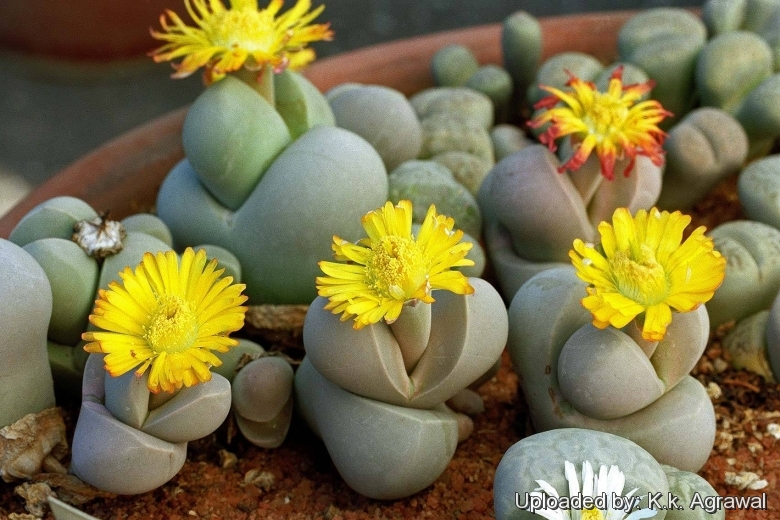 Description: Dinteranthus inexpectatus is a spheroid mesembs mostly forming a single leaf-pair only or rarely forming small groups.
Leaves: Rounded, egg-like, 2,5-4,5 cm high amd up to 5 cm in diameter, smooth, hairless, uniformly milky-white or grey, sometimes tinged with pink, undotted, broadest in their middle, higher than their widest extension. Leaves semi-ovate, united for more than half their length, gaping sometimes a little and which close up to form a sphere in the dry period. Keels, 1 or 2, inconspicuous most pronounced at the fissure, on the back towards the apex, keel epidermis with dome-shaped cells, their tops often knobby, in the centre a thicker cuticular knob.
Flowers: 1,5-4,5 cm broad, deep yellow. Sepals 8. Petals all golden yellow often with a reddish tinge. Stigmas 6-8.
Fruits. Fr valve wings only moderately broader than the expanding keels, not touching each other in the open capsule at their basal ends, (7-)8 locules.
Remarks: The taxon is easily recognized and well separated from Dinteranthus wilmotianus.

Notes: The strange appearance of Dinteranthus have made them very popular in succulent collections. They are similar in habit to Lithops but grows above ground (only Dintheranthus vanzily is partly subterranean like Lithops with the top of each leaf tip exposed above soil). They are also called mimicry plants as they show a striking similarity to their background rocks and are difficult to detect when not in flower. The Dinteranthus have a pebbly look and are commonly known as pebble plants or living stones; each species is associated with one particular type of rock formation and occurs nowhere else. This camouflage also reduces the need for chemical defences against herbivores. 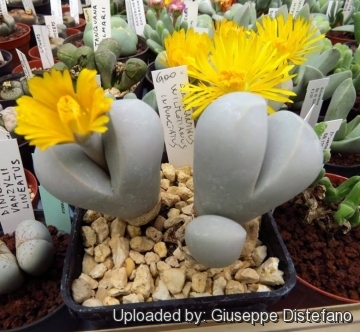 Dinteranthus inexpectatus Photo by: Giuseppe Distefano
Send a photo of this plant.