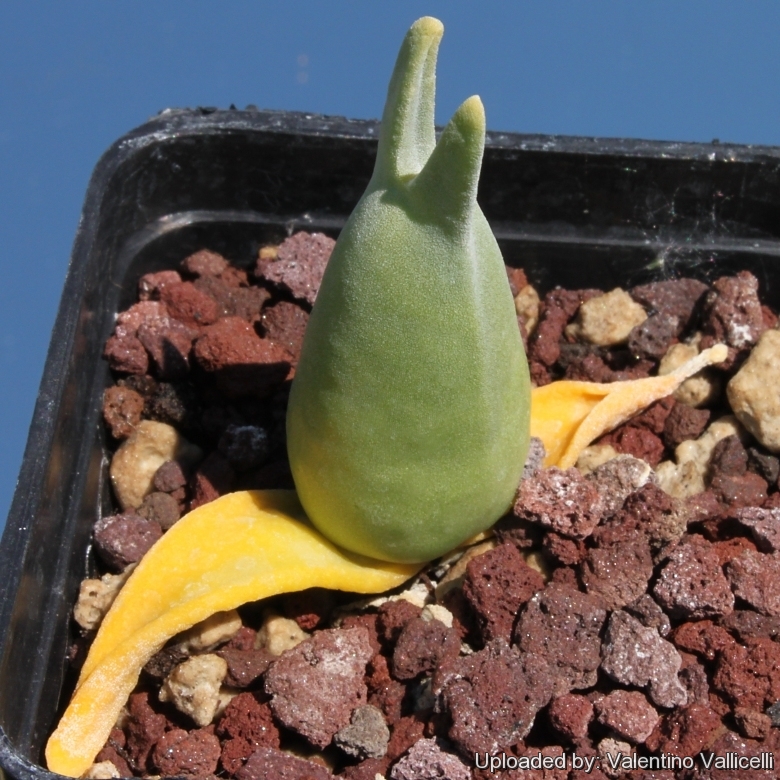 Origin and Habitat: South Africa, Northern Cape Province (Little Namaqualand)
Habitat: Mitrophyllum grande is found in a very arid but winter foggy environment with less than 100 mm of rain per annum, and the plants derive most of their water requirements via frequent mists. The plants grows semi-shaded among rocks, often the branches are exposed to sun while the trunk and the extensive roots are protected by a tangle of other shrubs or rocks. Associated species include Conophytum meyeri, Conophytum obscurum, and Tylecodon buchholzianus. The population trend is stable.

Description: Mitrophyllum grande is a sparingly branched low succulent shrubs with visible nodes. The branches are characteristically covered by dry leaf-remains. The mitres (paired leaves) are more than 4.5 cm tall, sometimes reaching a height of 20 cm.
Stem: Short, unbranched vertical.
Body (paired leaves): 4,5-20 cm long, 1,5-5 cm in diameter. This plant produces two very different leaf-pairs types per season: the "active season pair", only basally connate and free for most of its length, with the upper surface more or less flat, and the "resting season pair", mitre-like (inverted cone shaped), connate for most of its length with only the tips free, this two types of leaves alternate. The resting pair (or connate pair) turns into a papery, parchment-like skin or sheath protecting the free one during the the summer inactive period and appears completely dry.
Flowers: Solitary, terminal, 4-4,5 cm in diameter white, petals in 3-4 whorls, stamens at first collected into a cone spreading later, anthers golden yellow, sepals 5. The flowers are subtended by leaf-like bracts that give the plant the appearance of having 3 types of leaves. Internodes below the bracts 3 or more mm long.
Fruit: Pentangular capuseles with covering membranes extending about 1/3 over the locules. Stalk of fruits erect and straight.
Blooming season: In their habitat they flowers toward the end of the rainy season, from mid-fall to mid-winter. 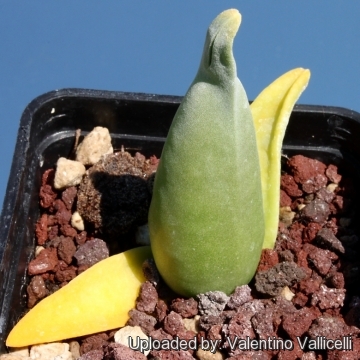 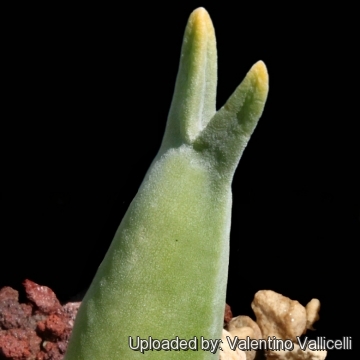 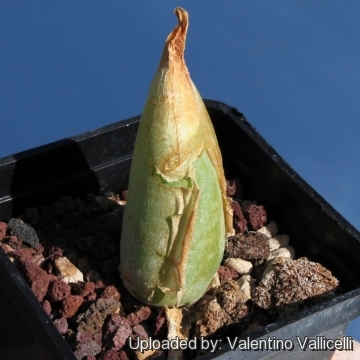 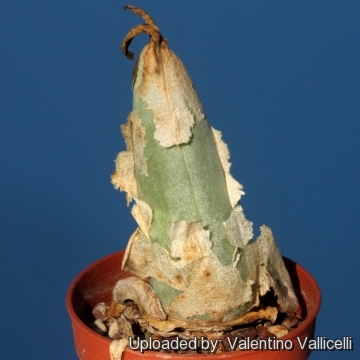 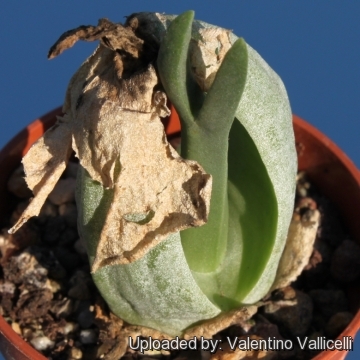 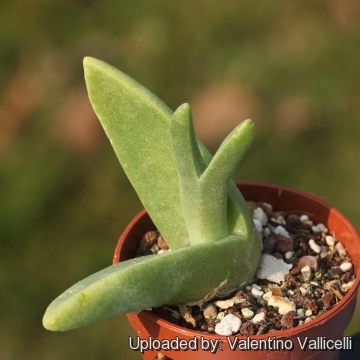 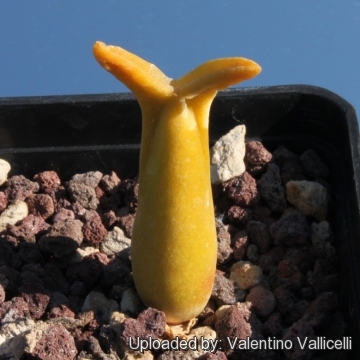 Cultivation and Propagation: They are relatively difficult to grow and take many years to mature. In cultivation the plants tend to be fall and winter active and head for summer dormancy. The growing season in northern hemisphere is from September to March, but the active growth is concentrated in a short period in early autumn.
Soil: They prefer sandy, mineral-rich soil and require a very good drainage and protection from excessive water.
Fertilizer: Be careful not to apply too much fertilizer.
Water: Water minimally in summer. Water regularly in winter after the new long green leaves appears at their extremities in autumn after the summer resting period, or alternatively (as for other difficult species) do not to water the plants themselves, but sink the pots in gravel which is kept moist.
Exposure: They enjoy some shade (avoid direct summer sun as they grow wild among rocks and under the shade of other plants) and in summer they need to be kept in a cool area.
Hardiness: Hardy to -2°C (or less).
Maintenance: Avoid to repot frequently. This plant may stay in the same pot for many years. Plants grown in larger containers have frequently relatively poor flowers. It might improve when the plants are given their own, small individual pots. Ensure a very good ventilation.
Propagation: They can be reproduced by seed and with much less ease from cuttings. Take the cutting from a grown-up mother plant. Each cutting must contain one or more branches along with a fraction of root.