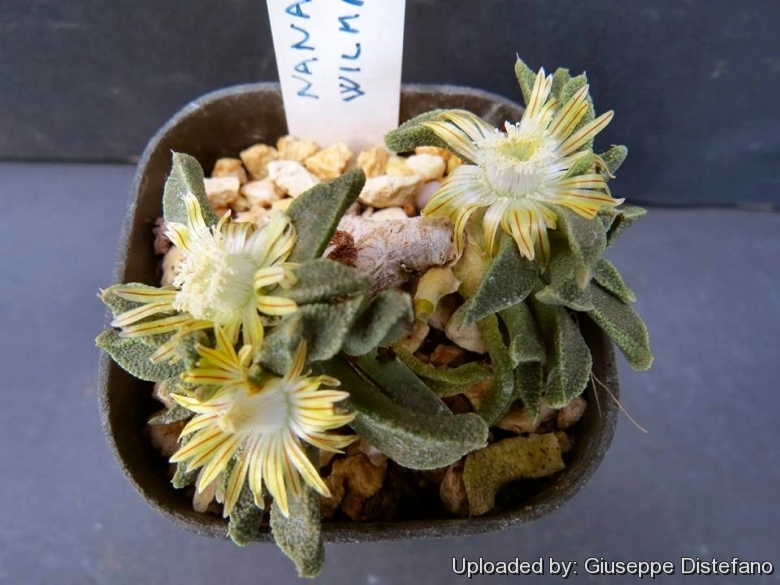 Origin and Habitat: South-eastern corner of Botswana; East part of Northern Cape, South Africa.
Habitat: It grows mostly at the edge of pans in finely decomposed limestone, the plants often sunken into the ground, or among stones. In arid environments with rainfall ranging from a maximum of 500 mm per annum to less than 300 mm per annum, mainly in summer, plants then often flooded.

Description: Nananthus wilmaniae is a local or morphological form of Nananthus aloides. It is quite similar to the latter (of not identical) and not easily separable by any character from the standard aloides.
Habit: It is a very low, succulent, belonging to the Aizoaceae, and has a stout, tuberous root-stock with closely-set dark green, pointed leaves with white warts. It grows in a tuft like a little aloe, eventually closing in to form a mat covered with small daisy-like yellow flowers.
Distinctive characteristics: Nananthus wilmaniae/aloides can be recognized by its flat-lying, broad triangular leaves with ledges along the groove, a feature regularly absent in the other species.
Roots: Tuberous. The tuberous roots (often improperly considered a caudex) are very decorative and in many plants in cultivation are often raised above the soil. In seed raised plants, the “caudex” tend to be much larger and solitary (or few branched) while in plants which have been raised from cuttings, the tuberose roots tend to be thinner, and are more branched, eventually producing tangled masses of many fat roots.
Branches: Several, short, rounded, erect or sprawling each with, typically 6 leaves together.
Leaves: Small, succulent, broadly triangular more or less elongate, narrow-pointed, 2,5-5 cm long forming a visible triangle of almost equal sides of about 10 mm width in section, keeled, a rich, dark green set with many minute warty dots, spreading widely so that only the upper leaf surfaces are visible. The central longitudinal groove is bordered by two lateral ledges in the upper parts of the leaf, 5-7 mm tall.
Flowers: Diurnal, daisy-like, about 2,5 cm in diameter, petals yellow or straw-yellow with or without a central red stripe, even in one population.
Fruits: Capsules 8,5 mm in diameter, 6,7 mm tall.
Seeds: 1,5 mm long, 1,2 mm broad.
Similar species: In cultivation, with darker and wetter conditions, this species often develops more narrow leaves, and is easily confused, mainly with the more slender-leaved Nananthus vittatus which grows in the area south and east of that of N. aloides/wilmaniae.

Subspecies, varieties, forms and cultivars of plants belonging to the Nananthus aloides group 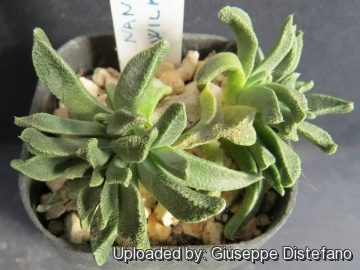 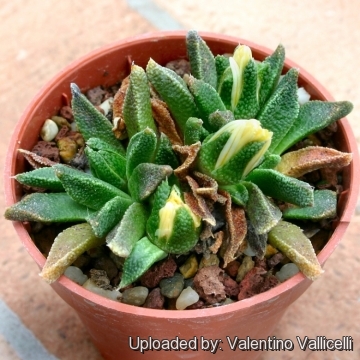 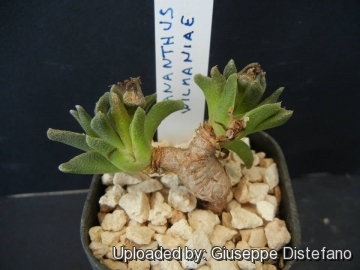 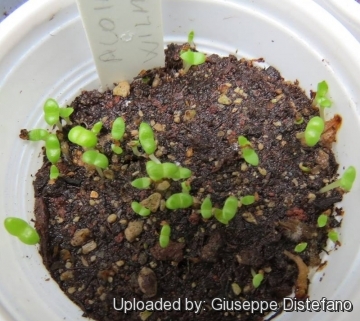 Cultivation and Propagation: Nananthus are easy and rewarding plants. They grow on winter rain areas and were heading for summer dormancy. Suggestions have been made to keep them cool, shaded and dry in summer. This species usually "wakes up" in mid-Fall. Water minimally in summer, only when the plant starts shrivelling. (but it is indeed a very adaptable species that can grow opportunistically in summer too if the water availability and growing condition are favourable). They need full sun or light shade on the other seasons.
Soil: Because of the tap root they need a highly gritty compost with much drainage.
Frost Tolerance: Nananthus will take a small amount of frost for a short time (it is reported to be hardy to at least -12° C). Keep cool in summer.
Comment: It has a gorgeous, thick root system and when it is potted up, the plant can be progressively raised over the ground so that some of the roots can be seen and is especially cultivated for their looks. Architecturally it is a real stunner. When the "caudex" shape of the raised roots is adequately in evidence this plant is incomparable. They also tend to grow more "heads" when they are raised.
Propagation: Cuttings or (rarely) seeds