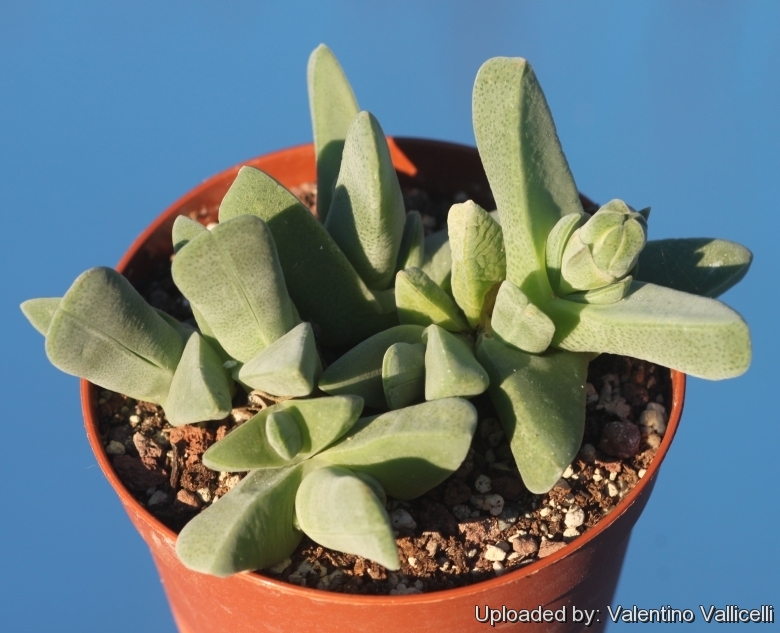 Origin and Habitat: Found in the northern parts of Namaqualand (Richtersveld to Kamieskroon), Namibia.
Habitat: It is found in the Succulent Karoo mostly on quartz flats, hills and stony ground, but also in granite.

Description: Cheiridopsis robusta is a low, clump-forming succulent plant and develops as mats. The plants name robusta pertains to its growth, robust. It is a widespread, extremely variable species that has received numerous unnecessary names.
stems: Very short, internodes not visible with only 2 or 4 leaves.
Leaves: Emerging from papery sleeves, up to 55 mm long and 17 mm wide, succulent, paired, connate only at the base and mostly free, tapering and vertically compressed. Lower surface keeled, upper surface flat, grey-green in colour. Apparently these plants are evergreen, as they always have their leaves. They renew their leaves annually, however, and also when rains fail to come, and the new pair of leaves is always formed at the cost of the water and biomass reserves in the old pair. Consequently, the new plant is smaller than the old one until it can take up sufficient water from the environment again and fully expand. The water content in the leaves of Cheiridopsis robusta continuously decreases during a period of drought.
Flowers: Diurnal, 60 mm in diameter, usually bright yellow, but also cream to salmon whit a paler centre.
Blooming season: Buds appear from winter to early spring (in its habitat June to September)

Subspecies, varieties, forms and cultivars of plants belonging to the Cheiridopsis robusta group 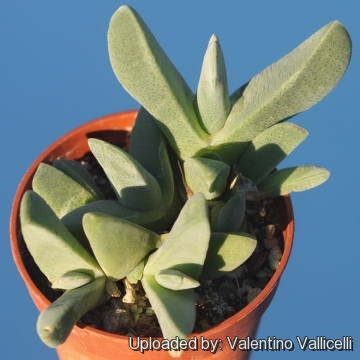 Cheiridopsis robusta Photo by: Valentino Vallicelli
Send a photo of this plant.

Cultivation and Propagation: The Cheiridopsis robusta is a "winter" grower which is most active from late winter until later spring and heading for summer dormancy, but in favourable growing conditions it keeps going over the summer too and doesn't need particular care.
Soil: Requires good drainage as it it is prone to root rot. It can grows outdoor in sunny, dry, rock crevices (protection against winter wet is required) It can also be cultivated in alpine house, in poor, drained soil.
Fertilization: It thrives in poor soils and seems sensitive to an excess of potassium.
Watering: Water minimally in summer, only when the plant starts shrivelling, water more abundantly when they are growing in the autumn and spring. Requires little water otherwise its epidermis breaks (resulting in unsightly scars).
Light: It needs a bright sunny or light shade exposure in winter, but keep cool and shaded in summer.
Hardiness: It prefer a very bright situation and will take a light frost (Hardy to -5°C) if it is in dry soil. USDA zones 9A – 11.
Uses: Container, rock garden.
Propagation: Seed in spring or cuttings. It is easily propagated by seed.