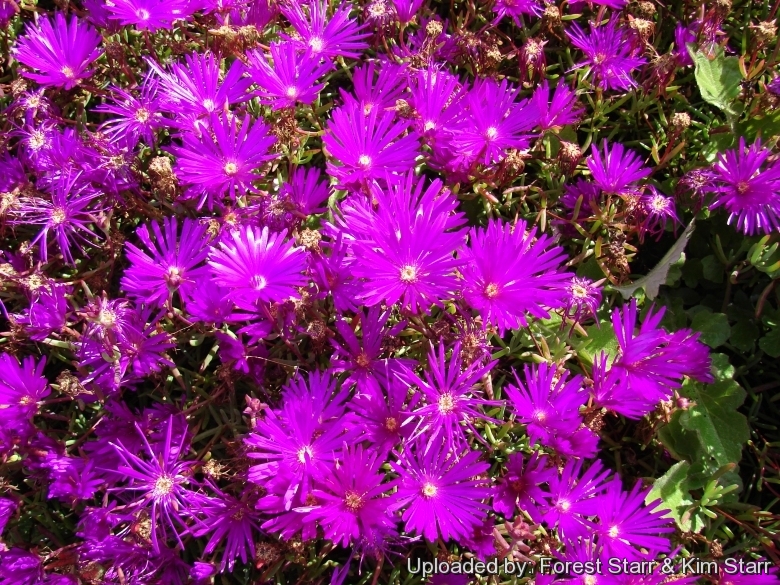 Origin and Habitat: South-western Cape, South Africa.
Habitat and ecology: Un-known. Introduced and naturalized in west Cornwall and east & west Cork in England and elsewhere in the world.

Description: Lampranthus roseus, now considered to be a type of Lampranthus multiradiatus, is a low-growing, erect or slightly spreading, cushion or mound forming succulent shrubs 30-60 cm tall, woody below, that produces a profusion of flowers in varying shades of pink and cyclamen on the ends of grey-green shoots. The species is particularly impressive when massively planted on large areas to cover the soil.
Leaves: (10-)2.5-3(-40) cm long, 4 mm broad, triquetrous (3-angled), terete or slightly falcate, sessile, basally narrowed, flattened, obtuse or tapered and shortly pointed or obscurely mucronate at the tip, opposed pairs shortly united, grey-green, glaucescent, with prominent translucent dots.
Flowers: Terminal, solitary, actincmorphic (daisy like), (2-)3-4(-5) cm across, with yellow centres and petals that vary between pink and purple depending on the season. Petals flesh-coloured to palest pink to purple. Sepals 5. Stigmas 5. Stamens white. Stalks c. 5 cm long. Red and white flowering form are known in cultivation. The blooms have a slight peppery smell and are pollinated by bees and beetles.
Blooming season: Mid-spring or early to summer.
Fruit (capsules): Woody, opening by 5 winged valves. 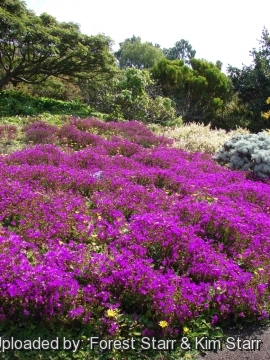 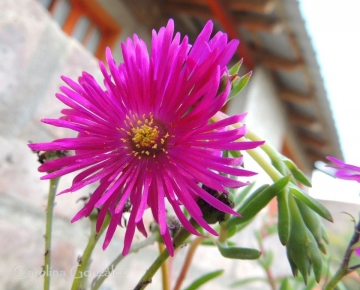 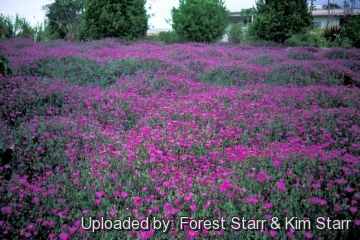 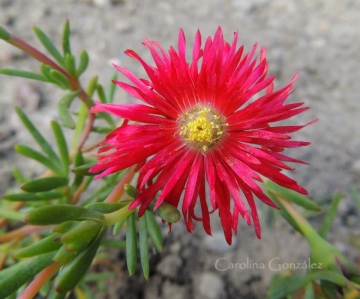 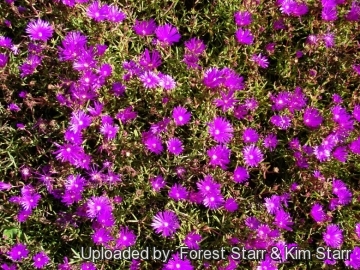 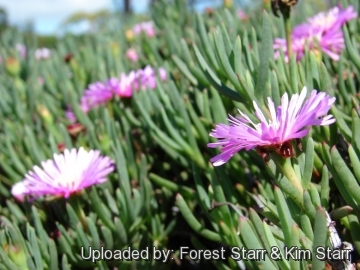 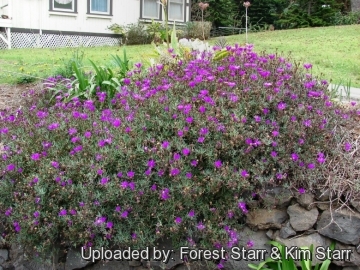 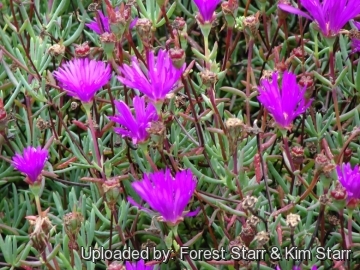 Cultivation and Propagation: Lampranthus roseus is a popular, maintenance-free, relatively short lived perennial groundcover, sometimes grown as annual. It is used to cover banks and slopes in tropical and warmer temperate areas of the world. In areas prone to heavy frost, grow in an intermediate greenhouse or conservatory, in pots of cactus compost, obtainable from good garden centres. Provide maximum light all the year round.
Soil: It prefers well-drained, sandy soils.
Watering: Water regularly from early spring to the end of autumn when soil becomes dry, and keep the compost quite dry when the plants are dormant watering, only if the plant starts shrivelling (, but they will generally grow even in winter if given water). Its morphological characteristics indicate that it can over-summer without much water and then grow vigorously during the rainy season, although constantly wet soil can cause it to rot.
Fertilization: Fertilize very lightly in early spring.
Hardiness: Zones: 9-11. Plants are reputedly relatively tender, and hardy to about -4(-7) degrees Celsius. Cold weather kills them down to the ground, but they rebound with the onset of warm weather. North of Zone (8B-)9, it must be grown as an annual.
Light: Sun to half-shade. This plant needs some protection from the sun in climates that become very hot in the summer; however, it will not bloom well if it does not receive enough sunlight. So, areas that have morning sun and afternoon filtered shade would be the best locations in which to plant Lampranthus roseus in these climates.
Salt tolerance: High.
Pest and diseases: It is sensitive to powdery mildew.
Maintenance: Trim or cut around the edges if plants grow out of bounds. Mulching during the winter may help it to come back in areas where it is marginally hardy.
Uses It is an easy-to-grow succulent groundcover, ideal for low-maintenance and water-wise gardens. It is a moderately drought-resistant. Use it in rock gardens and other small, sunny spots where its fine texture and delicate appearance can be appreciated.
Propagation: Cuttings in summer, seeds. Seeds can be sown in early to mid-spring and germinated in heated humid environment. Alternatively, use stem-tip cuttings, nodes root when they touch the ground. When stuck in moist soil, they root within two or three weeks. Rooting medium should be well-drained, or cuttings will rot. In six weeks they are actively growing and ready to be panted in the ground. To establish a groundcover over a large area, plant individual plants 20-40 cm apart.