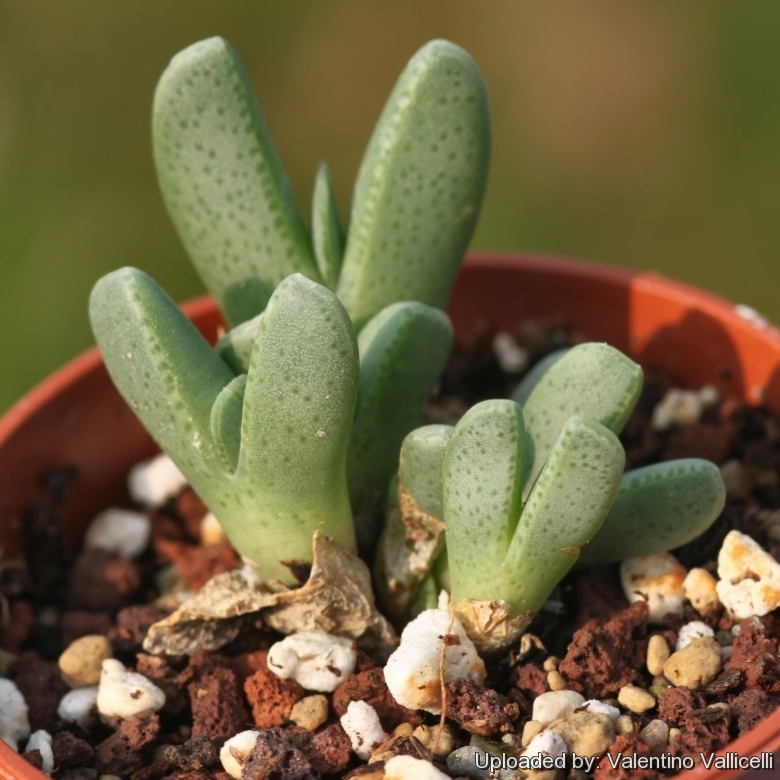 Origin and Habitat: Cheiridopsis amabilis is a rare habitat specialist, known from fewer than five subpopulations in the Northern Namaqualand, Northern Cape, South-Africa.
Habitat and Ecology: Succulent Karoo. This species grows on steep quartz slopes. It is not threatened.

Description: Cheiridopsis amabilis is a compact, cushion-forming succulent with leaves slightly unequal in length, mucronate, many of which with an additional keel tooth near the leaf tip. This species is most similar in shape to Cheiridopsis schlechteri, but its leaf resembles that of Ihlenfeldtia excavata in the pronounced horizontal keel portion with frequently one or two teeth.
Derivation of specific name: Latin “amabilis”: loveable, pleasing, for the general appearance of the plant.
Leaves: Slightly heterophyllous (dimorphic), free parts spreading, often curved, tip with a mucro and often with 1-2 small teeth. Keel almost horizontal in the apical part.
Flowers: Daisy-like, petals ivory, pale greenish-white to pale lemon-yellow.
Fruits (capsules): Generally 10-chambered, with a flat top. Capsules are hygrochastic, a mechanism whereby seeds are dispersed by raindrops. When it rains, the keels of the wet seed capsules push open valves. Raindrops hitting the open seed capsule splatter seeds in different directions, thus ensuring recruitment and the subsequent survival of the species.
Seeds: Pale brown, finely tuberculate.

Cultivation and Propagation: Cheiridopsis amabilis is a "winter" grower which is most active from late winter until later spring and heading for summer dormancy . The growing season in northern hemisphere is from September to March. It is is relatively difficult to grow because rots easily. Paying attention to the particular growing requirement of Cheiridopsis amabilis is especially important. If you provide the plant with the right conditions, it will reward you with it unique shape and size. However, it is a tricky plant that is very particular about its growing conditions and require the right maintenance in order to keep happy. The plant is dormant and sheaths over in summer heat.
Soil: It grows best in sandy-gritty soil and requires good drainage as it is prone to root rot. It can grows outdoor in sunny, dry, rock crevices (protection against winter wet is required).
Fertilization: It thrives in poor soils ans seems very sensitive to an excess of potassium.
Watering: Water minimally in summer. Water regularly in winter after the new long green leaves appears at their extremities in autumn after the summer resting period. Requires good drainage.
**Fertilization: Be careful not to apply too much fertilizer. Feed it once during the growing season with a fertilizer specifically formulated for cactus and succulents (poor in nitrogen), including all micro nutrients and trace elements diluted to ½ the strength recommended on the label. It thrives in poor soils and need a limited supplies of fertilizer to avoid the plants developing excess vegetation, which is easily attacked by fungal diseases.
Light: It needs a bright sunny or light shade exposure in winter, but keep cool and shaded in summer. Ensure a very good ventilation.
Hardiness: It prefer a very bright situation and will take a light frost (Hardy to -5°C) if it is in dry soil. USDA zones 9A – 11.
Repotting: Avoid to repot frequently. This plant may stay in the same pot for many years. Plants grown in larger containers have frequently relatively poor flowers. It might improve when the plants are given their own, small individual pots.
Pests and diseases: It is vulnerable to mealybugs and rarely scale.
Uses: Container, rock garden.
Propagation:*** Seeds, cuttings. It is relatively difficult to root it from cuttings and generally pointless as well, so quick are they from seed.