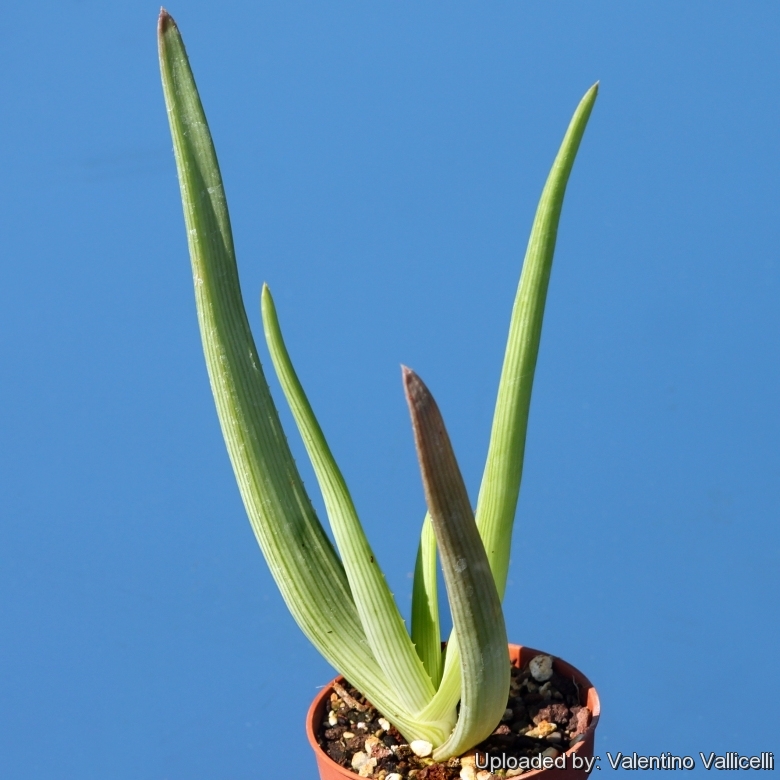 Description: Aloe ibitiensis (= Aloe ibityensis) is a stemless, perennial, leaf succulent from Madagascar that grows in single rosettes, seldom in groups, with not too many leaves at a time. The leaves are yellow to olive green 25-30 cm long, thick and fleshy, upright and markedly lined. The few-branched inflorescences are covered with upright, bright scarlet flowers near the end of branches. It is a very attractive species, but rare in cultivation.
Derivation of specific name: The epithet ibitiensis refers to the occurrence of the species on the Ibity mountain in Madagascar.
Stem: Aloe ibitiensis is almost acaulescent, but as ages, tends to 'crawl' along the ground leaving a bare short stem behind it.
Leaves: 12-16, densely rosulate, somewhat rough, stiff, tapering, lanceolate-acute, nearly flat 25-30 long, 7 cm wide, light lime-green, yellowish-green to olive-green (deep burgundy when stressed), prominently lineate-striate. Marginal teeth 1-2 mm, firm, whitish to pale yellowish, 3-5 mm apart.
Inflorescence: Racemose about 80 cm tall, with 2 - 4 brnches. Racemes cylindrical-acuminate, 25 long, 5 cm in diameter, fairly dense. Bracts ovate-acute, 4-7 mm long, 2-3 mm wide. Pedicels about 14 mm long.
Flowers: Scarlet, 26 mm long, base attenuate, 4-5 mm in diameter across the ovary, enlarging above. Tepals free for 9 mm. The stamens and the style barely protrude out of flower.
Chromosome number: 2n = 14.

Cultivation and Propagation: Aloe ibitiensis is an attractive and interesting middle sized aloe cultivated typically as a potted plant in greenhouses or outdoors in mostly frost-free regions. It easy to grow and suited for any well drained soil and requires little care.
Growing rate: It grows slowly, but not agonisingly so. In the garden it is often in danger of being overgrown, smothered and killed by faster growing plants in its vicinity (can get lost in busy landscape).
Soil: Requires a loose, humusy soil with plenty of drainage chips at the bottom of containers. It prefers soil of slightly acidic pH.
Fertilization: It needs a perfect fertilizer diet in summer. Use preferably a cacti and succulents fertilizer with high potassium content including all micro nutrients and trace elements or slow release fertilizer.
Exposure: It prefer filtered sun or half-shade, but tolerates full sun, and a plant that has been growing in shade should be slowly hardened off before placing it in full sun as the plant will be severely scorched if moved too suddenly from shade into sun. In summer it is advisable to position this plant in a partially shady place, where it is exposed to direct sunlight only during the coolest hours of the day.
Watering: It tolerates weekly (or more frequent) watering in the summer; once a month, or not at all in the colder months of winter. Can withstand periods of drought, but it will thrive and flower more profusely if watered in the correct season.
Pest & diseases: Incorrect watering, poor drainage or too much shade can lead to attack by pests and diseases. Rot it is only a minor problem with aloes if the plants are watered and “aired” correctly. If they are not, fungicides won't help all that much.
Hardiness: This plant comes from mountainous regions so far seems to be a pretty hardy aloe. t doesn't like cold weather during the growing season, therefore in the Spring it is best to set it outside only when the temperatures are above 15°C. Can endure temperatures below -4°C for short period, but only if the soil stays completely dry.
Gardening and landscaping: In mild climates it can be cultivated outdoors for use in landscaping with a climate not too cold, and not too wet. It can be grown in containers too.
Propagation: By seeds planted in autumn, in trays of coarse river sand. Cuttings can also be used for propagation. Cuttings must be dried out for at least 1 weeks before planting in river sand.