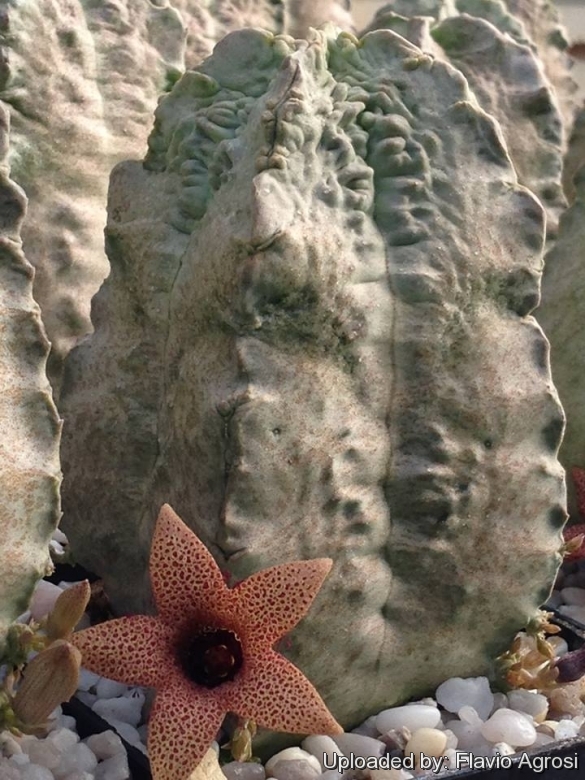 Origin and Habitat: Northern Somalia. (Somaliland). The locus classicus, where Whitesloanea crassa was found by Drake-Brockman, is "near Odweina". The locality is to the north, just south of the Sheikh Pass in the Golis Mountains between Burao and Berbera. Whitesloanea crassa was discovered by Drake-Brockman in 1914. Between 1942 and 1957, Bally visited the locus classicus several times, searching for it but without success. In October 1957, Mr Roy Tribe, a forest officer, obtained several individuals but from a second locality; it has not been seen since, despite careful searches of both areas by Bally and Lavranos in recent years.
Habitat: Whitesloanea crassa is found in the drier parts of northern mountains in stony, semi-desert, where the species grows in bare ground among stones which it superficially resembles. Although much of the surrounding habitat is very similar, the plant was only found in a very small area. Individuals are found growing very far apart from one another and never in large populations. This plant is now endangered or extinct and it isn't clear how large the original population was or what effect the removal of plants has had on the species. According to Bally, Horwood & Lavranos, this restriction is due to the increase in grazing animals in the region over the past few decades and the the continuing desertification throughout the Horn of Africa. Whitesloanea crassa are particularly vulnerable to grazing since they are succulent, but do not have any protective spines, as in the cacti, nor the acrid corrosive latex of the euphorbias. This species is believed to be extinct and its survival in the wild is unlikely, but the survival of this peculiar plant is now assured by cultivation. Whitesloanea crassa has been succesfully rescued from presumed extinction by cultivation.

Description: Whitesloanea crassa is a small, unusual, succulents with mostly solitary compact, 4-angled stems. The squat cubic shape of wild specimens is very peculiar, but cultivated plants are often taller with an elongate, tapering stem. Seedlings has been impossible to find since a few years ago and very expensive, but now plants are offered constantly and Whitesloanea has become nothing more than a has-been.
Stem: Succulents, unbranched, cylindrical to conical, quadrangular, ascending to erect, 3-5(-13) cm long, 4–5.5 mm wide. Ribs sharp-edged, crenate-dentate meeting at the apex light green to light brown, glabrous , with conspicuous wax covering. Tubercles small hardly porrect, laterally compressed. Latex colourless.
Roots: Fibrous.
Leaves: Absent.
Inflorescence: Inflorescences are produced in vertical rows along the ribs near the base of stem at ground level, often along every angle, from a short deciduous fleshy peduncle. Peduncle to 17 mm long with numerous bracts, developing 5–20 stalked flowers in succession, but only 1–2 flowers open synchronously. Pedicels 5-15 mm long, 1.5-2 mm wide, horizontally spreading or somewhat ascending.
Flowers: Bell shaped to deeply funnel-shaped, and showy, to 20 mm long and 20(-33) mm in diameter with tube 10-12 mm long and 7-9 mm across. Lobes triangular, apically acute, spreading at an angle of 45°, marginally revolute about 13 mm long and 5-8 mm wide, margins basally with purple clavate hair 1.5-2 mm long. Sepals 2-4 mm long, lanceolate. Corolla 30-33 mm in diameter, fleshy; outer surface whitish-green, maculate with fine purple dots glabrous. Innner surface cream to light yellow, rugose, dotted with dark red-brown with, hair-papilla, these semiglobose to conical, apically sometimes with a bristle, bristle very acute, short and straight to long and geniculate. Corona biseriate, shortly stipitate, deeply divided. Outer corona arising at the base of the corolla, lobes dark purple, broadly linear, pointed, divided to the middle. Inner corona obconical, 5-lobed, slightly higher than outer corona lobes and enclosing the staminal column.
Fruit (follicles): 1 or 2 spindle-shaped.
Tasonomy: On account of the unique and peculiar structure of the corona, coupled with the unusual growth form, Whitesloanea crassa has been assigned a genus of its own. It is thought to be related to the rare and severely threatened Pseudolithos also confined to Somalia. But most recently was a phylogenetic study published by P. V. Bruyns in 2000 that showed that Whitesloanea crassa is related to two other African succulents, Duvalia and Huernia.

Notes: In Somalia it is protected by the locals, being some kind of sacred medicine: “They kill you if you take it with you” 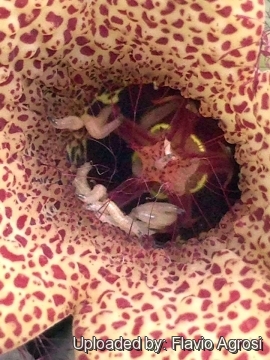 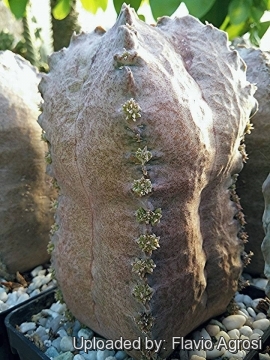 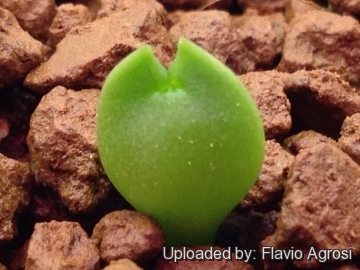 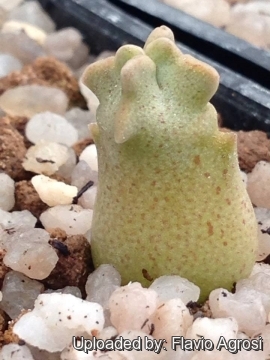 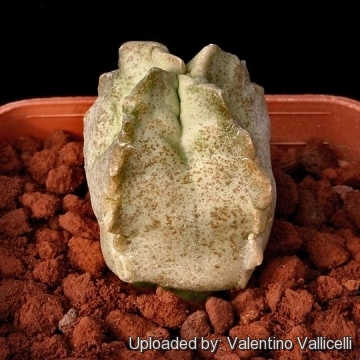 - The shape of this strange plant looks somewhat like a small Astrophytum myriostigma quadricostatum. It is thought to be one of rarest succulents and sought after by succulent enthusiasts. Photo by: Valentino Vallicelli 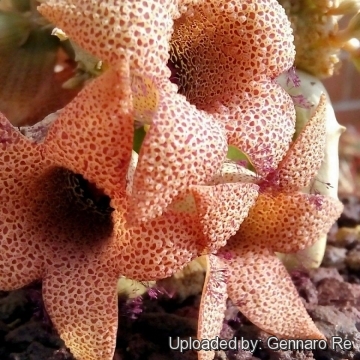 Whitesloanea crassa Photo by: Gennaro Re 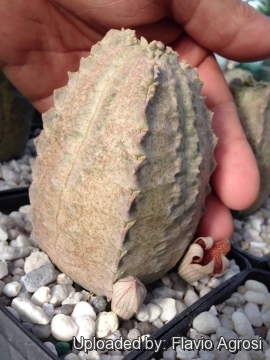 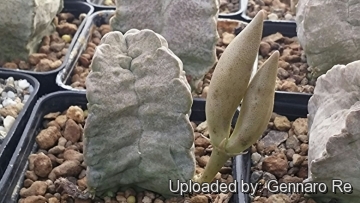 Whitesloanea crassa Photo by: Gennaro Re

Cultivation and Propagation: Whitesloanea crassa is relatively easy to grow, but mistakes are costly. If rot sets in, there is practically no time, nor warning, before the plant turns to expensive mush.
Growth rate: It grows quickly (a young plant will easily grow more than a 4 cm in a year) and a plant correctly grown may flowers in less than 2 years.
Moisture: It needs regular watering, especially during the hottest summer days; provide also some light watering if the green house temperatures in winter are elevated. Either excessive or very scarce watering can induce rot.
Frost Tolerance: Winter temperatures must be kept over 10° C. But it can withstand winter night-time temperatures down to about 5° Celsius for short period. Freezing temperatures are fatal.
Sun Exposure: It has a great advantage if grown in very strong light, but sheltered from full sun.
Cultural Practices: Provide very good ventilation. It grows quite easily and fast on its own roots. It is not difficult as commonly supposed, but inaccuracies are fatal. If rot starts, the plant will almost inevitably die. This plant is a candidate for under-potting, as long as you keep it watered.
Propagation: Seeds or grafting.

by Flavio Agrosi
There are a total of 20 Photos.
Click here to view them all!
Cite this page: "Whitesloanea crassa" Text available under a CC-BY-SA Creative Commons Attribution License. www.llifle.com 14 Nov. 2005. 30 Sep 2020. </Encyclopedia/SUCCULENTS/Family/Asclepiadaceae/12774/Whitesloanea_crassa>