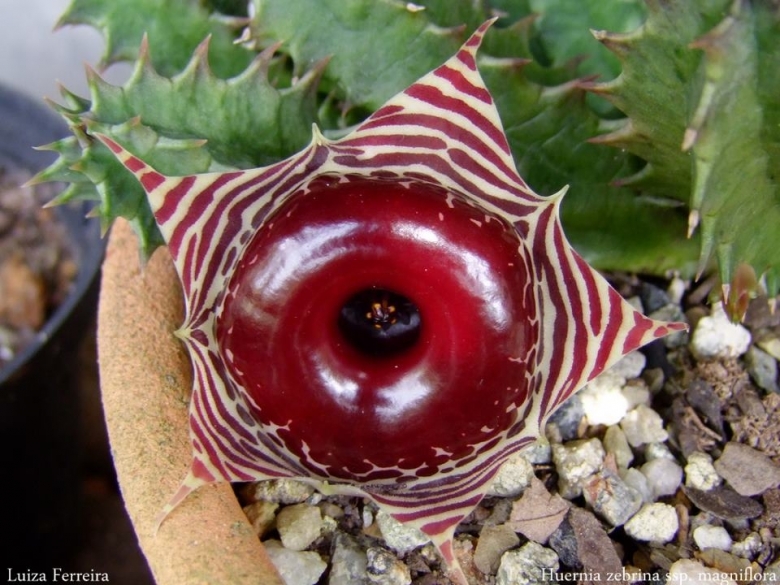 Origin and Habitat: Huernia zebrina subs. magniflora occurs throughout the Limpopo catchment area in the Northcm Province, in Zimbabwe and in Namibia.
Altitudes: It occurs at low altitudes.
Habitat: Open dry scrubland, in stony areas, often in calcrete or hard loamy soils.

Description: Huernia zebrina subs. magniflora is a more xerophytic form distingushed from subs. zebrina by its flowers that are are twice the size of those of the typical subspecies, up to 85 mm across, and for the 4-angled stems which are taller, irregularly branching and not mat-forming. It is one of the most beautifully flowering huernias and very popular in cultivation for its odd blooms. It has a raised, glossy, wine-red ring or 'annulus' around the mouth of the corolla tube. The corolla varies in size and is usually patterned with wine-red zebra stripes which vary conspicuously in colour intensity. The blooms are also very shiny and may look like plastic, but it's for real. One of the so-called “lifebuoy” huernias because of the glossy raised annulus.
Notes: In more recent literature subs. magniflora is generally no longer considered taxonomically distinct from subs. zebrina (eg. Bruyns 2005) because at many places intermediate populations can be found. A definite population consists of a collection of variable forms.
Stems: Deflexed-decumbent or decumbent-erect, laxly branched, tapering, prominently 4- (to 5-) angled, and irregularly branching, up to 8 cm long,12 mm in diameter and strongly toothed. Teeth 4,5 mm long.
Inflorescence: Few-flowered on a 12- 14 mm long peduncle.
Flowers: The flower is anything up to 8,5 cm (usually 6-7 cm) in diameter, star-shaped, the prominent shiny annulus is glossy red to purple-brown, marked or unmarked, the 5 corolla lobes are acuminate, greenish-yellow with red to purple cross-zebra-stripes; both sides glabrous. As with other plants of the genus, H. zebrina has a small intermediate lobe. Sepals 6-8 mm. Frequently the flowers are larger than the plant itself and emit the smell of carrion. The rotting flesh odour attracts flies who transfer the pollen as they search from flower to flower for the non-existent rotting meat.

Subspecies, varieties, forms and cultivars of plants belonging to the Huernia zebrina group 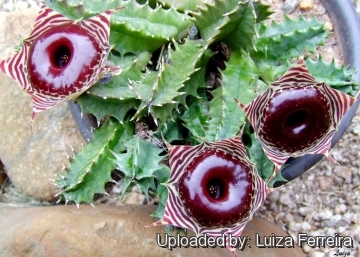 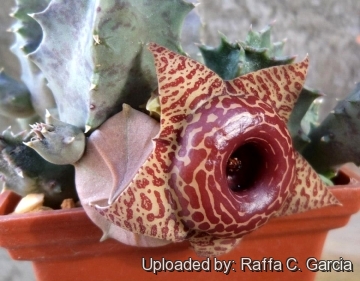 - This subspecies has larger flowers, with corolla up to 8,5 cm accross, but variable in size, colour and markings. Photo by: Raffa C. Garcia 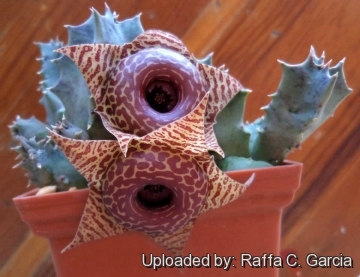 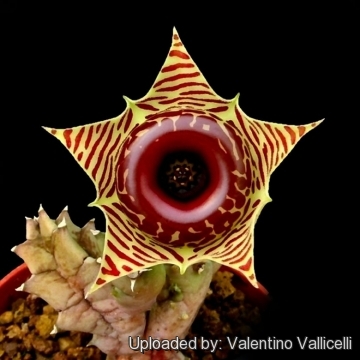 The shiny, large flowers may look like plastic, but it's for real. Photo by: Valentino Vallicelli 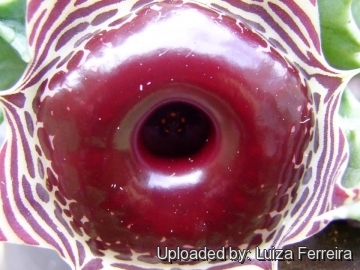 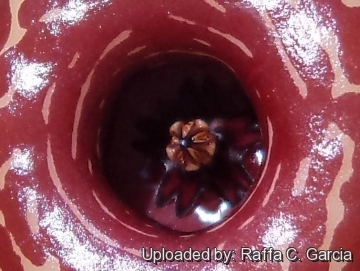 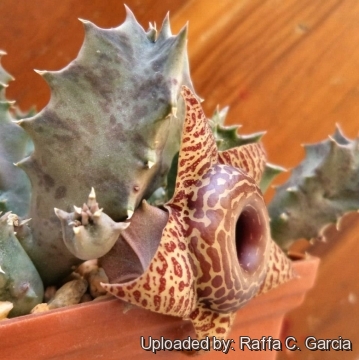 Cultivation and Propagation: Huernia zebrina subs. magniflora isn't difficult to grow and flower. Both subspecies require a very draining substrate with a big portion of sharp sand or perlite or pumice. They need winter temperature over 10 °C and they need very careful watering during warm days. As with other stapeliads, the most dangerous diseases and pests are black rot and mealy bugs. The easiest way of propagation is by rooting stem cuttings or by sowing, if seeds are available. Half shade in Summer.