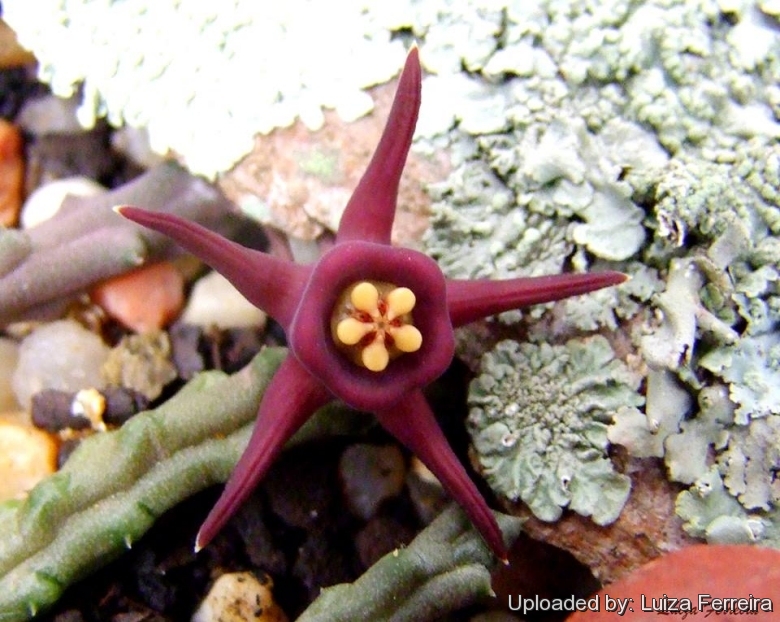 Origin and Habitat: Western Cape (coastal areas from Cape Infanta to Klein Brak River near Mossel Bay.), South Africa. Extent of occurrence less than 1400 km², three to five known locations.
Habitat and Ecology: It grows in arid to relatively moist coastal fynbos vegetation, on shale and limestone. It is threatened by coastal development, wheat farming and stone quarrying. Alien species are also a severe and ongoing threat at all localities. 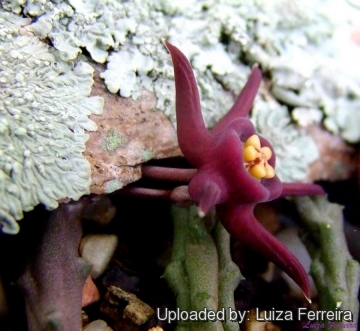 Duvalia immaculata Photo by: Luiza Ferreira
Send a photo of this plant.

Cultivation and Propagation: Duvalia immaculata is a tiny, but easy obliging blooming plant when mature, that it is happy in any average succulent house. This species favours more humid conditions than other duvalias.
Potting: Since roots are quite shallow, use a soft and incoherent cactus mix or add extra perlite or pumice to regular soil potting soil, and clay pots help the plants to dry out between watering.
Waterings: Duvalia require moderately watering through the growing season but enjoy plenty of water and some fertiliser in hot weather, this helps them to flower freely. Water more sparingly in winter according to temperatures. But, as with most asclepiads, it is unwise to leave them wet in cold weather.
Fertilization: Fertilizers for succulent plants must be rich in potassium, but poor in nitrogen, to avoid the plants from developing excess vegetation, which is easily attacked by fungal diseases.
Sun Exposure: As with many succulents, they prefer to grow in the light shade of scrubby shrubs or between rocks where they get some shade during the day. In summer it is advisable to position this plant in a partially shady place, where it is exposed to direct sunlight only during the coolest hours of the day.
Hardiness: These plants don't like cold weather, therefore in the Spring it is best to set them outside only when the temperatures are above 15°C. Can endure temperatures below 5°C for short period, but only if the soil stays completely dry.
Pest and diseases: Duvalias species vary in their susceptibility to rotting, but are generally fairly easy to grow, especially if kept pest-free. They are very susceptible to stem and root mealy bugs, and damage from these may well initiate fungal attack. If you do have problems with a stem or with basal rotting, you can reliably isolate the healthy parts, dry them off, and re-root them in moist compost.
Cultural Practices: Re-pot every 2 years.
Propagation: Easiest with stem cuttings. Allow cuttings to dry a day before planting. Stems must be laid (Not buried) on gritty compost and will then root from the underside of the stems. It can also be increased from seeds sowing in spring in moist, sandy peat moss. Barely cover seeds. Seeds germinate quickly.