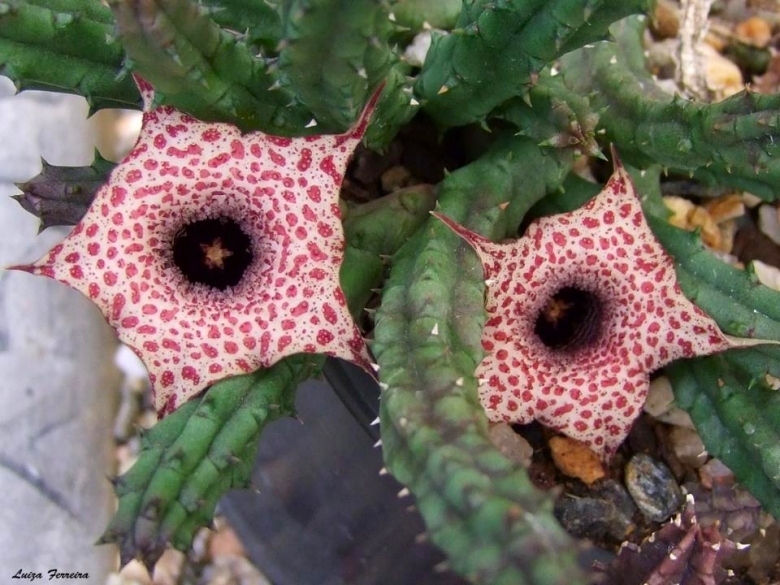 Description: Huernia hislopii (commonly known as 'dragon flower') is a tufted, leafless succulent, consisting of a number of five-angled stems, occasionally forming large clumps. These stems are green during the rains but usually turn reddish brown in the dry winter months. The ridges on the stems form fleshy, thorn-like points, which serve as "leaves". The flowers in many related species emit a distinctive carrion smell in order to attract carrion flies, which are the pollinators, but H. hislopii has little or none of that smell. The flowers may appear now and then from the midle of spring and it can bloom all the way until winter. Over the years this species has been thoroughly confused with H. kirkii, which in turn was redescribed as H. bicampanulata.
Derivation of specific name: hislopii: named after A. Hislop, formerly of St. Faith's Mission, Rusape.
Stems: Clustered, erect or ascending, c. 5 (or more under cultivation) cm long and 8-10 mm thick, with prominently 5-(occasianally up to-7) angular. Ribs strongly toothed along the margins with tubercles c. 3 mm long.
Flowers: Facing upwards, rarely prostrate on peduncle to 2.5 cm long. Sepepals 6-10 long 2 mm wide at base. Corolla campanulate 4-6 cm in diameter, outside cream-coloured, inside cream-coloured, stippled and mottled with red-brown with 5 acuminate lobes about 22 mm long, 18 mm wide, ome-times more or less caudate, and conspicuous secondary lobes to 6 mm long between them, cream with dull maroon spots, papillose, with a tube to 1.6 mm long and inflated below to 11 mm in diameter, marked with transverse red-brown lines, mouth abruptly reflexed. Corona c. 5.5 mm tall, with outer lobes rectangular, dark maroon to black and dappled inner lobes c. 4-4.5 mm long, cream-coloured with red-brown markings, obtuse, divergent, curved like horns rarely erect. Pollinia yellow.
Flowering time (in habitat):Autum (Feb – Mar).

Subspecies, varieties, forms and cultivars of plants belonging to the Huernia hislopii group 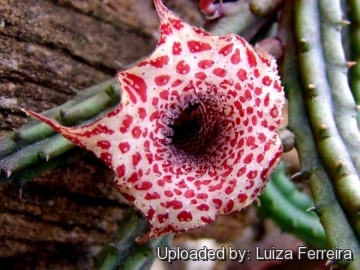 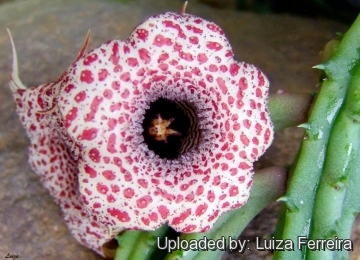 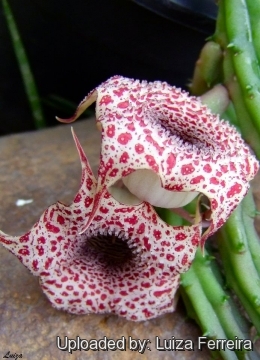 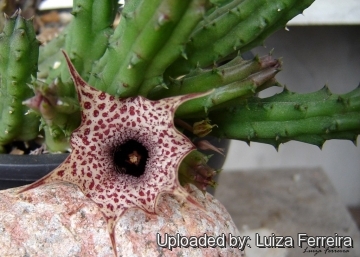 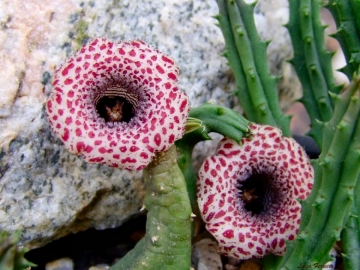 Huernia hislopii Photo by: Luiza Ferreira
Send a photo of this plant.

Cultivation and Propagation: Huernia hislopii isn't difficult to grow and flower.
Spring: When winter ends and they begin to grow again, they will require much water and soaking the pots will no longer put the plants at risk for rot. In the spring they will grow well in partial shade and leaving them out in the rain may provide them with the water they need.
Summer: In the summer months they will tolerate heavy rain, but will be just as happy if the season is dry. It's best to sort out the stems while the plants are resting in the summer before they begin their autumnal growth cycle. They will tolerate very hot weather outdoors as long as they are kept in filtered light and this will encourage them to flower in the Autumn. They also enjoy some fertiliser. Moving the plants as they are developing buds may cause them to spontaneously abort the flowers all together.
Autumn: In the fall keep them outdoors until the night time temperatures drop below the 10°C.
Winter: Winter care presents no problems at 10° C with plenty of light. As soon as they are flowered be sure to take extra precautions to keep them dry, because damp cool conditions when the plants are resting is an invitation to fungal infections, but - according to temperatures –some occasional lit watering may be useful.
Potting medium: Since roots are quite shallow, use a cactus mix or add extra perlite or pumice to regular soil potting soil. A gritty, very free-draining compost is suitable, and clay pots help the plants to dry out between watering. Re-pot every 2 years.
Pest and diseases: Huernia are generally fairly easy to grow, especially if kept pest-free. They are very susceptible to stem and root mealy bugs, and damage from these may well initiate fungal attack. Any time when there is a dead or dying stem in the pot it is important to remove it immediately and completely before other healthy stems can become ill too, isolate the healthy parts, dry them off, and re-root them in new compost.
Propagation: Easiest with stem cuttings. Allow cuttings to dry a day before planting. Stems must be laid (Not buried) on gritty compost and will then root from the underside of the stems. It can also be increased from seeds sowing in spring in moist, sandy peat moss. Barely cover seeds. Seeds germinate quickly.
In any season it's best to lay the stems out for several days before replanting them and then pot them only in dry soil and withhold any water until they begin to shrivel or start growing again.