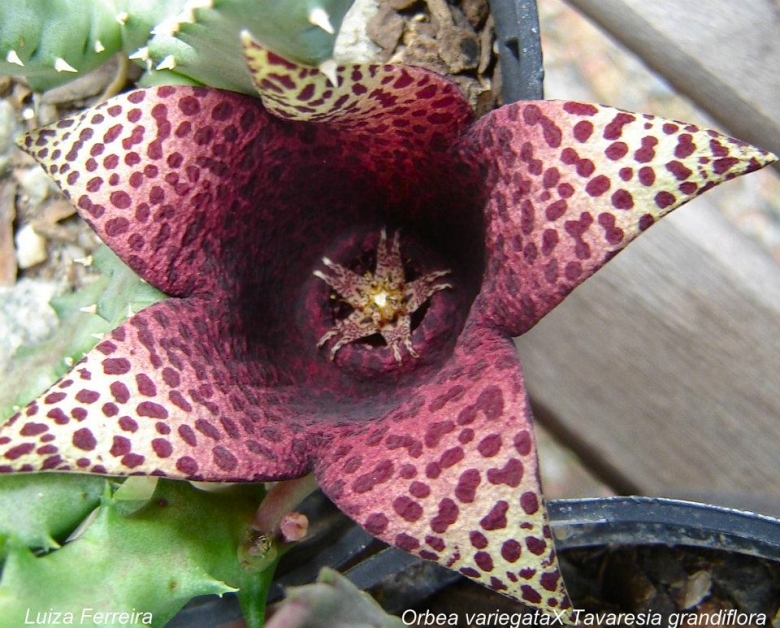 Origin and Habitat: x Tavarorbea is an intergeneric hybrid between Tavaresia Welwitsch and Orbea Haworth. This name is an amalgam of the two parental generic names, and was coined because the seed of the one known cross was produced on a plant of Tavaresia. The cultivar ‘Red Leopard’ (Walker, 2004) was raised from seed produced on a plant of Tavaresia barklyi at Coromandel Cacti, New Zealand, in 1992. The only other stapeliad in flower in the greenhouse at the time was Orbea variegata, so the putative parents are Tavaresia barklyi (Dyer) N.E. Brown × Orbea variegata (L.) Haworth.

Description: x Tavarorbea cv. Red Leopard is a beautiful hybrid with colourful flowers about 5 cm across with the corolla lobes folded back. When first open, before the lobes curl back, the flower is about 8 cm across. Characteristic of this hybrid is the shallow bell-shaped tube that is more prominent than the flower tube of Orbea variegata, but wider and shallower than the long, narrow tube of the flower of Tavaresia barklyi.
Derivation of cultivars name: The name ‘Red Leopard’ was suggested by Martin Walker and aptly describes the purple-red spotted-blotched appearance of the flowers.
Habit: Small clump-forming succulent.
Stems: Up to 15 cm long, 1 cm in diameter, erect to decumbent, freely branching from the base, green mottled purple-brown with projections (tubercles) along the ridges. Tubercles prominent to 1.5 cm long, spreading, arranged into 6 (or more)-angled ribs, tipped with prominent acute tubercles each ending with a central teeth (marcescent leaf), with 2 shorter stipular-spines less than 1 mm long. Sap clear.
Flowers: Produced from stem base, faceing upwards when produced within the clump, but outwards if formed on the colony edge, for they find support on the ground. Corolla to 8 cm diameter, shallowly campanulate (bell-shaped) with a slightly raised, rounded-pentagonal annulus, approx. equal in diameter to the corona, rugulose, dark purple; tube pale green with purple-red spots and blotches, slightly roughened (rugulose) on the surface, darkening into the tube; 5 lobes 3 × 3 cm, broad at base, acute at tip, recurved. Corona lobes speckled; outer lobes spreading and deeply bifid; inner lobes erect.
Hybrid and parents compared: X Tavarorbea ‘Red Leopard’ is clearly intermediate between its parents, although it appears that the features of the Orbea parent are more prominent or dominant, i.e. the hybrid is structurally closer to Orbea than it is to Tavaresia. The stem is low-growing and freely clump-forming, being well-branched. Overall the stems are similar to the Orbea, but the tubercles are tipped with small stiff spines, absent from the Orbea, but significantly smaller than those of Tavaresia, such that the prominent spine-tipped ribs of Tavaresia are far less obvious in × Tavarorbea. The flower is also closer to that of Orbea. The long, deep, narrow corolla tube of Tavaresia is replaced by a shallow bowl-shaped tube, and the brown-purple blotches of O. variegata have become more definitely purple-brown spots. The characteristic droplet-tipped outer corona lobes of Tavaresia are also absent. 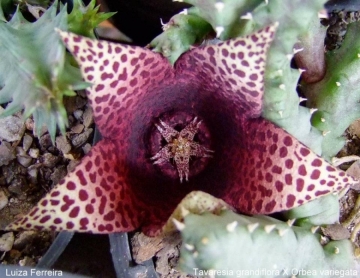 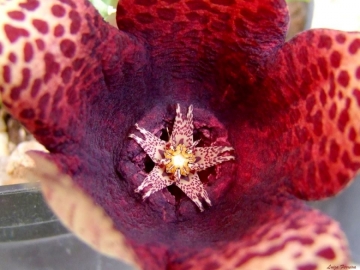 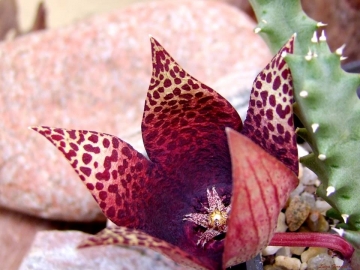 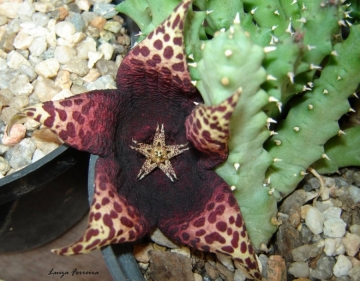 Cultivation and Propagation: x Tavarorbea cv. Red Leopard grows robustly and is far less temperamental than Tavaresia is in cultivation, and hence is more akin to Orbea variegata, which is amongst the most resilient stapeliads in captivity. ‘Red Leopard’ is a worthy addition to cultivation and deserves to be widely grown and appreciated, since it makes an ideal hanging-pot plant, in which the flowers dangle over the pot edge.
Soil: They grow well in light gritty soil with a very liberal drainage.
Watering: They should at all times sparingly watered (best rain water with some occasional fertiliser), and in winter time they hardly require any.
Temperature: They require outdoor culture, or a warm close greenhouse, while growing in the early part of summer, and afterwards may be ripened and kept in a greenhouse; but as they bloom chieﬂy in autumn, warmth is desirable to enable them to expand their ﬂowers. A minimum winter temperature of 5-10°C is acceptable, providing that plants are kept absolutely dry.
Exposure: They prefer light shade rather than full sun, although stems may not colour up under shady conditions.
Pest & diseases: Keep their roots free of mealy bugs, as fungal attack often occurs as a result of damage to stems by insects. A layer of grit on the surface of the compost prevents moisture from accumulating around the base of the stems and minimise the chance of fungal attack on the roots.
Propagation: Plants are increased by cuttings, which, as they are very succulent, should be allowed to dry a week after they are taken off, when they may at once be put singly into pots.