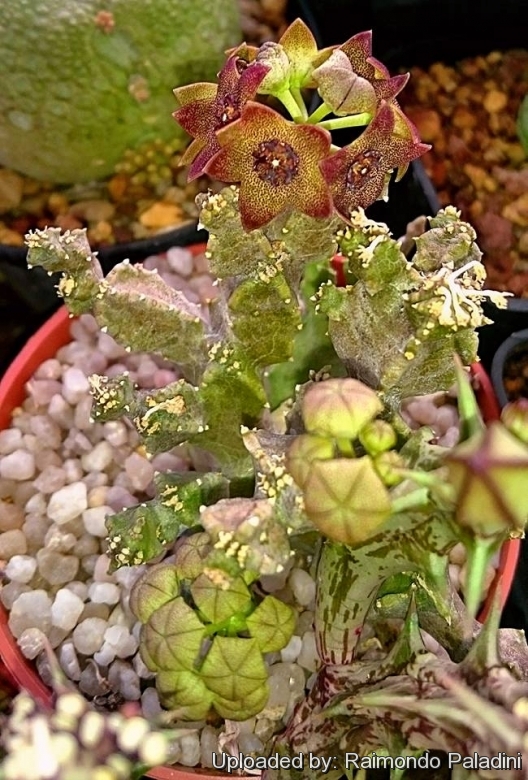 Origin and Habitat: Saudi Arabia, Yemen, Oman. In Oman this species reaches its easternmost occurrence.
Habitat and ecology. Caralluma hexagona grows in rocky habitats, usually in shallow soil in crevices between large stones or in rock outcrops. The greyish colour of the inner surface of the outer corona-lobes presumably caused by the secretion of nectar which rapidly dries out to form a thin, crystalline deposit, coupled with the evil, dung-like odour of the flowers and the clavate cilia that are often present on the margins towards the end of the corolla-lobes, acts as an attractant for the pollinators of these flowers.

Subspecies, varieties, forms and cultivars of plants belonging to the Carallum exagona group

Caralluma hexagona is extremely variable, three species and three varieties have been described but plants with intermediate or not typical characteristics occur at random in each populations, and often within a single population both flat and campanulate flowers will sometimes be found. Nor the shape and colour of the corolla-lobes is sufficient to distinguish without ambiguity between species. The number of ribs varies from 4 to 6, but seems to be unreliable in certain groups, and is therefore of little use in separating these taxa. It appears that there is inherently a large range of variation in many of the features of these plants and it is possible that this is brought about by highly localized modifications of the very harsh environment in which they occur.

Caralluma hexagona Photo by: © Plantemania
Send a photo of this plant.

Cultivation and Propagation: Caralluma hexagona is quite difficult to grow and propagate.
Propagation: It is rooted from side-branches.