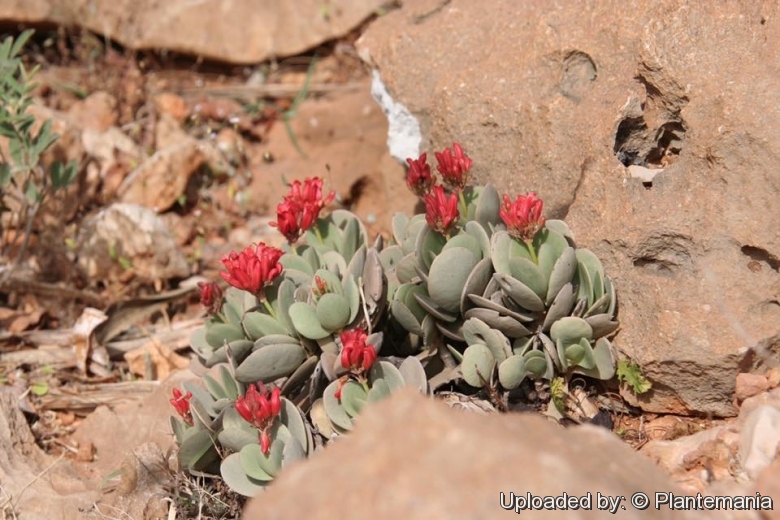 Origin and Habitat: Yemen (Socotra).
Altitude range: 100–800 metes above sea level.
Habitat and Ecology: Kalanchoe farinacea is common amongst rocks in succulent shrubland and drought-deciduous shrubland, mostly on limestone plains of the higher parts of island and also on granite slab. It grows in cracks in the rocks in several vegetation types often in association with Dracaena cinnabari, Duvaliandra dioscoridis, also Sarcostemma socotranum, and Ceropegia spp.

Cultivation and Propagation: Kalanchoe farinacea is a very healthy plant, easy to culture and makes an interesting plant in any collection. It need a, keep it were is bright, sunny, warm and airy.
Potting mix: They thrive in fast draining mix nutrient poor soils consisting of equal parts of loam and sand, with pumice or lava grit added to ensure good drainage.
Exposure: Mature plants do best in full sun to partial shade.
Watering: It needs moderate watering in autumn and spring while in summer it should be watered thoroughly and allowed to dry before watering again. During winter keep them rather dry, not completely (water only when the plant starts shrivelling), but it will generally grow even in winter if given water. These plants will survive on neglect. Over-watering is the most common cause of plant failure.
Frost resistance: It prefers warm temperatures but it is hardy to 5° C for short periods.
Pest and diseases: Whilst generally disease free it can be damaged by pest insects such as aphids, mealybugs and rarely scale. Protect from snails which permanently disfigure the leaves.
Propagation: It is propagated by removal of small offsets at the base of the main plant or by leaf cuttings in May or June, (when it is warm). It grows easily roots at the end of a leaf which has fallen onto ground. New plants are ready within months.