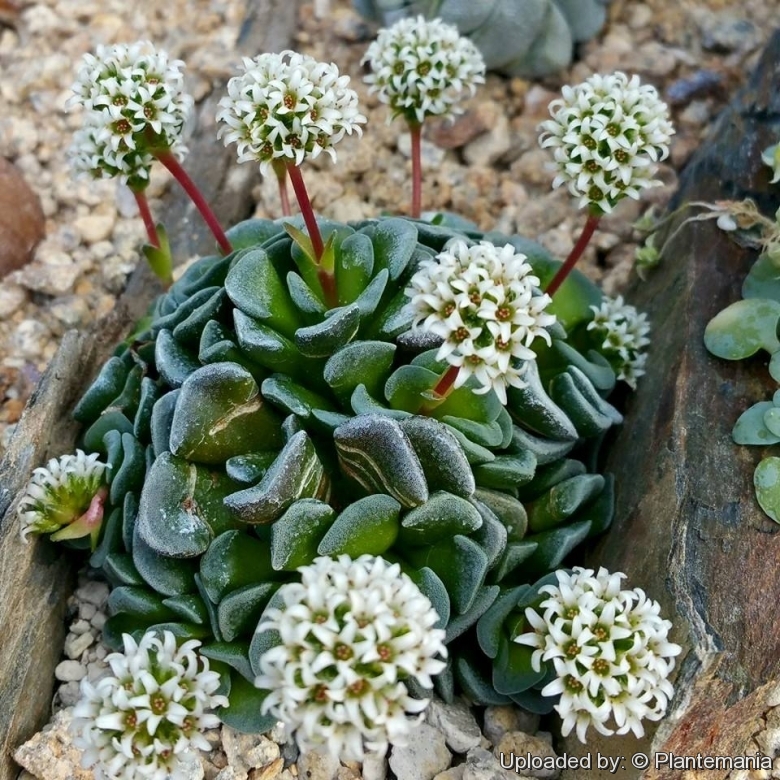 Crassula mesembrianthemopsis Photo by: © Plantemania
Crassula mesembryanthemopsis has close rosettes of greyish cylindrical leaves, and looks very much like the genus from which it gets its specific namel. It looks more like a living stone than anything else.

Origin and Habitat: Cape Cross in central Namibia, Witputz in the south and from the Orange River mouth in the Richtersveld extending eastwards to Kcnhardt in the Northern Cape. Localities are widely separated.
Habitat and ecology: Crassula mesembryanthemopsis grows completely buried in sand or quartz gravel flats but also in areas with surface limestone, where winter night temperatures can often drop to zero. It is one of the so called mimicry plants, with a large turnip-like root. Soils covered with white quartizite pebbles are well known to harbour a vast array of dwarf succulent species. This is due to the highly reflective properties of the quartz which keep soil temperatures cool during the hot summer months. The quartz also provides an ideal seed germination habitat. The seeds can germinate underneath the pebbles, which transmit enough light for photosynthesis, at the same time providing a cool environment protected from the elements. With time the plant will grow and push the pebbles to one side allowing it to reach the direct sunlight. It is not known how long-lived these plants are in the wild but considering the relatively slow growth rate, estimates would be in the region of 2-4 years, perhaps longer if conditions are favourable.

Description: Crassula mesembrianthemopsis (Commonly misspelled "mesembryanthemopsis") is a dwarf, rosulate, perennials succulent with one to few dense rosettes with leaves spirally arranged and with old leaves not deciduous, with the whole plant not exceeding 6 cm in diameter. It grows completely buried in the sand except for the blunt, triangular leaf-tips (about 5mm across) and resembles a small Mesembryanthemum calcareum (then spelled Mesembrianthemum, now placed in Titanopsis; Aizoaceae). Very inconspicuous except when it produces stemless heads of scented white flowers al over the plant; the flowers are small, white, and somewhat similar to those of Crassula teres. This is a very popular species because of its habit of growth and the fact that it grows and flowers during autumn or winter months.
Root: The root is turnip-shaped 5-7 cm.
Leaves: Unusually in the genus, the leaves are arranged spirally, growing sunken in nature with only the upper leaf-margin exposed, old eaves persistent. Leaves 10-20 mm long, 3-6 mm wide, flat, wedge-shaped to almost obpyramidal, usually as thick as broad to almost triangular in section, truncate, gradually tapering towards base, epidermis papillate (less so towards the base), upper face flat, lower face convex, apex truncate. The leaves are grey green in colour with the leaf tips becoming completely grey making them very difficult to spot in the soil.
Inflorescence: Rounded compact, round-topped, dichasium partly hidden by the upper leaves at the centre of the rosette. Peduncle 6-20 mm with recurved fine hairs. Pedicels short.
Flower: Sepals (calyx lobes) to 3.5 mm long, rounded or oblong-triangular and acute, sparingly hairy towards apices, margin ciliate fleshy, green. Corolla tubular, to 7 mm long, fused basally for 0,6-1 mm, white to cream. Corolla lobes narrowly oblong, tips slightly hooded and with indistinct dorsal appendage. Anthers yellow. The plant is autumn-flowering (in habitat from March to May). The inflorescence emits a pleasant fragrance at dusk.
Fruits: Tiny fruits form into capsules which release the minute dust-like seed which is dispersed by the wind and water. 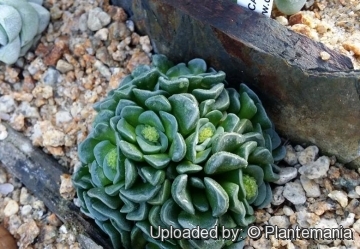 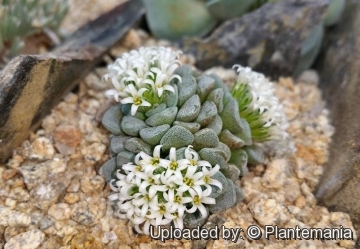 Cultivation and Propagation: Crassula mesembrianthemopsis is one of the smallest and most bizarre succulents in South Africa and is very rare in cultivation. This species, togheter with the other miniature Crassula susannae, is delightful but reputed difficult to grow. However it is, easy to relatively easy to cultivat once the right code has been cracked.
Soil: Use very well drained gritty soils with a low organic content.
Exposition: It does best in bright light with some morning- and/or evening sun. A half shaded place will be tolerated. afternoon sun and high heat in summer can cause leaf drop. Good ventilation and bright light are essential.
Water: Drench the soil well, water running out of the pot’s hole must be removed after a few minutes. Wet legs can cause rotten roots. Before adding water next allow to dry.
Fertilization: Feeding is not necessary and will only cause lush growth which will ruin the refined nature of the plant.
Pests and bugs: Crassulas are sensitive to mealybugs. Large clumps of C. 'Morgan's Beauty' should be lifted and divided in the winter to prevent the clumps from rotting.
Propagation: Leaf cuttings, offsets and seeds. Remove the largest outermost leaves by pulling them away and to the side, tearing them gently away from the stem. Allow the leaves to stand for a few hours so the wound can dry and heal. Insert them into a dry gritty growing medium so that only the leaf tips protrude above the soil surface. Do not water the plants at this stage but rather keep them dry. Keep the pot in a bright situation out of direct sunlight where they will not get any water. After a week, they could receive a light sprinkling of water. Rooting should take place within 2 weeks. Once the leaf cuttings have visibly greened up, move them to a sunny spot, and before long young plantlets will develop into small rosettes. Seeds be sown in autumn. Mix the dust-like seed with a small quantity of fine sand. Spread the sand evenly over the surface of the soil which should be the same as the growing medium. Water immediately, preferably from below by standing the pot in a tray of water every few days. Keep the soil moist like this for the first month or so. Before long, tiny green plantlets should appear on the soil surface. Start to let the soil dry out between waterings. Soon the plants will bulk up and if one achieves the ideal growing conditions, one can raise many thousands of plants like this. The use of a damping-off fungicide is advisable.