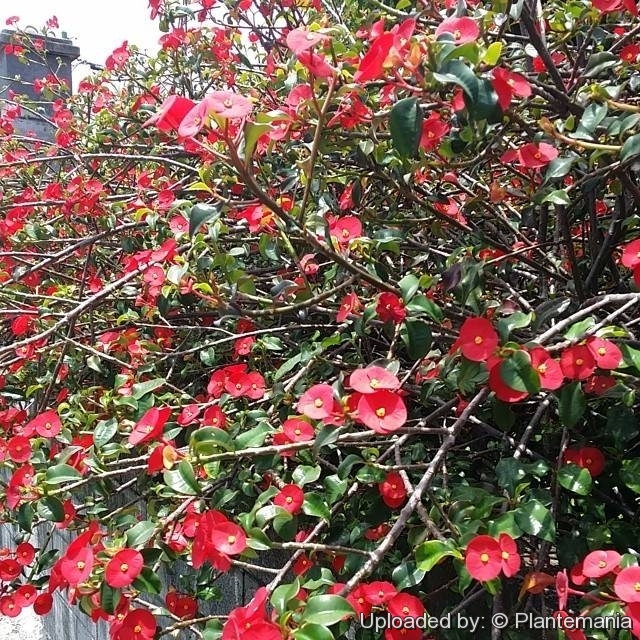 Origin and Habitat: Euphorbia geroldii is endemic to north-east Madagascar, found within the surrounding coastal forest of Iharanae (Iharana), in the Ambilobé region. The area of occupancy is below 1 km². Euphorbia geroldii is known only from the type locality.
Habitat and Ecology: Coastal forests on sand. The species is treated by habitat degradation, fire, habitat clearing for charcoal. Collection for national and international horticultural trade It is.highly susceptible to any disaster, including human induced fires. 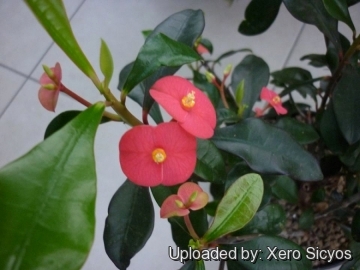 Euphorbia geroldii Photo by: Xero Sicyos
Send a photo of this plant.

Cultivation and Propagation: Euphorbia geroldii is cultivated as an ornamental, and is a particular favourite thorn-less houseplants. Cultivation of this plant is the same as that for the other shrubby varieties of euphorbia from tropical areas (Madagascar, and central Africa), but it is one the easiest of all. Hummingbirds love it.
Growth rate: It is a relatively fast growing species.
Exposure: Outside it likes semi shade, inside it requires full to part sun, and a plant that has been growing in shade should be slowly hardened off before placing it in full sun as the plant will be severely scorched if moved too suddenly from shade into sun.
Wind and salt tolerance: This species is particularly tolerant of seaside conditions and salt spray, making it an excellent choice for planting along the coasts.
Waterings: Relatively flexible in its watering requirements. They can be watered regularly as long as the medium is open and well drained. As with any normal plant when watering, it is best to do so thoroughly, until a little water comes out through the drain holes. Allow the medium to dry out somewhat between waterings. Reduce watering to once every 1 month during winter. Space plants apart to allow air movement between branches and leaves. This will help with evaporation of extra water droplets collected during watering.
Soil: The ideal potting-medium is one with good moisture-retaining capacity but open and well drained with some extra manure for added nutrition.
Fertilization: Regular fertilizing with low nitrogen and high phosphorus and potassium ratios are preferred. Feed during spring and summer to mid autumn and withhold feeding during winter.
Maintenance: Tall plant will benefit from being staked, with bamboo or other suitable stakes. In the absence of staking, the stems of the plants get leggy quickly but responds to pruning. It can be trained into a beautiful and exotic small tree standard.
Hardiness: Very tender, protect from frost. As the natural way they need in winter at least 12 to 15 °, with adequate irrigation but have no problems with it, to stand next to radiators.
Pest and diseases: Mildew can occur in high humidity.
Uses: It is a great potted plant, it blooms all summer with pairs of bright red flowers with yellow centres.
Propagation: It is easy in cultivation and easy to propagate by cuttings. Cuttings It is recommend taking Euphorbia cuttings in Spring/Summer when the plant is growing so that they have a better chance of success. They key is heat & good air circulation. These cuttings should be dipped in Hormone powder (but it is not needed) and left for a period of 3-4 weeks to callous. Then pot the cutting and don't water ( or kept slightly moist) until rooted. These will root just fine, if you can put the pot outside in the summer, or put pot on a heating pad.
Warning: The milky sap produced by this shrub has been known to cause burning and blistering of the skin, and even temporary blindness, and death may result if any of its parts are eaten. All of these problems can be avoided if care is taken when handling the plant.