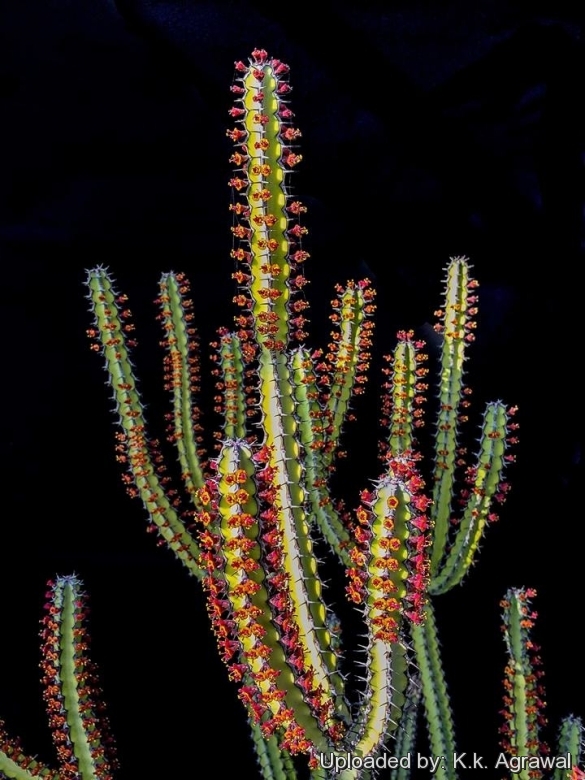 Euphorbia vulcanorum Photo by: K.k. Agrawal
Male flowers. The inflorescences (cymes) are solitary and appear from each flowering eye at the angles of the branches near apex, are composed by 3 almost sessile unisexual cyathia (flowers), each cluster is composed by a central male cyathium (stamens and anthers) that mature firstly, flanked by two lateral female cyathia (ovaries and stigmas) that start developing only when the male cyathium starts to fade.

Origin and Habitat: Euphorbia vulcanorum is endemic to the volcanic Marsabit Massif in the Northern Frontier Province of Kenya (hence the name).
Habitat and ecology: This species grows on lava-strewn rocky slopes with sparse deciduous bushland.
Altitude range: 1000-1200 metres above sea level. 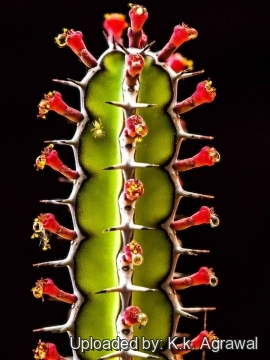 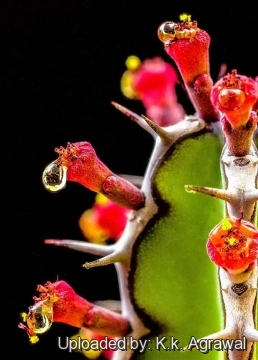 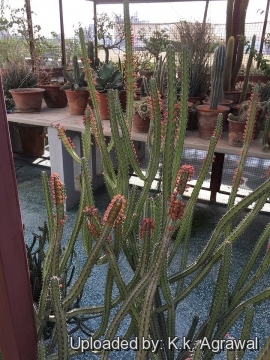 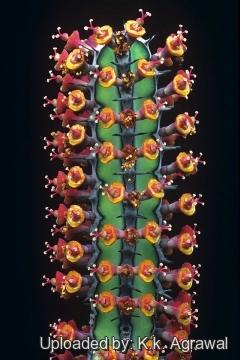 Female flowers (note the withered male cyathium in the center of each couple of female cyathia) Photo by: K.k. Agrawal 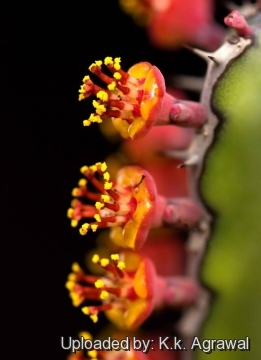 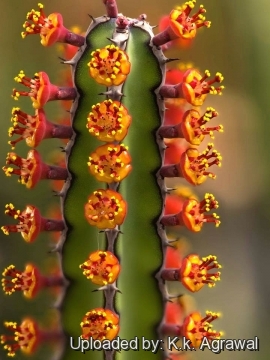 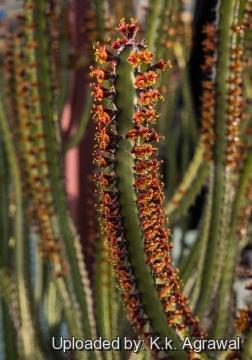 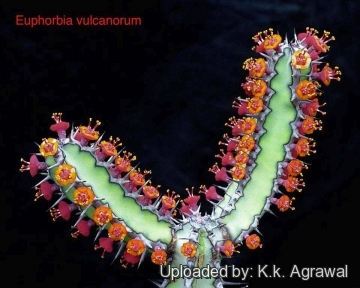 Cultivation and Propagation: Euphorbia vulcanorum is an attractive and easily grown species that tolerate neglect, although infrequently encountered in cultivation. It has short spines, but not really a concern.
Growth rate: It has a relatively rapid seasonally growth.
Soil and pots: It likes pots with generous drain holes, needs a very airy potting medium which mainly consists of non organic material such us clay, pumice, lava grit, and only a little peat or leaf-mould. Re-pot every two years.
Fertilization: Need a perfect fertilizer diet in summer. Use preferably a cacti and succulents fertilizer with high potassium content including all micro nutrients and trace elements or slow release fertilizer.
Exposure: This plant has an excellent heat tolerance, and need full sun to light shade exposures, but can tolerate shade. However shade grown plants will tend to produce fewer, and badly etiolated growth (weak, gangly stems with unusually long internodes, and generally paler green coloration). The colour of this plant is much more marked if grown in full sun. But if it is possible to keep the growth of this species compact, with denser, shorter stems of a more uniform length (rather than looking weedy) such plants can be outright attractive.
Watering: Water regularly during the active growing season. No water should ever be allowed to stand around the roots. Keep almost completely dry in winter. Even though it is extremely drought tolerant, during the active growing season it is best to keep its soil reasonably moist, watering it about once every week.
Hardiness: Tender. This spurge is difficult to get it to look its best without a good amount of heat and sun and so it is only really suited to the tropics (USDA Zones 10-11). Keep the plant cooler at in winter, but maintain the light as bright as you can so that any growth which it may produce at this time will not be etiolated. It can be grown outdoors in the summer months to benefit from direct exposure to light, and especially exposure to high summer temperatures.
Rot: Rot it is only a minor problem with Euphorbias if the plants are watered and “aired” correctly. If they are not, fungicides won't help all that much.
Known hazards: The latex/sap is poisonous and can cause skin rash, itching and general discomfort, and they should be handled with caution, particularly when pruning.
Propagation: The plant can be reproduced by seeds or cuttings. The seed will loose viability in storage, and may not be viable the following year, so the seed should be planted as soon after harvesting as possible. Germination usually occurs within about a week or two. If you remove an offset, remember to let it dry for some days, letting the wound heal (cuttings planted too soon easily rot before they can grow roots). Lay it on the soil and insert the stem end partially into the substrate. Try to keep the cutting somewhat upright so that the roots are able to grow downward. It is better to wash the cut to remove the latex.