Origin and Habitat: Euphorbia greenwayi subsp. greenwayi is known from a single location in the Iringa Escarpment, Tanzania. Estimated area of occupancy (AOO) 3 km2
Type locality: Iringa District: Iringa Escarpment f 65 km. N. of Iringa on Dodoma road.
Altitude range: 1000-1250 metres above sea level.
Habitat: Miombo woodland. This species grows in rocky outcrops with Brachystegia open woodland. The habitat quality is declining due to harvesting of woodland products near Iringa town: firewood, charcoal (which impacts the whole habitat) and the digging up of plants. Due to single location and ongoing threat, this taxon is assessed as Critically Endangered.

Subspecies, varieties, forms and cultivars of plants belonging to the Euphorbia greenwayi group 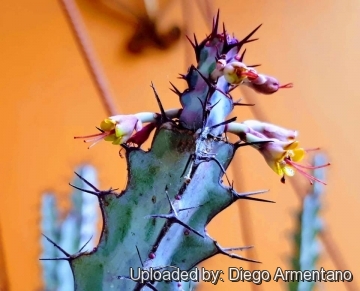 Euphorbia greenwayi Photo by: Diego Armentano
Send a photo of this plant.

The gallery now contains thousands of pictures, however it is possible to do even more. We are, of course, seeking photos of species not yet shown in the gallery but not only that, we are also looking for better pictures than those already present. Read More...
Cite this page: "Euphorbia greenwayi" Text available under a CC-BY-SA Creative Commons Attribution License. www.llifle.com 14 Nov. 2005. 10 Aug 2020. </Encyclopedia/SUCCULENTS/Family/Euphorbiaceae/35284/Euphorbia_greenwayi>