Origin and Habitat: Adenia olaboensis is widely distributed in central and western Madagascar but has a fragmented distribution. It is found in provinces of Mahajanga in the north-west, Toliara in the south-west and Fianarantsoa in the south-east. Recorded in the district of Betioky at Ampandrandava, north of Belosur Tsiribihina and at Antsalova. The species is locally common.
Altitude range: This species occurs to 1000 m, possibly 1500 m.
Habitat and ecology: A. olaboensis grows on a wide range of substrates, including both calcareous soils and sandstones, underneath shrubs, in dry secondary deciduous forests, and grassy savanna. This species is predominantly bird pollinated by the Souimanga Sunbird and Common Jery. The majority of pollination occurs in the early hours of the morning, coinciding with high rates of nectar secretions and likelihood of flower opening. Natural habitats in Madagascar in general are affected by fire, charcoal and fuelwood extraction, over-grazing and conversion to agriculture. It is not known to what extent these affect this species. It occurs sympatrically with the close relative Adenia firigalavensis. It is in some demand internationally as a horticultural plant, grown chiefly by specialist collectors of succulents. It is cultivated locally and is recorded as exported in relatively small numbers, almost certainly as wild plants, for the international horticultural trade. It reaches a considerable size, and large mature specimens are highly unlikely to be collected for export. De Wilde (1971) recognizes Adenia olaboensis var. parva de Wilde distinguished by smaller, orbicular to reniform leaves. This variety is distributed in the southwest.

Description: Adenia olaboensis is a large vine with conical stem bulging at base, up to 2 m. It is one of around 100 species in Adenia, a genus that is widespread in Africa and Madagascar, of which around 18 species are endemic to Madagascar. Adenia olaboensis is a very decorative species worthy of cultivation. The stem surface somewhat resembles crocodile skin and the species is called by the Sakalava tribe "olaboay", meaning the crocodile.
Stem: It has a generally rather horizontal, trailing, main stem that may reach a length of around four metres, the base of which is conical and bulging, for up to 2 m with a diameter of 40 cm and has characteristic vertical ribs. Secondary trunks and lianas grows from the primary trunk and may grow to a diameter of 12 cm and for a lengths of several metres. The larger vines have the same rib-pattern as the trunk.
Leaves: Simple, heart-shaped, 7 cm x 6 cm, thick, green above, and pale greenish below.
Flowers: Yellow.
Similar species: The species resembles A. firingalavensis.

Subspecies, varieties, forms and cultivars of plants belonging to the Adenia olaboensis group 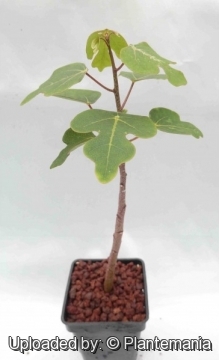 Adenia olaboensis Photo by: © Plantemania
Send a photo of this plant.

The gallery now contains thousands of pictures, however it is possible to do even more. We are, of course, seeking photos of species not yet shown in the gallery but not only that, we are also looking for better pictures than those already present. Read More...
Cite this page: "Adenia olaboensis" Text available under a CC-BY-SA Creative Commons Attribution License. www.llifle.com 14 Nov. 2005. 07 Jul 2020. </Encyclopedia/SUCCULENTS/Family/Passifloraceae/34377/Adenia_olaboensis>