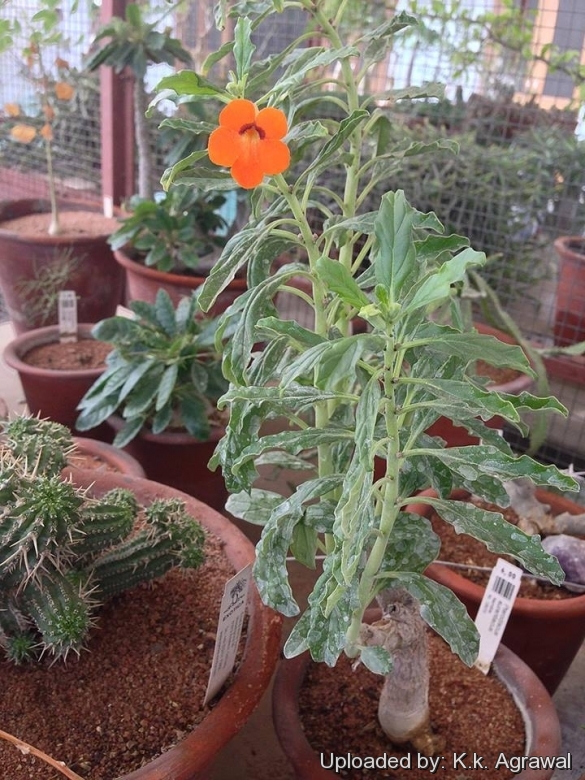 Description: Pterodiscus aurantiacus is a perennial succulent herb, up to 30 cm high, that grows from a large underground beet-like caudex. Its elongated, slightly succulent leaves are covered with mucilaginous hairs. Solitary flowers with orange-red to vermilion corollas are borne in the leaf axils. The specific name refers to the flower colour. The indehiscent fruit is four-winged and often has a violet hue.
Rootstock (caudex): The caudex (comprising the short bulbous basal part of the trunk and the upper part of the oblong tuberous root of about the same diameter) is subterranean or partly projecting above the soil to about 25 cm high and irregularly shaped. This succulent caudex ensures the survival of the plants during the dry season. The lower subterranean part of the caudex is always succulent and may form a large tuber, often bearing some lateral roots that are also swollen.Occasionally the upper part of the caudex may be branched.
Annual stems: 1 to several, usually unbranched, short, thickish, somewhat fleshy mostly unliginified, only rarely slightly lignilied, erect or ascending, often more or less decumbent, to 30 cm long. It shoots later in the season. The annual shoots usually disintegrate at the end of the season and decay.
Leaves: Elongate-lanceolate, up to 8 cm long and 2 cm broad, subentire, wavy-edged with slight indentations, usually with 4 pairs of lateral vein, bluish-green. Shape and size of the leaves are greatly influenced by the position of a given leaf within the leaf sequence of a season (the first leaves generally are much smaller). The shape is also influenced by environmental conditions, especially by the amount of available water.
Flower: Single, axillary, vivid orange, with dark red blotch in throat; corolla tube cylindrical, 16–20 mm. Long. Diameter of limb at least three times the diameter of the throat, lower lobe enlarged, enlarged, nearly circular.
Fruit: Coriaceous, usually transversely elliptic in lateral view, up to 35 mm long and 41 mm broad, strongly laterally compressed, indehiscent, often suffused with purple when ripe. Beak very narrow, almost needle-like; the pergamentaceous wings longitudinally arranged in pairs in the median plane of either side of the fruit to 12 mm broad, contiguous or even overlapping at the base of the fruit. The fruit has two locules, each of which 1-2 seeds. The ripe fruits become detached and are blown around by the wind, rolling on the ground like wheels.
Seeds: Oblong with a smooth testa.
Similar species: Pterodiscus aurantiacus is similar to Pterodiscus ngamicus in general appearance but the latter is generally somewhat larger and the flowers are maroon with yellow spots inside. Also the fruits are similar (which has often led to misidentifications of non-flowering specimens). 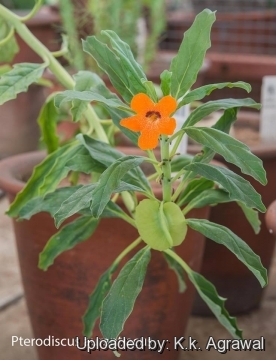 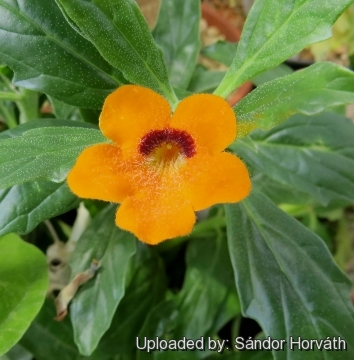 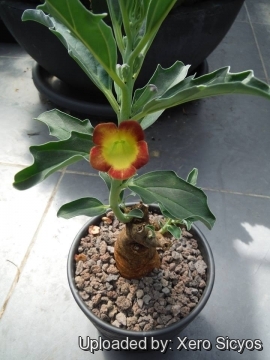 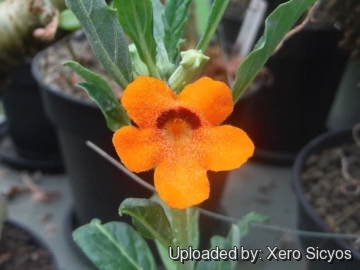 Cultivation and Propagation: Pterodiscus aurantiacus grows relatively easily and doesn't produce as many stems and leaves as other caudiciforms, making its management easier.
Growth rate: It grows well, though very slowly, but it possible to increase the speed of growth to some extent by providing adequate amount of water, warmth, and fertilizer during the active growing season, but it’s susceptible to rotting if too wet.
Potting medium: Since roots are quite succulent, use a slightly acidic cactus mix or add extra perlite, vulcanite or pumice to regular soil potting soil. A gritty, very free-draining compost is suitable, and clay pots help the plants to dry out between watering. It like pots with generous drain hole, re-pot every 2 years.
Frost tolerance: Due to its African origin keep warm in winter, the minimum safe average temperature is 5°C, although it can go lower for short periods. It can be grown outdoors in frost-free climates, need anyway to kept above 0°C and dry in winter.
Exposition: It likes a sunny position, but avoid direct blasting sun in summer. Keep the caudex in the shade.
Watering: It should be watered regularly when it begins to produce leaves in spring/summer and kept drier in Winter. Like most caudiciform it likes lots of water during warm and hot weather, and is accustomed to growing under other plants. Make sure after watering, that the soil is actually wet. Many potting soil mixes will have only the surface wet, with water running down the outside of the root ball, and most of the soil dry. Run your finger into the soil 15 minutes after watering to check. Too high or too low temperature will induce dormancy.
Traditional uses:** The Bergdamara use the root for difficult labour. The Nama take a root decoction for menstrual problems, abnormal bleeding and retained placenta.
Maintenance: Repot every two years.
Propagation:*** Seeds.