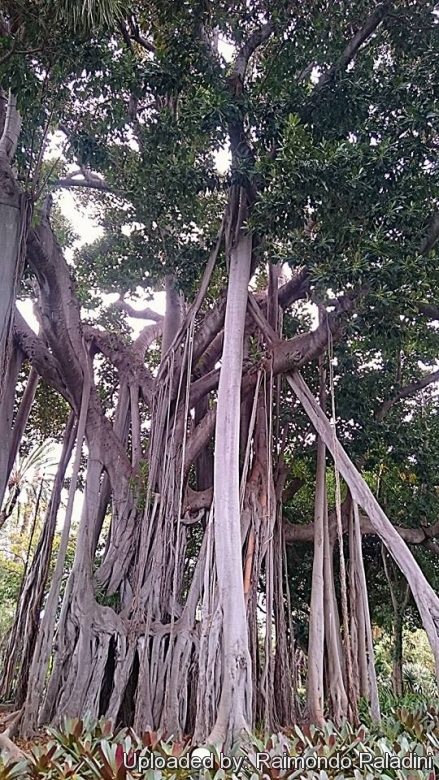 Origin and Habitat: Ficus macrophylla is native of most of the eastern coast of Australia, from the Atherton Tableland (17° S) in the north to the Illawarra (34° S) in New South Wales, and Lord Howe Island .This species is widely used as a feature tree in public parks and gardens in warmer climates such as California, Portugal, Italy (Sicily, Sardinia and Liguria), Hawaii, northern New Zealand (Auckland), and Australia. The size and vigour of this fig in New Zealand, and its lack of natural enemies, as well as its immunity to possum browsing, indicate that it may be able to invade forest and other native plant communities.
Altitude range: Sea level to 300 m altitude.
Habitat and ecology: It is found in subtropical, warm temperate rainforests and dry rainforest, where, as an emergent tree, its crown may tower above the canopy, particularly along watercourses on alluvial soils in areas with an average yearly rainfall of 1,200–1,800 mm. The soils it grows on are high in nutrients.Ficus macrophylla is a strangler fig, seed germination usually takes place in the canopy of a host tree and the seedling lives as an epiphyte until its roots establish contact with the ground. It then enlarges and strangles its host, eventually becoming a free-standing tree by itself. Like all figs, it has an obligate mutualism with fig wasps; figs are only pollinated by fig wasps, and fig wasps can only reproduce in fig flowers. Many species of bird, including pigeons, parrots and various passerines, eat the fruit. It often grows with trees such as white booyong (Argyrodendron trifoliolatum), giant stinging tree (Dendrocnide excelsa), lacebark (Brachychiton discolor), red cedar (Toona ciliata), hoop pine (Araucaria cunninghamii), green-leaved fig (Ficus watkinsiana) and Cryptocarya obovata.

Description: Ficus macrophylla is a large evergreen banyan tree known for its imposing buttress roots. The characteristic "melting" appearance of this fig is due to its habit of dropping aerial roots from its branches, which upon reaching the ground, thicken into supplementary trunks which help to support the weight of its crown. In habitat F. macrophylla more often grows in the form of an epiphytic strangler vine than that of a tree. When its seeds land in the branch of a host tree it sends aerial, "strangler" roots down the host trunk, eventually killing the host and standing alone. The large leathery, dark green leaves are 15–30 cm long. These trees are, on average, 20 to 35 metres tall and 40 metres wide, but old specimens can reach tremendous size and may reach 60 m in height. The leaves and branches bleed a milky sap if cut or broken.
Derivation of specific name: The specific epithet macrophylla is derived from the Ancient Greek makro "large" and phyllon "leaf", and refers to the size of the leaves.
Stem: The trunk can be massive, with thick, prominent buttressing, and reach a diameter of 2.4 m. The rough bark is grey-brown, and marked with various blemishes. The wood is soft, light and has a wavy texture with aerial roots (some becoming props).
Roots: This species has an extensive surface root system.
Leaves: Large, arranged alternately on the stems, elliptic or ovate, 15–25(-30) cm long, 7.5-12 cm broad, rounded or cuneate at the base, margins entire, apex obtuse-acute, leathery, hairless, mid- to dark-green and glossy above, distinct lateral nerves 10-20 pairs, parallel, intercostals present, paler, silvery-green to rusty-dotted beneath. Petiole 2–10 cm long. Leaf buds enclosed in showy rose-colored sheaths (stipules), 3 to 10 cm long, finely hairy to glabrous which soon fall.
Inflorescences: The inflorescence or hypanthodium is a specialized inflorescence where the flowers are formed on the surface of an expanded peduncle tip (receptacle) that is folded to enclose the flowers. They are produced in an axillary group of 34, on short, thick peduncles globular or pyriform, 1.5-2 cm in diameter, subtended by 3 basal bracts. F. macrophylla is monoecious: each tree bears functional male and female flowers.
Male flowers: Mixed with female; sepals 3; stamen solitary.
Female flowers: sepals 4-5; ovary ovoid, style lateral, stigma elongate-acute.
Fruits (fig): Small (2–2.5 cm in diameter), ovoid or pyriform-globular and greenish, ripening and turning purple with lighter spots at any time of year. Stalk 10–20 mm long. They are produced only on mature trees in the open, usually in pairs. Although edible, they are unpalatable and dry.
Seeds: Minute.

Subspecies, varieties, forms and cultivars of plants belonging to the Ficus macrophylla group 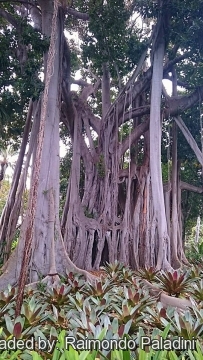 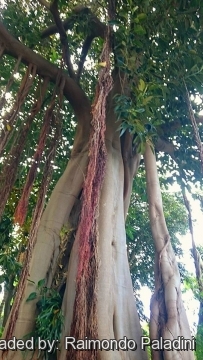 Cultivation and Propagation: The huge size of Ficus macrophylla precludes use in gardens, and its roots are highly invasive and can damage piping and disrupt footpaths and roadways. Its aggressive root system allows its use in only the largest private gardens. The vast quantities of crushed fruit can be messy on the ground.
Ficus macrophylla can withstand light frosts (can endure cooler climates than other fig species) and can cope with salt-laden spray in coastal situations, and their fruit is beneficial for urban wildlife.
Traditional uses: Aboriginal people traditionally used the fibres for fishing nets.