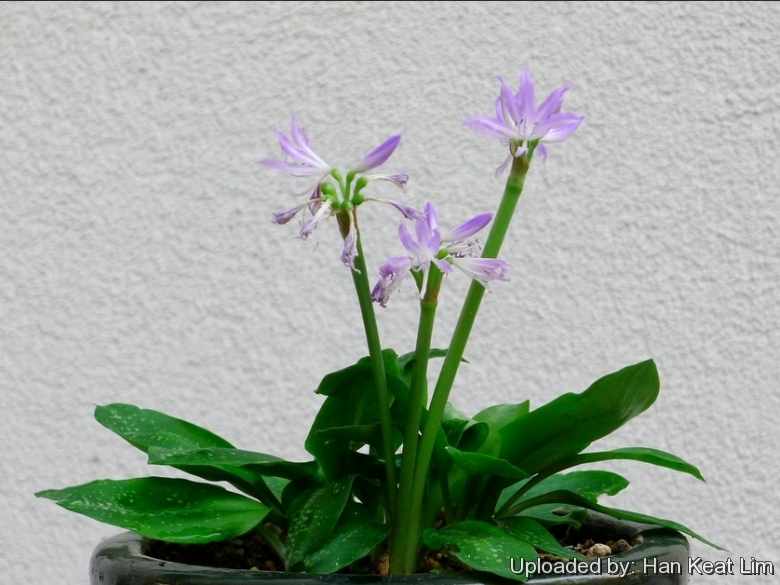 Origin and Habitat: Minas Gerias, Brazil.
Habitat and ecology: Griffinia liboniana grows in the lush, wet understory of tropical, Atlantic rainforests of Brazil. The plant is critically endangered in the wild due to deforestation, so it is facing extinction.

Description: Griffinia liboniana is a beautiful small evergreen, bulb species with quite peculiar narrow oblong flaccid leaves which much resemble those of a Drimia being mottled with pallid blotches upon a dark green ground. Griffinia liboniana is closely related to the rare Worsleya procera, the legendary "blue Amaryllis", its truly exquisite blooms are almost a miniature version of it. Blue coloured flowers are rarely found in the Amaryllidaceae.
Bulb: Bulb only 2.5-5 cm across and 7-33 cm long.
Leaves: Very shortly-petiolate, oblong-acute with white spotting on the blade, this varies from light and diffuse to quite well defined.
Inflorescences: The scape is about 15-40 cm high (short is the norm) and round with about six to nine flowers.
Flowers: Small pale lilac-blue, pale ultramarine or bluish-purple blending with very narrow segments dark at the petal tips toning gradually to near white on the lower half in the centre. Stamens very short and declinate. It is noticeable for having the upper stamen suppressed.
Blooming season: The plants tend to flower multiple times per year (mainly in spring), not just once like many Amaryllis relatives.
Note: Griffinia liboniana is a controversial species known since as long ago as 1845, when it was found in the state of Minas Gerais and described by Morren with an accompanying illustration. Lemaire (1853) published another "more accurate" interpretation. The two plates vary considerably in the floral form and colour and may represent the natural variation found in G. liboniana.

Griffinia liboniana Photo by: Han Keat Lim
Send a photo of this plant.

Cultivation and Propagation: Griffinia liboniana grows very well in a pot in a well-drained medium; it loves warmth, shade and humidity. The bulbs should bloom once they get established. Even without flowers, it sparkles with its gorgeous spotted leaves. Unlike Worsleya procera, it is very easy to grow. The plant occasionally goes semi-dormant for a month or two, before bursting forth with its wonderfully spotted leaves. It grows great indoors as a houseplant.
Soil: It needs a free draining soil, rich in organic mater such a bark chips and pieces, coir, wood mosses and inert porous material such as pumice, charcoal, perlite or coarse sand, and keep it moist and quite warm. This species can be kept in small pots (10-15 cm pots).
Light requirements: In the wild, it grows under dense forest cover, so it is happiest in filtered light/bright shade. Shade is essential for Griffinia, they do not like direct sunshine.
Water requirements: Keep evenly moist (but not soggy) during growing season, reduce water in the winter. It will also go dormant if left unwatered. Over about 40% humidity is recommended.
Fertilization: Feed it like a typical houseplant
Temperature requirements: The ideal temperatures would be between 15 - 33 degrees Celcius, but it can even withstand temps less than 10 degrees (forcing it to go dormant). When dormant in winter the ideal temperatures should be kept over 15°C. The plant may occasionally withstand temperatures less than 0° C for a short time if dry, but it is best to protect it from temperatures near freezing.
Propagation: Griffinia multiplies readily with bulblets, which you may separate.