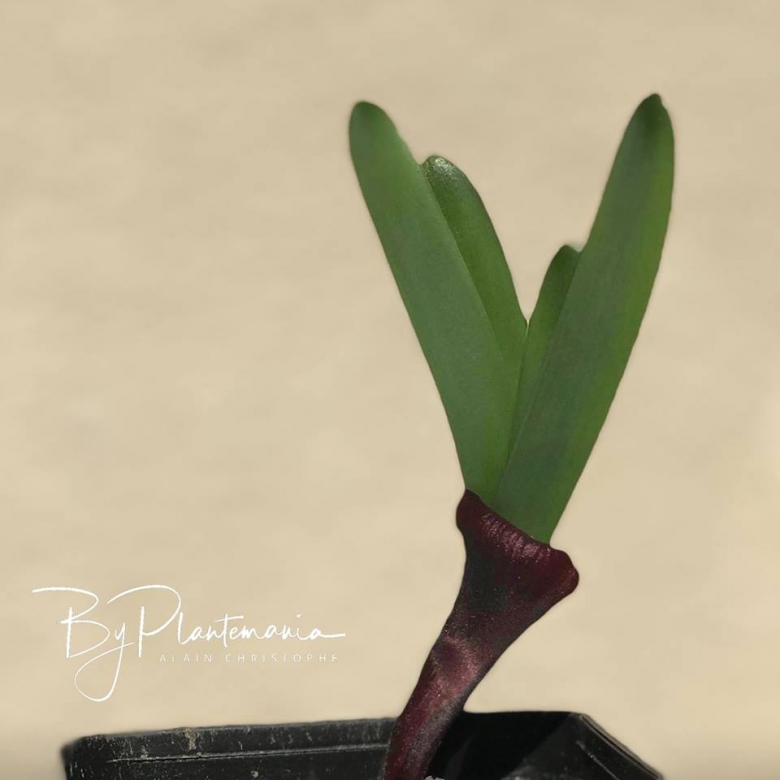 Origin and Habitat: Western parts of the Northern Cape & Western Cape, South Africa.
Habitat and ecology: Strumaria truncata is a winter-growing geophyte that usually grows on south-facing slopes of rocky outcrops, in sandy or clay soils. Good early rains trigger the mass flowering of this species. After flowering and seed production is complete the bulb goes to sleep for the summer but reliably returns in the autumn to invigorate the winter landscape.

Description: Strumaria truncata is a small bulbous plant with up to 6 erect leaves which stand in a fan and are slightly twisted at the ends. The bright white to light pink flowers are produced on a long slender stem and are usually hanging downwards. It is unusual in having a prominent, inflated, liver-coloured sheath (known as a cataphyll in botanical terms) which often precedes and protects the young foliage. Strumaria truncata is the only species in the genus that produces this curious aerial sheath. The funnel-shaped flowers are white or in shades of pink, and have conspicuously protruding, long stamens.
Bulb: Globose, 2.5 cm in diameter, with a long neck and covered by several layers of pale brown outer tunics produced 2.5 cm over its top.
Leaves: 3–6, erect, lorate to linear sword shaped, flat, usually spirally twisted, obtusely rounded at the tip, about 15 cm long, 8-12 mm broad, enclosed at the base in a funnel-shaped, truncate, membranous, brown sheath (cataphyll), about 5 cm long, 8-12 mm in diameter at the throat.
Inflorescence (umbel): Peduncle slender, compressed, about 30 cm long with the flowers hanging downwards. Pedicels 25-40 mm long; spathe-valves cuspidate, greenish, shorter than the pedicels.
Flowers: 6–15, inodorous. Corolla funnel-shaped, bright white, but also in shades of pink depending on the wild locality. Perianth-segments oblanceolate, plane, pinkish, 8-12 mm long. Stamens distinctly exserted (longer than the corolla), shortly connate (joined to one another), three adhering to the style towards the base; anthers 1 mm long; style as long as the stamens, dilated towards the base. The flowering period is Autimn (April to June in the Southern Hemisphere), and individual flowers are quite long-lasting, remaining attractive for about ten to twelve days.
Fruits and seeds: During the fruiting period, the flower stalks lengthen and become erect, and produce a capsule that contains bright green or dull reddish-brown, round fleshy seeds which drop to the ground once they are ripe and begin to germinate almost immediately.

Cultivation and Propagation: Strumaria truncata is a nice bulbous plant, little known and unusual in cultivation. It is best grown as a container subject as its bulbs must be kept absolutely dry during the summer dormant time, and cannot survive garden irrigation during this period.
Soil: Use a very well drained mix of equal parts of coarse river sand and industrial sand (swimming pool sand), with a layer of fine, well-decomposed compost placed at the bottom of the pot.
Watering: The bulbs are planted in early autumn after which they should be given a good watering, and then not again until the flower buds and leaves begin to appear, whereafter they can be watered well every two weeks. Towards the end of spring, as temperatures rise, the leaves will begin to yellow, and watering must then cease completely to allow the soil medium to dry out.
Propagation: Seed, as offsets form rather slowly, if at all. Sow the seeds in the same medium for cultivating bulbs. Sprinkle them evenly and thinly over the soil medium and then cover them with about 3 mm of the medium. Water well with a fine rose and place in a protected position with good air circulation and which receives morning sun. Once the seeds have germinated and produced their first leaves (within 10-12 days), water them well every two weeks. Seedlings generally flower for the first time during their third season, but under ideal conditions flowers may appear during the second year of growth [10].