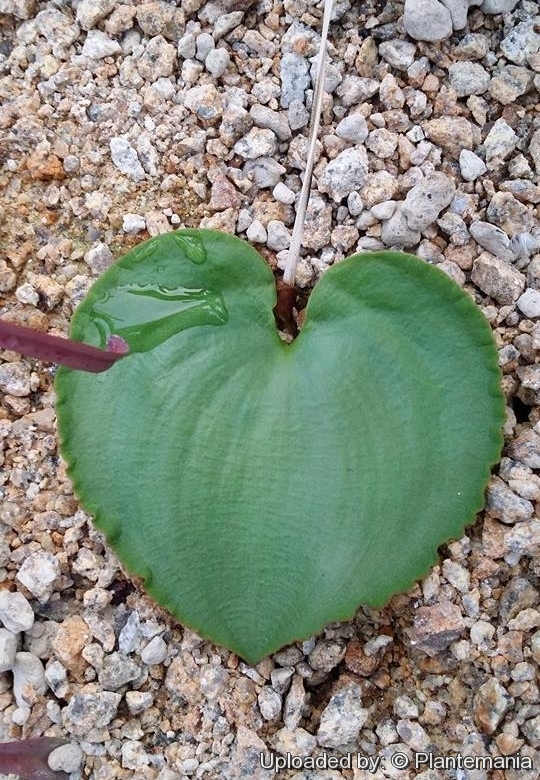 Origin and Habitat: Is a widespread geophytic herb, found in many places in southern Africa and Lesotho but may occur in Zimbabwe. In South Africa it is found in arid areas of the Karoo, Eastern Cape and the Orange Free State in a variety of habitats. It is particularly common on the slopes of the Drakensberg at altitudes up to 1 700 metres, but also occurs near the coast.
Habitat and ecology: Eriospermum cooperi is a summer rainfall species mainly found in rocky grassland and open scrub, but may also be found in lightly wooded areas under bushes, in pine plantations or in damp streamsides. It is also found in disturbed areas.

Description: Eriospermum cooperi is a tuberous and geophyte plant. In habitat, the tuber is always subterranean and can grow to seven centimeters in diameter. The inflorescence, a raceme (spike) of small white flowers can easily reach 50-80 cm. It is followed by a single leaf that sprouts from the tuber and lies flat on the ground. Blade broadly oval with a blunt tip. Considerable variation is shown in E. cooperi in hairiness, length of pedicels and other features.
Tuber. c. 6 cm in diameter. Flesh white.
Leaves: Usually solitary, distinctly stalked, developed at same time as after the flowers, prostrate (lying flat on the ground) or erect, cordate-ovate, with a long petiole. Quite glabrous or showing varying degrees of hairiness.
Inflorescence: Peduncle solitary, erect 30-80(-100) cm long appearing before the leave. Raceme (spike) short and very dense in the flowering stage; lower pedicels 3-4 (or more) mm long; bracts lanceolate-deltoid, nearly as long as the pedicels.
Flowers. White, creamy-white or pale green with perianth segments just joined at the base. Perianth campanulate, 4 mm long. Segments (tepals) oblong, obtuse. Three outer segments sometimes reddish brown on the back; inner white with a brown keel. Stamens shorter than the perianth; filaments lanceolate.
Fruits (capsules): Obconic, 6 mm long.
Seeds: The seeds are densely covered in long, brownish-white, silky hairs.
Similar species: E. cooperi is a close relative of Eriospermum brevipes, but it may be separated from that species by the larger tuber and the larger, normally glabrous peduncular bracts. Eriospermum schinzii is also difficult to distinguish, but the flesh colour of the tuber is white in E. cooperi and red in E. schinzii. Another species, Eriospermum porphyrium shows only slightly different but the tough, peeling skin of the tuber of E. porphyrium is a consistent character for separation from E. cooperi.

Subspecies, varieties, forms and cultivars of plants belonging to the Eriospermum cooperi group

Cultivation and Propagation: Eriospermum cooperi is a particular favourite of caudiciform plant enthusiasts. Cultivation of this plant is similar than winter-growing succulents, as othonna, tylecodon, conophytum, but it is not the easiest of all caudiciform. It is particularly prone to rot if left cold and damp while dormant. It is also a good companion plant for a rock garden if interplanted with grasses. Keep Dry in winter.
Growth rate: It is a slow growing species and tubers take many years to enlarge.
Caudex exposure: The remarkable tuberous rootstock (caudex) is usually raised above the soil line so that this can be seen and more readily appreciated.. For best results the tuber must be exposed only when the plants become mature enough, usually after several years of underground growth.
Soil and pots: It likes pots with generous drain holes, needs a very airy potting medium which mainly consists of non organic material such us clay, pumice, lava grit, and only a little peat or leaf-mould, seeing that the main trunk is planted with the majority of the roots below the caudex line. It's rare that it will use the upper third of its soil and often this area serves like a mulch or support for the stem.
Fertilization: Eriospermums seem to have modest needs for mineral nutrients; a few doses of balanced, water-soluble fertilizer at half-stength over the course growing season are sufficient.
Exposure: This plant has an excellent heat tolerance, and need full sun to light shade exposures, but can tolerate shade.
Watering: Water regularly during the active growing season. Eriospermum tubers are dormant during the summer, at which point their pots can be stored somewhere out of direct sun, and given only light waterings when the soil is bone dry. The plants starts to grow in our autumn season, when the day light begin to be short, they should be given deeper watering to encourage them to wake up.
Hardiness: Tender. This plant can be difficult to get it to look its best without a good amount of heat and sun. Keep the plant cooler at in winter, but maintain the light as bright as you can so that any growth which it may produce at this time will not be etiolated. It can be grown outdoors in the summer months to benefit from direct exposure to light, and especially exposure to high summer temperatures. Protection in a warm greenhouse, or even a garage for a month or two in the middle of the winter will greatly increase the survival rate.
Rot: Rot it is only a minor problem if the plants are watered and “aired” correctly. If they are not, fungicides won't help all that much. It is very unlikely to lose this plant from root rot from excessive water.
Maintenance: Re-pot every two years and trim off the dead 'arms'.
Propagation: The plant can be reproduced by seeds. The seed will loose viability in storage, and may not be viable the following year, so the seed should be planted as soon after harvesting as possible. Seeds are propagated without too much difficult. Fresh seed germinates rapidly and completely if sown just beneath the soil surface and kept moist. Plant in early autumn in shade and light place, new plants will sow in one-two weeks. Seedlings need to be kept consistently moist, but not saturated, for their first season, given dilute fertilizer every few weeks, and be exposed to as much light and fresh air as adult plants need. Do not transplant before 2-3 years.