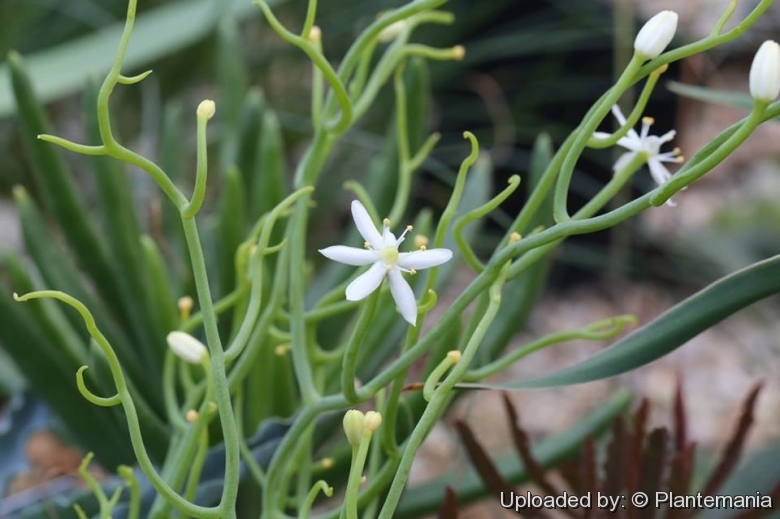 Bowiea gariepensis (Bowiea volubilis subs. gariepensis) Photo by: © Plantemania
This subspecies is different than ssp. volubilis because of the larger and more conspicuous white flowers, rambling habit, glaucescent foliage, brown tunic on the bulb and is a winter grower.

Origin and Habitat: Bowiea volubilis subs. gariepensis has a restricted distribution in the Western Cape, South Africa and Southern Namibia (from Skerpkrans in the west (Richtersveld National Park) to the Kakamas district in the east, along mountain ranges of the lower Orange River Valley)
Habitat and ecology: This species crowds cool, shady, moisture-retentive niches among huge boulders, mostly at the base of towering south-facing cliffs in the Orange River valley, in which habitat it may be locally very abundant, its glaucous-green stem/inflorescence scrambling down over the rocks. The climate in this region is arid and receives 50-200 mm of rain per annum, mainly in autumn, winter and spring. B. volubilis subs. gariepensis is a popular medicinal plant in RSA and wild populations are becoming very rare.

Description: Bowiea volubilis subs. gariepensis (= Bowiea gariepensis) is a curious perennial geophyte with has shallowly aboveground bulbs (occasionally exposed) from which a twining soft succulent stem arises annually, growing to a length of 1.2 m or longer. The latter is, in fact, a modified inflorescence which takes over the photosynthetic function of the leaves. It very much resembles the vegetative parts of Asparagus. It grows and flowers in autumn and winter. Once the inflorescence disappears the bulbs are difficult to find although they are quite large, attaining a diameter of up to 14 cm. Bowiea volubilis subs. gariepensis is the rarest of the few members of this genus of bulbs with climbing inflorescenses
Derivation of specific name: Gariep - Great River, the original Nama name of the Orange River.
Roots: Fleshy, white, to 5 mm in diameter.
Bulbs: Depressed-globose to 14 cm in diameter, subterranean to almost fully exposed; exposed parts green; tunics thickly fleshy withering to paper-like.
Leaves: Only present in immature young plants, fleshy, linear-lanceolate, canaliculate, short-lived.
Stem (= Inflorescences): The stem (inflorescence) is annual to 1.2 m appears in autumn, and bears sweetly-scented star-shaped blooms from May to July. Annual to 1.2 m, scandent, twining or scrambling, much branched, softly succulent, glaucous to glaucous-green, branchlets subulate up to 7 cm long and 2 -5 mm thick. Bracts lanceolate, spurred, 3 - 5 mm long. Pedicels arched.
Flowers: 14 -23 mm in diameter 6-lobed, diurnal, scented. Tepals free to the base, 12 mm long, 3.5 mm wide, white, spreading, oblong to lanceolate, margins revolute towards base, apex subacute. Stamens 6, Filaments suberect. Ovary 3-chambered, broadly conical, light green, glutinous on the upper surface; Style terete, Stigma apical, 3-lobed.
Fruits (capsules): Globose, during winter, 4-6 mm in diameter, 3-locular erect capsules with emarginate valves, dehiscing longitudinally. The capsules remain on the inflorescence as it withers during late spring. The seeds are not released immediately after the fruits ripen, but are retained in the capsules until the dry inflorescence is disturbed. Each erect capsule contains several seeds.
Seeds: Black, 4-5 mm, angular-oblong, smooth and shiny.

Subspecies, varieties, forms and cultivars of plants belonging to the Bowiea volubilis group 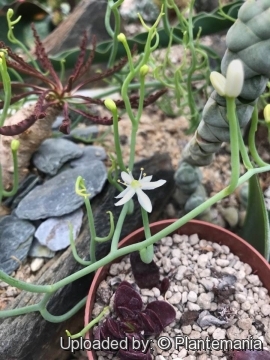