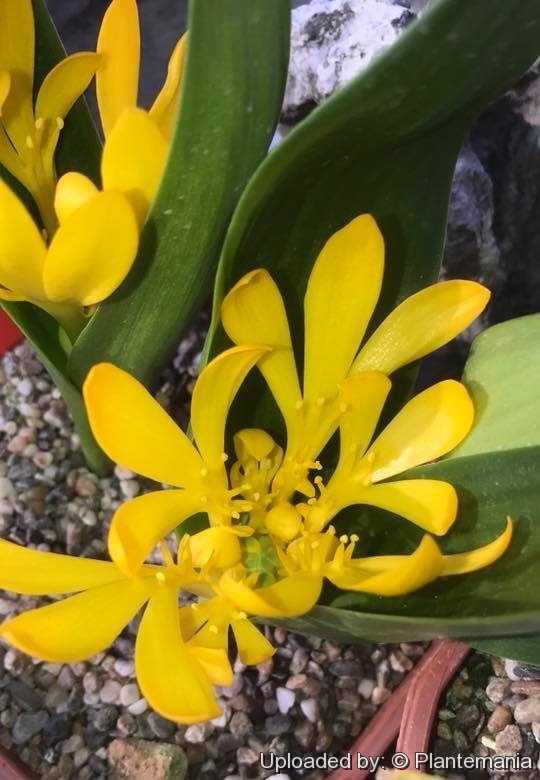 Daubenya aurea Photo by: © Plantemania
(Hyacinthaceae) It is a rare, winter-growing bulb. Its extraordinary flowers appear in spring and are instantly recognisable due to each of the outer flowers having one of its petals enlarged. It is thought that this arrangement gives the inflorescence the overall appearance of being the ray florets of a daisy - and this attracts the monkey beetles that pollinate them. The flowers are either bright red or bright yellow, the two colours occurring in separate colonies.

Origin and Habitat: Daubenya aurea is range-restricted species found only high in the Roggeveld Mountains, in suitable habitats between Sutherland and Middelpos in the Northern Cape Province of South Africa.
Altitude range: Around 500 metres above sea level.
Habitat and ecology: Fynbos, Succulent Karoo. This species grows on flat, low-lying dolerite-derived red clay soils, which can become damp during the rainy season. D. aurea is frost tolerant and is often covered by snow in its natural environment. It appears that low temperatures induce better flowering. Rapid, recent expansion of cultivation of low-lying clay flats is severely threatening this species. The species is locally abundant in suitable habitat. D. aurea is pollinated by monkey beetles. The enlarged outer petals of the flowers give the inflorescence the overall appearance of a daisy, which attract these beetles. Although it has not been identified as a negative impact, field observations indicate that plants are subjected to heavy grazing and trampling. Populations are sympatric with Daubenya marginata in several of the localities but flower much later than that species. D. aurea occurs in two colour forms, the more common one a brilliant red and the other canary yellow. Populations are typically uniformly coloured, although red populations will often contain occasional yellow morphs, whereas yellow populations may include a few plants in which the tepals are flushed reddish at the tips.


Common Names include:
ENGLISH: Jewels of the desert

Description: Daubenya aurea is a flat-growing, bulbous geophyte up to 50 mm tall. It produces two spreading leaves up to 110 mm long and 60 mm wide, which are ovate and narrowing to a broad tip. The tubular flowers are produced in a low aggregate cluster between the two leaves and are of a fine golden yellow colour, orange or red, and nearly sessile. Outer flowers are irregular with three sub-equal spoon-shaped segments longer than the tube and three small spear-shaped inner segments. Whilst, the outer perianth segments are longer than the stamens, the stamens are longer than the inner flowers.
Derivation of specific name: The specific epithet, aureus, refers to the golden yellow flowering form of this species.
Bulb: 2-3.5 cm in diameter, usually deeply buried in the ground. Outer tunics leathery, dark brown, extending in a short, papery neck up to 1 cm long.
Leaves: 2, thin, rather fleshy, dark green ovate, oblong, or lanceolate, suberect to spreading, glabrous, 5-11(-14) cm long, 2-7.5 cm broad, many-ribbed, bases clasping peduncle for 5-50 mm.
Inflorescence: The inflorescence is a corymbose capitulum ( looking like a large flower in the genus Arctotis or Gazaniadue to the enlargement of the lower florets) about 7.5 cm in diameter held on a short peduncle up to 50 mm above the two leaves. Outer bracts several, large, greenish, oblong, membranous. Pedicels suberect, lowermost 5-10 long, uppermost up to 3 mm long.
Flowers: Bright yellow, orange or red, rarely flushed reddish at tips of tepals, more or less zygomorphic and bilabiate. Outer flowers zygomorphic very irregular, with three subequal oblong-spathulate segments longer than the tube and three small lanceolate inner segments; stamens half as long as the outer segments. Inner (upper) flowers weakly zygomorphic or actinomorphic with all the segments linear and shorter than the stamens. The flowers, unlike those of the other species in the genus, do not produce nectar and are also unscented or at most weakly
Blooming season: Daubenya aurea flowers in spring, mainly in late August to mid September, but has also been recorded flowering in July and August. The yellow populations consistently come into flower one or two weeks before the red but the fruits appear to take much longer to ripen.
Fruit (capsule): Oblong-ovoid, 3-angled, 15-20 x 7-10 mm, acute at apex. The prominent papery bracts that are characteristic of the species are particularly conspicuous in fruit, serving as sails that assist in the wind dispersal of the infructescences.
Seeds: Globular, rarely slightly ellipsoidal, c. 3 mm in diameter, glossy black.
Chromosome number: 2n = 32. 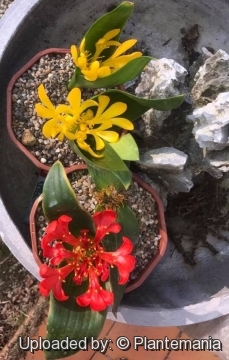 Daubenya aurea. Flowers are yellow in the typical form but red or orange in var. coccinea. Photo by: © Plantemania 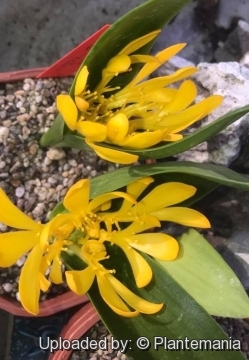 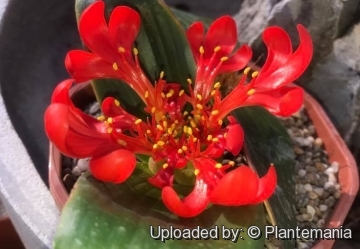 Daubenya aurea Photo by: © Plantemania
Send a photo of this plant.

The gallery now contains thousands of pictures, however it is possible to do even more. We are, of course, seeking photos of species not yet shown in the gallery but not only that, we are also looking for better pictures than those already present. Read More...
Cite this page: "Daubenya aurea" Text available under a CC-BY-SA Creative Commons Attribution License. www.llifle.com 14 Nov. 2005. 27 Oct 2021. </Encyclopedia/BULBS/Family/Hyacinthaceae/33674/Daubenya_aurea>