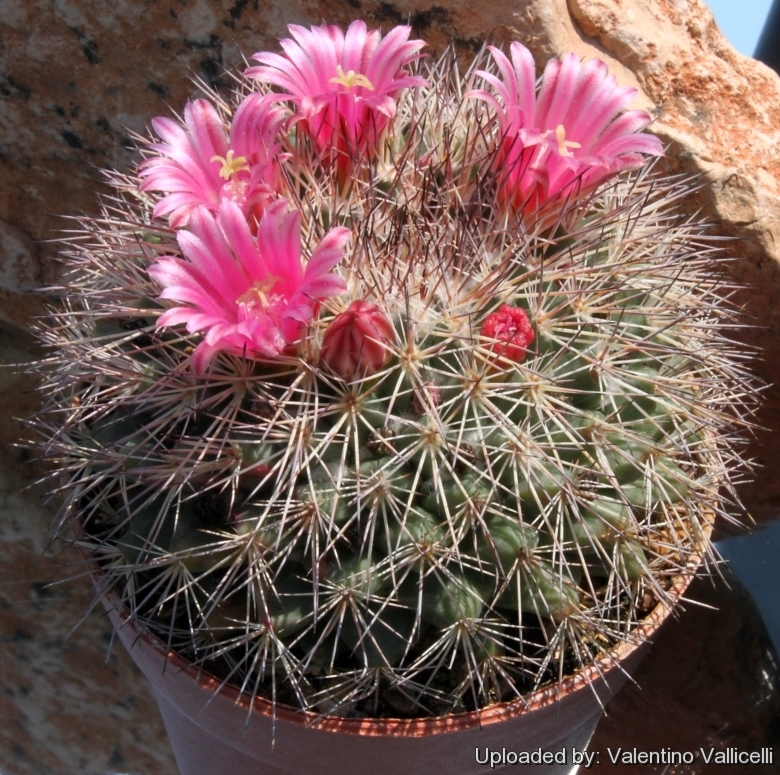 Origin and Habitat: Mammillaria grusonii is endemic to Mexico, where it can be found in the states of Coahuila (Sierra Bola, Cerro Bola, Viesca, Puerto de Ventanillas, San Pedro de las Colonias, Cuatrocienegas, Cerro Zavaleta, El Carmen, San Rafael, Pinaje de Leone, Pomona/Paile, La Pena, Tacubaya, Torreon - Cuencame, San Antonio, El Amparo, La Cuchilla), and Durango (Penon Blanco, Nazas - Rodeo, Belem, La Concha, Cuencame, San Bartolo, Cerro Visnaga, Lerdo, Santiago Papasquiaro). It may possibly occur in Sinaloa.
Altitude range: at about 800 - 1.850 m of altitude
Habitat and ecology: This cactus appears to occur in a variety of habitats, from xerophytic shrubland to grassland and woodland. It often grows on the top and slope of hills, or in flat areas on rocky limestone and on volcanic soils in the Sierra Madre. Mammillaria grusonii is a widespread species, and although it is not abundant or common, more as scattered individuals, there are no threats to cause any concern.

Description: Mammillaria grusonii is undoubtedly one of the largest species in the genus and usually solitary (it has a tendency to remain the same in the culture). It reveals its true beauty only as it becomes 6 -10 years old, and reaches 30 cm or more in diameter. This species shows a considerable variation in the spination, from quite short spines to very long, the latter named as Mammillaria tesopacensis var. papasquiarensis at one time.
Stems: globose to thick cylindrical, light blue-green, up to 30 cm and 25 cm in diameter.
Tubercles: Basally four-angled, carinate, without latex, the axil is woolly at first, later naked.
Radial spines: 12-14, straight, needle-like, upper ones shorter, 6-8 mm long, at first reddish, tipped brown, later grey or snowy- white.
Central spines: Usually 2 (or rarely 3), straight, stronger than the radial, one ascending, one descending, 4-6 mm long.
Flowers: Bell shaped, funnel-form, diurnal, light yellow-cream or pinkish with darker (brown or purple) midstripe with a yellowish throat, up to 25 mm long and in diameter.
Blooming season: Spring, and flowers remain open for about three or four days.
Fruits: Scarlet, club shaped.
Seeds: Brown.

Subspecies, varieties, forms and cultivars of plants belonging to the Mammillaria grusonii group 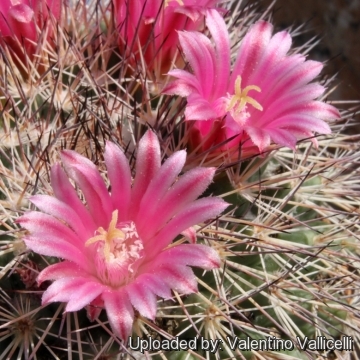 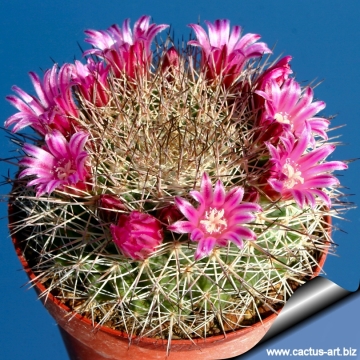 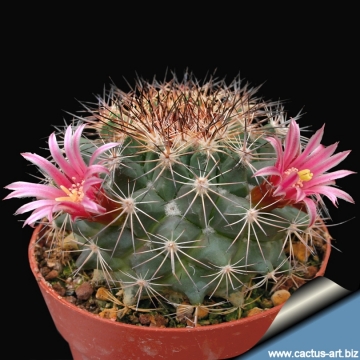 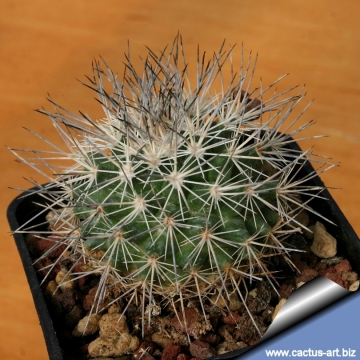 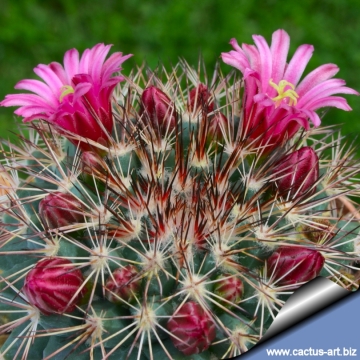 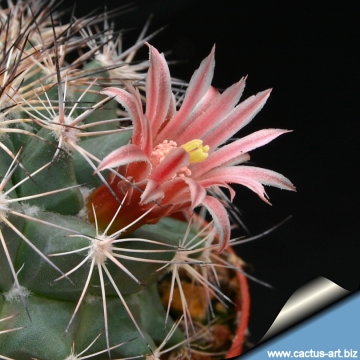 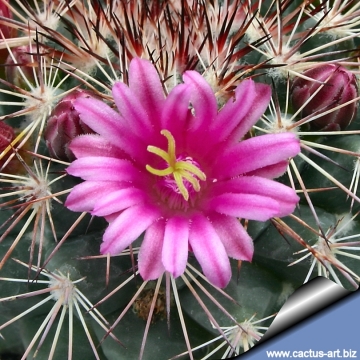 Mammillaria grusonii Photo by: Cactus Art
Send a photo of this plant.

Cultivation and Propagation: This plant blooms easily and needs lots of light. Use a pot with good drainage and a very porous mineral-based potting mix. Potted plants are quite wet-sensitive, especially in light of its small root system. Water sparingly during the growing season, let soil dry in between to prevent root rot, keep very dry in winter. Feed with a high potassium fertilizer in summer.
Usually it is recommended to over-winter this plant in a bright and warm greenhouse with at least 8-10° C , but it has proven to be quite frost resistant (if kept dry it is hardy as low as -7° C). A resting period in winter and strong light are necessary so that it can flower properly. Plants will offset readily, and dense clumps can be produced in a very few years.
Propagation: Through seeds and cuttings.