Subspecies, varieties, forms and cultivars of plants belonging to the Tephrocactus alexanderi group 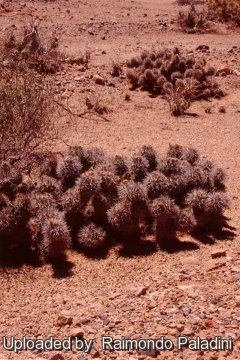 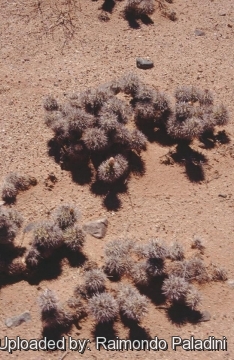 Cultivation and Propagation: Tephrocactus alexanderi var. bruchii is susceptible to overwatering, but need enough water during the growing season. This mountain cactus - because of the elongated fat taproot - necessitate deep pots and a well drained mineral potting mix. It prefers a full sun exposure, but should be protected from excessive heat and sun in summer.
Frost Tolerance: They tolerate light frost -5 (-10) °C.
Remarks: Need to be kept in a cool place during winter rest this is important for the flowers as well as for their health. Without this cool winter period they normally wont get many buds. Keep dry in winter to avoid rot. Need a sufficient amount of air.
Propagation: Seeds are extremely difficult to germinate. Best reproduced from rooted cuttings. Grafting is often used to speed growth rate and to create a back-up for plants in collection.