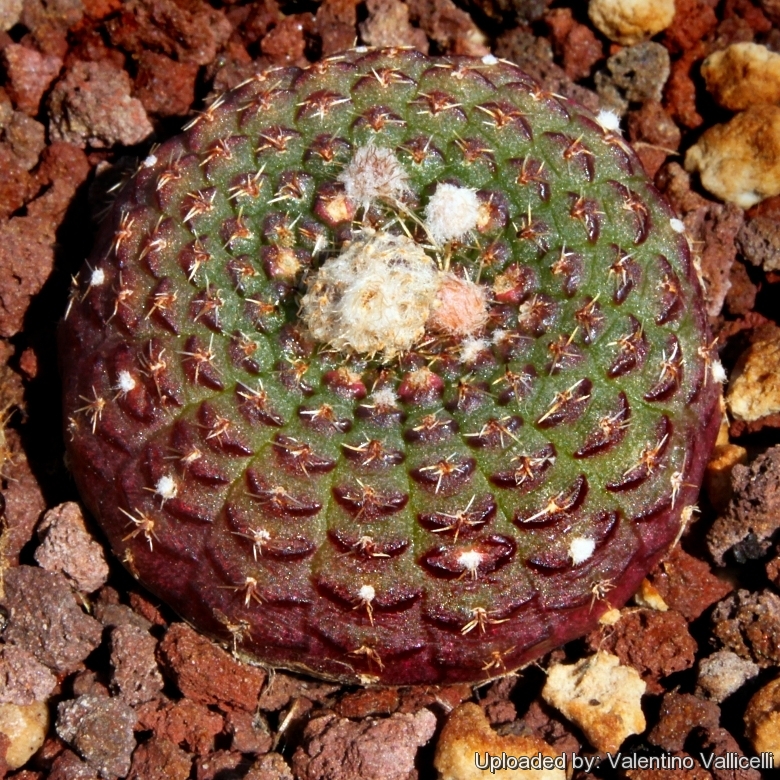 Astrophytum cataphractum (Frailea cataphracta) Photo by: Valentino Vallicelli
This species has 10 to 15 low and broad ribs. The tubercles are dull green and flatted above, with a purple-brown lunate (moon shaped), blots situated below the areoles.

Origin and Habitat: Cordilleras of Altos Paraguay, Paraguay and brazil (South America)
Habitat: Grows in fine sandy-loamy or fine grained but permeable soil often at the edge of sandstone plates. Forms dense colonies in all sizes with over than 200.000 plants. The vegetation consists of grass and small brushes, with no other cacti species present. Most of the Fraileas grow in half shadow under the grasses and brushes and only few are exposed to full sun. Climate is warm and humid. The rainfalls happen all around the year with a relatively high amount of over 1500 mm with much thaw during the night.

Description: Frailea cataphracta is a very small depressed cactus that do usually not sprout in nature, but in culture with age begins to clump around the base and grow oddly. It is undoubtedly one of the most fascinating cacti.
Stem: Dull-green and dark-brown or purplish, globose-flattened 1-2(-4) cm in diameter, deeply imbilicate at apex
Ribs: 10 to 15 with low and broad crescent-shaped tubercles flatted above, with a purple-brown lunate, blots situated below the areoles.
Radial spines: 5-9 straight 1-2 mm long, appressed, yellowish or whitish.
Central spines: Absent.
Flowers: Sulphur yellow from the top of the plant, sometimes larger than the plant itself (4cm diameter). But don't be disappointed when the easily produced buds fail to open. Fraileas are cleistogamous meaning that their flowers produce seed without even opening. Without the need for pollination, hence the buds rarely reach full bloom and remain closed. They will open only in great heat in the hottest, brightest, afternoon sun, if at all.
Fruits: Dry indehiscent with scales and bristles that detach easily, pericarp membranous, fragile that break easily releasing the seed.
Seeds: Comparatively large, black and shining, up to 2 mm wide, with a triangular, deeply concave face.
Remarks: Some of the most sought-after Fraileas are those with dark purple “moons” under their areoles. Frailea cataphracta is the most typical example, but remarkable dark “moons” are also found in several other species like: Frailea mammifera, Frailea klingleriana, Frailea buenekeri and Frailea schlosseri.

Subspecies, varieties, forms and cultivars of plants belonging to the Frailea cataphracta group

Notes: Seasonal growth and contraction. Frailea cataphracta, like many other diminutive cacti, such as, for instance, Turbinicarpus, Mammillaria, Rebutia, has a well-developed contractile tuberous root system. These tuberose roots have the function of storing enough sustenance so that plants can survive the periods of drought that they have to endure. Tuberous roots also have the function of anchoring the plants into the ground. The tuberose contractile roots continually pull the plants deeper into the ground as the stem elongates so the plants remain subterranean or at an appropriate level in the ground. Contractile roots are usually broad, fleshy, vertical, tapering, and very distinct of the fine absorbent roots and are capable of incredible effort. As commonly happens with tuberous-rooted cacti, in times of drought the plants lose water and shrink, the swollen root contracting and pulling the stem down, resulting in the top of the plant body lying level with, or some­times even below, ground level. In most cases, contractile roots not only produce a strong pulling force, but also push away the substratum and create a soil channel in which plant movement is made easier. The fleshy contractile roots swell with moisture in the wet season creating a space in the substrate then during the dry season they leave an empty space in the substratum that allow plant movement with minimum or no resistance, at the same time the root dehydrates and shrinks vertically, drawing the plant down into the ground. This is repeated early permitting the top of the plant to remain constantly at the soil level or even completely under the soil level, and frequently the flowers push up through the dirt from the underground cactus body. In fact, even though these plants show a good amount of new growth each year, they hardly get any larger, and their dimensions remain unvaried year after year, as the individual stems tend to contract at the base. The new growth produced during the vegetative season compacts considerably and retracts sometime, pulling the plant down completely under the soil in the hottest months of summer and coldest months of winter. It should be noted that "when specimens are in this withdrawn state, it becomes difficult to find them in their natural state, even though their exact locality is known" This is especially true of the disciform, flat-bodied Frailea species such as Frailea cataphracta, Frailea phaeodisca and Frailea castanea, which can be drawn completely below ground when dehydrated 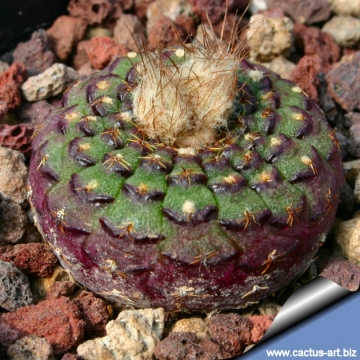 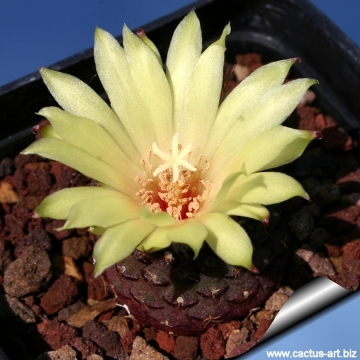 Flowers will open only in great heat on the hottest, brightest, sunny afternoon , if at all and are larger than the plant itself (Frailea cataphracta) Photo by: Cactus Art 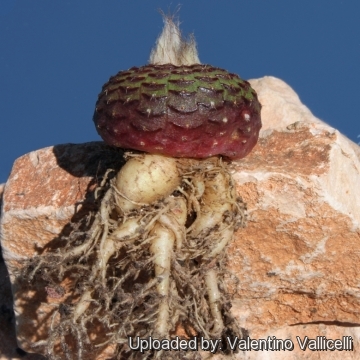 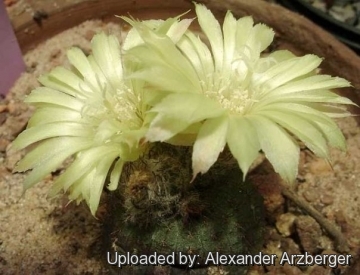 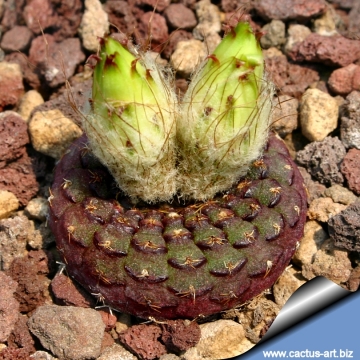 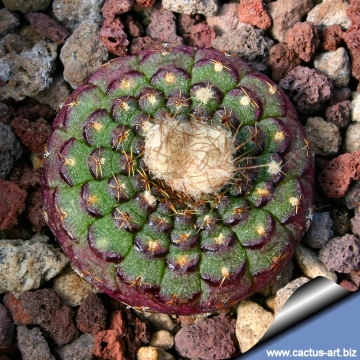 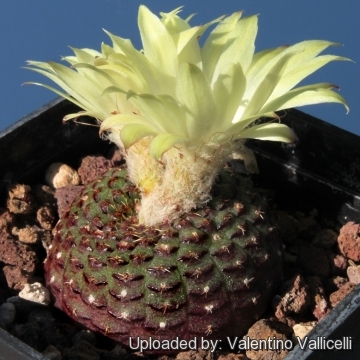 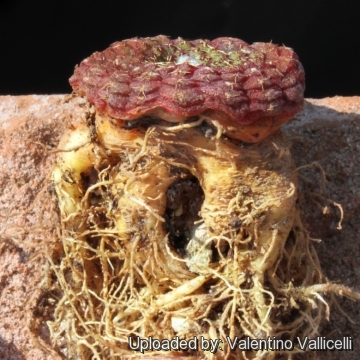 Cultivation and Propagation: Frailea cataphracta is a summer grower species relatively easy to grow. It is sometime seen as a grafted plant but grows very well on its own roots too. Characteristically, during the dry season plants retract completely under the ground both in the wild and in cultivation too.
Growth rate: Fraileas are relatively short-lived plants, only lasting few years (rarely more than 10-15 years in cultivation) and, possible annuals in habitat! In fact they reseed readily around the base of the mother plant from self-set seed if kept reasonably moist during warm weather. It is a
good idea to keep restarting them from seed; what looks like a healthy big plant may suddenly die of old age without warning.
Soil: Use mineral well permeable substratum with little organic matter (peat, humus), plants may become too elongated if compost is too rich.
Repotting: Re-pot every 2 years. Use pot with good drainage.
Fertilization: It grows much faster with a low nitrogen content fertilizer in spring and summer. Potassium helps maintaining the plants compact and healthy.
Watering: Requires careful watering to keep plant compact. Water sparingly from March till October, the thin, fibrous roots suffer if there is humidity, therefore the plant should be watered only when the surrounding terrain is dry. Keep dry as soon as the temperature starts dropping in October and keep it perfectly dry in winter at temperatures from 5 to 15 degrees centigrade.
Hardiness: They need a minimum temperature of 5-10° C (but occasionally temperatures of a few degrees below 0° are not dangerous if kept on the dry side prior to, and during, cold weather). It tends to rot in winter during the resting phase, if kept wet. In the rest period no high atmospheric humidity!!
Sun Exposure: Light shade to full sun, its colour tends to richer and darker when grown in light shade. In a shaded position the plants grow faster, but are not flat shaped and dark coloured.
Uses: It is an excellent plant for container growing. It always looks good and stays small.
Pests & diseases: It may be attractive to a variety of insects, but plants in good condition should be nearly pest-free, particularly if they are grown in a mineral potting-mix, with good exposure and ventilation. Nonetheless, there are several pests to watch for:
- Red spiders: Red spiders may be effectively rubbed up by watering the infested plants from above.
- Mealy bugs: Mealy bugs occasionally develop aerial into the new growth among the wool with disfiguring results, but the worst types develop underground on the roots and are invisible except by their effects.
- Scales: Scales are rarely a problem.
- Rot: Rot is only a minor problem with cacti if the plants are watered and “aired” correctly. If they are not, fungicides won't help all that much. To prevent rottenness it is also advisable to surround its root neck by very rough sand or grit, this help a fast water drainage.
Propagation: With fresh harvested seeds or (rarely) by grafting. Fraileas set seed (when well grown) and grow easily from seed. In fact, they are reported to set seed even if the flower doesn’t open. This self-fertilization is called cleistogamy. Seedlings dislike strong light and dry conditions and need to be repotted frequently during the first few years. However, old plants become senile and have a tendency to succumb to disease and a weak root system. At this stage, as is well known, they die suddenly. So, after they reach about 4-5 cm in diameter grow them slowly, and adopt a new repotting period, using intervals of every 3-4 years. Additionally grow them under drier conditions or with stronger sunlight. But plants are sometine grafted to accelerate growth, but the grafted plants are typical rather tall growing, compared with plants on their own roots that are usually more flat to the ground.