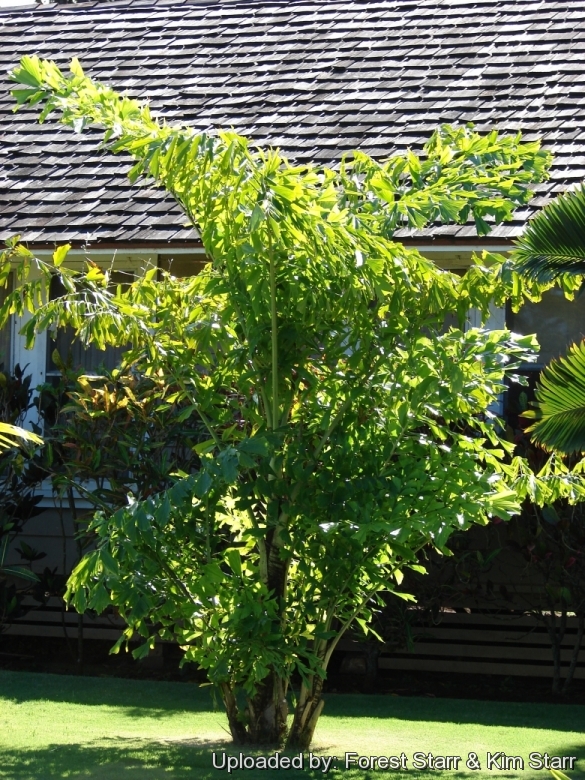 Origin and Habitat: India through to China, south-east Asia (Burma, Malaisia, indonesia) North Australia and Philippine Islands
Habitat: Tropical rainforests from where it grows as an understory plant in tropical rain forests.

Description: This is a clustering spineless palm, which can form a tightly packed clump 4-8(-10) metres high and 4 metres across at the top with a bush-like appearance. It is the most widely grown of the Caryota genus. It produces suckers freely.
Trunks: About 15 cm across, slender, light green/grayish colour with quite widely spaced leaf nodes.
Leaves: Light to dark green, bipinnate that can reach 3 m in length, with roughly triangular leaflets, flat, deeply indented and lobed that open rather like a fishes tail. The leaves don't abscis when spent, but they are easily removed due to the palms size. The leaves are inclined to burn in full blazing sun with low air humidity.
Inflorescence: Panicles that arise from within and below the leaves.
Flowers: Unisexual, pale cream, perfumed, in groups of 3 ( l female, 2 male), with 3 sepals and 3 petals. Like other species in the genus, as well as the related genera Arenga and Wallichia each trunk produces flowers for several seasons, starting from the top of the trunk and moving downwards, but then dies after its final seeding and should be removed. The clump will survive, however, and continue to produce more stems.
Fruit: Attractive reddish-orange to dark-red (or even bluish-black?) globular berry 1-2 cm long, tropical-looking fruit (in abundance). 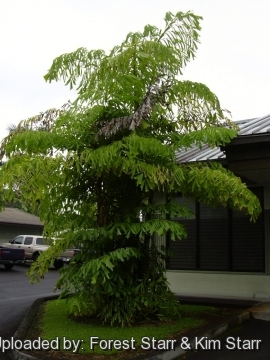 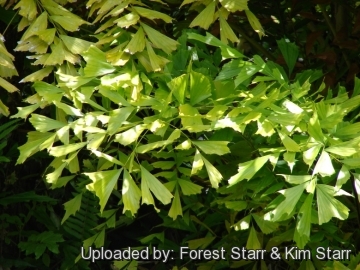 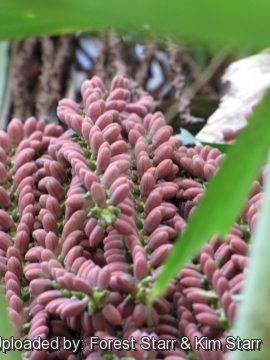 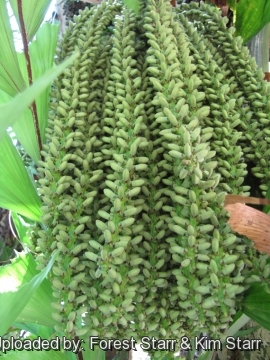 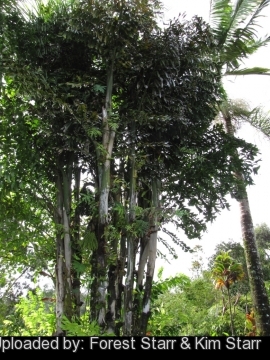 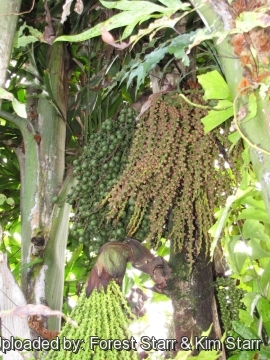 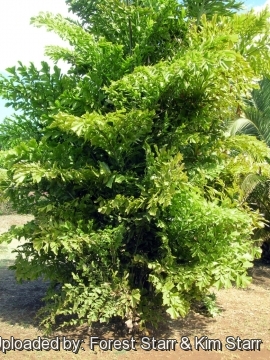 Cultivation and Propagation: It is a very useful and attractive plant for the gardener, easy to grow that features unusual leaf form, rapid, clustering growth, and a manageable height. It is a interior-scapers's mainstay palm for exotic and carefree tropical beauty,but is even better outside. It likes sandy soil, but is adaptable to clay and loam both slightly alkaline and acidic. Good drainage is also important. It is a medium fast grower, but it can grow fast given the right conditions of warmth and humidity, together with a rich soil and an abundance of water. Caryota mitis vary in shape. Specimens raised in dry and/or infertile soils tend to be smaller in stature with smaller leaves. Light also affects the plant's form while those grown in full sun are more compact. Because it is shallow rooted, it should be planted in an area protected from wind. This palm is perfect for understory planting in woodland areas.
Fertilization: Need a perfect fertilizer diet including all micro nutrients and trace elements or slow release fertilizer. Micronutrient deficiencies are occasional problems. If it doesn't get enough Mn and Fe, the leaves take on a rather unhealthy yellow colour. Micronutrient deficiencies only show up on soil with a high pH.
Water Requirements: It has a moderate drought tolerance, but for healthy growth it needs regular water, however it does not want to sit in continually wet, mucky soil. The roots and lower trunk can rot if soil is kept too moist.
Light: This attractive palm can be grown full sun to part shade, and even in shade.
Hardiness: It is one of the hardiest feather palms, tolerating temperatures down to about -2°C (or even less for short periods) when mature, young plants are more cold sensitive; it is widely cultivated in subtropical and warm temperate regions. Young plants grown in containers must be kept warmer than 4º C.
Maintenance: Prune diseased, damaged or drying fronds, but do not prune if the frond still has some green colour. Palms recycle nutrients from dead or dying fronds and use them for healthier fronds. Palms only have a set number of new leaves that can sprout and grow per year and removing fronds will not increase that number. If you cut off more than what will grow annually, you could be left with a pretty bare and bald palm.
Roots: Not a problem.
Uses: Either as a single specimen or in groups, this is a strikingly beautiful species. Its fabulous clustering habit makes it perfect a perfect screening palm (and not too tall) and is also used to accent residential landscapes. Can be grown indoors with only moderate, or average indoor light conditions.A shaded patio will provide an excellent environment for young specimens which can eventually be planted in the ground as the grow bigger.
Pests and diseases: It is relatively free of diseases and insect infestations.
Propagation: Fresh seeds germinate in 3 - 4 in warm media and the seedlings are attractive. Fishtail palm can also be propagated by division of clumps and separation of suckers from the parent clump.
Warning: Flesh of seed and trunk is caustic to touch and should be handled with care. It contains sharply pointed calcium oxalate crystals which are toxic when ingested, and contact with eyes and skin may result in severe burns. The fibrous hairs at the base of the leaf stalks produce a skin irritation.