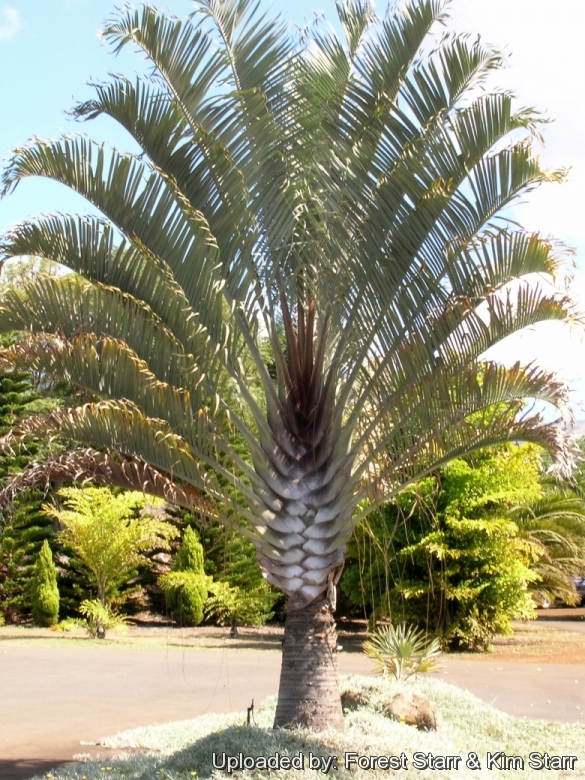 Origin and Habitat: Endemic to Madagascar. The single population is estimated to number about 1,000 mature trees and the species is restricted to a small area in the southwest of Andohahela (Ranopiso). This palm is widely cultivated in tropical areas for its spectacular shape (Reported from Florida, southern Texas, Hawaiian Islands).
Altitude range: Recorded from 100 to 800 metres above sea level.
Habitat: Forest transition areas between moist rainforest and dry soils on steep midslopes or along seasonal riverbanks on the western slopes of Andohahela, at the southeast of Madagascar. The main threats are the collection of seed for the international horticultural trade and leaves are harvested for use in thatching.

Description: Dypsis decaryi is a beautiful solitary palm, up to 10(-15) m tall. It can be easily distinguished by its triangular trunk and 3-ranked leaves and is often confused with Dypsis madagascariensis that also has 3-ranked leaves, but the leaflets are inserted in multiple planes, with a plumose appearance.
Trunk: Single, stocky, generally smooth with obvious leaf scars, dark greyish-brown, up to 7 (or more) m tall and up to 40 cm in diameter.
Crown shaft: Not closed, but triangular shaped at the top of the trunk that is formed by three distinct points where fronds emerge (sort of like a pagoda) which gives the palm its common name; crown spread of 4-6 m.
Leaves (fronds): About 2.5-3 metres in length, pinnately compound, reduplicate, arching almost upright from the trunk and then arching gracefully about a metre from their tip. The petioles are only 30 cm long and stack on top of one another and forms a cupped, triangular shape. Leaflets are bluish-green or greyish-green with brown or tan twisted ramenta on the underside near the rachis, about 2 feet long, have entire or smooth margins, and form a "V" shape as they sit opposite to one another on the rachis. The young leaf bases are covered with felt-like, reddish-brown tomentum.
Inflorescence: 120-150 cm long branching to three orders, from the axil of lower leaves.
Flowers: Yellow and green. Male and female flowers are borne on the same inflorescence.
Blooming season: It blooms all year round.
Fruit: Round to egg shaped, egg shaped, and green when immature and yellowish-white when ripe about 25 mm in diameter with remnants of the stigma at the base. The fruits are known for their high nutritional value. 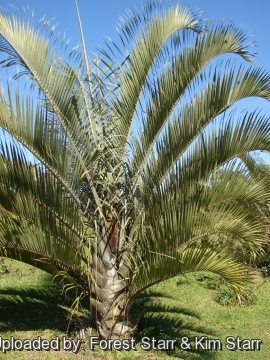 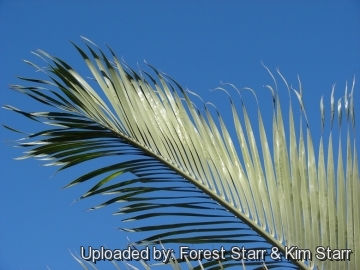 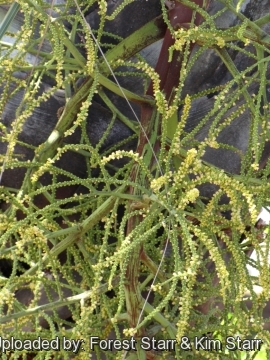 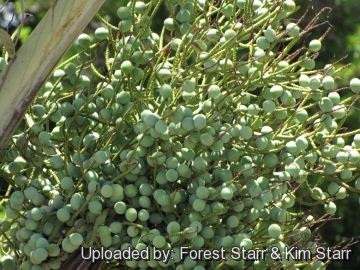 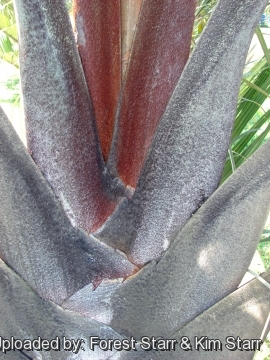 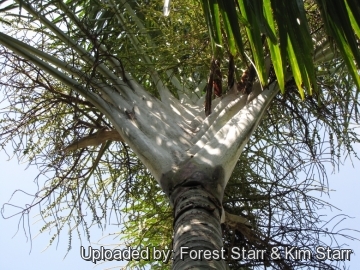 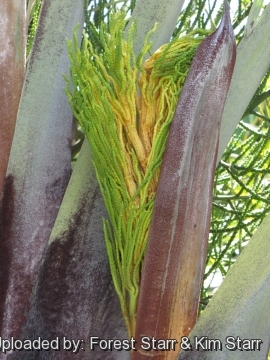 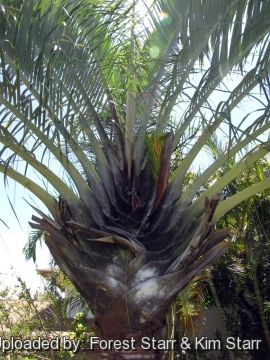 Cultivation and Propagation: This palm is an excellent relatively slow-growing garden plant adapt to different climates, from tropical to warm temperate, it prefers well-drained sandy soil except those that are constantly soggy. If home-grown, give some sun as with most tropical palms, and water well and feed once monthly. It can tolerate sweltering heat and windy conditions
Light: Prefers full sun but will take some shade.
Drought tolerance: Moderate. This palm a will tolerate occasional dryness if not prolonged and can even thrives in poor, dry soils, but do better when grown in nutrient-rich soils with regular watering.
Fertilization: Need a perfect fertilizer diet including all micro nutrients and trace elements.
Aerosol salt tolerance: It is moderately salt tolerant, but does a lot better inland then it does on the coast.
Hardiness: Some cold tolerance. This palm has tolerated temperatures down to –1ºC and even a little snow (USDA Zone 9b-11). However it can be difficult to get it to look its best without a great amount of heat and sun.
Aerosol salt tolerance: It is moderately salt tolerant.
Maintenance: Remove dried fronds.
Propagation: Fresh seeds germinate quickly within a month of being planted and the seedlings are attractive.
Remarks: The plant does not transplant well, having very sensitive roots that tend to die off if manipulated.
Use: Its very neat appearance and stature makes it perfect near highways and used to accent residential landscapes and close to swimming pools. It is sometimes closely planted in groups of two or three. The leaves of the plant are used in Madagascar for thatching.
Disease & Pests: It is quite resistant to pests but may require regular fertilization to prevent yellowing caused by potassium deficiencies.