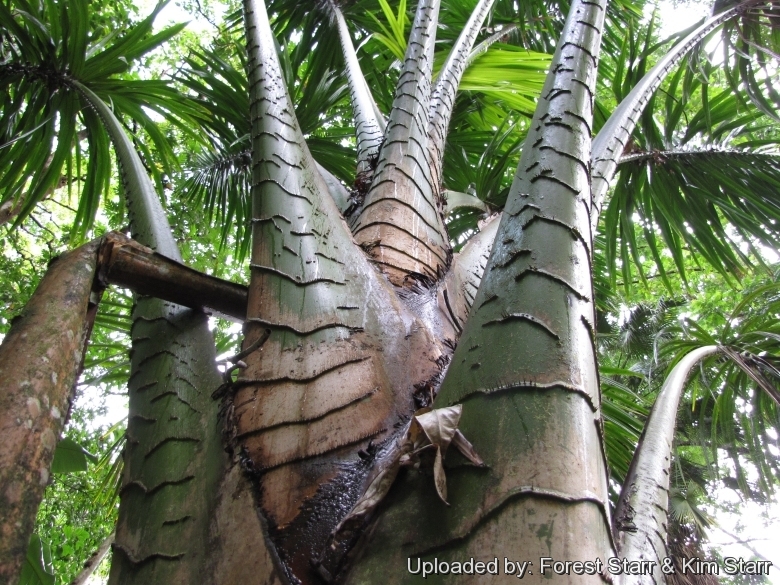 Origin and Habitat: Caroline Islands (Federated States of Micronesia, states of Pohnpei and Chuuk), Marshall Islands, and formerly in Guam and Palau.
Habitat: It grows on a wide variety of soils in humid tropical and equatorial coastal or upland rainforests, freshwater wetlands and swamps. It is sometimes present as an emergent species but is more commonly seen in patches associated with marsh areas and in open canopies under up to 50% shade. It can also grow in soil that is periodically inundated by salt water as long as fresh water flow is more prevalent. Mean annual rainfall 2000–5000 mm. Relative humidity usually more than 70%. Minimum temperature tolerated 17°C.
Altitude: From sea-level to 700 metres. All Metroxylon palms growing away from lowland regions are often the result of human cultivation.
Ecology: Seeds are disseminated by gravity or water and are often carried by ocean waves
and currents from one island to another.

Description: Metroxylon amicarum is a huge and impressive palm with long and arching fronds. All Metroxylon palms except M. amicarum will die after they produce flowers & fruit.
Trunk: solitary, 12–33 m tall (or possibly taller), 30–36 cm in diameter with widely spaced leaf-scar rings and old leaf bases attached to the top.
Crown: With erect fronds.
Leaves: Large, pinnate, arching 4–7 m long, petiole 1–3 m long. Leaflets up to 1 m (or more) long, lanceolate, dark green, with a single large, hard, sometimes yellow midrib and occur in a V on the rachis at varying angles and drooping at the ends, creating an elegant feathery frond. Petioles 0,5-5 m long, adorned with transverse spiny combs in wavy patterns along the leaf bases.
Inflorescence: Narrow, axillary, paniculate, erect until the fruit matures and then sags to a pendent cluster. It is monoecious with both male and and hermaphrodite, functional female flowers on the same plant, in pair and mainly terminal.
Blooming period: Metroxylon amicarum is the only species in its genus which is not hapaxanthic (monocarpic), conversely it flowers for a number of years (pleonanthic) instead of flowering once and dying.
Fruit: Globular to pyriform, single-seeded, 6–11 cm in diameter, 6–13 cm long, extremely hard, covered in 26–40 rows of glossy golden to chocolate brown, reflexed scales, approximately 7–14 mm long. 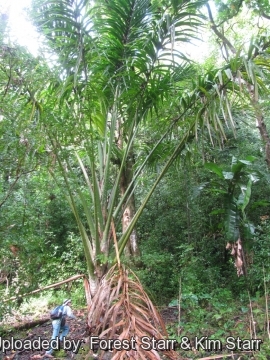 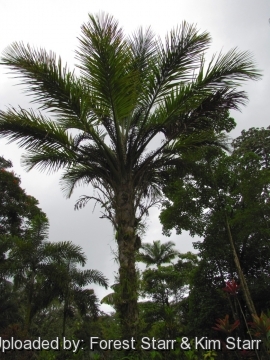 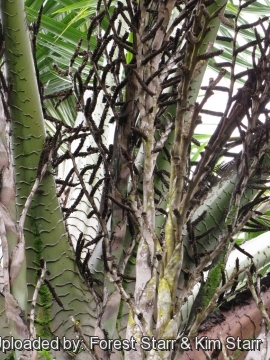 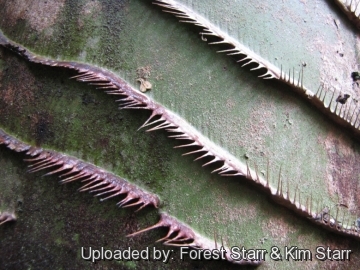 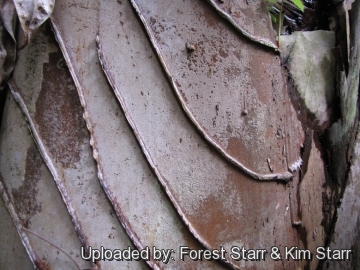 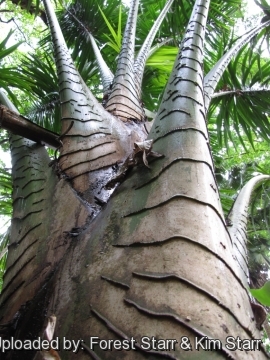 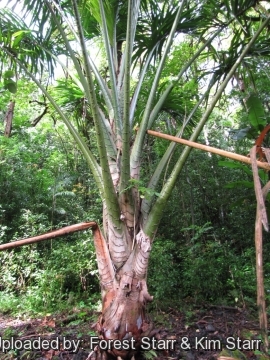 Cultivation and Propagation: It is an easy to grow palm that likes medium and heavy soils soil, but is adaptable to sand, lava and loam both acidic or neutral (from 4,0 – 7,5 ). Metroxylon palm vary in shape. Specimens raised in infertile soils tend to be smaller in stature with smaller leaves. Light also affects the plant's form and those grown in full sun are more compact.
Fertilization: Need a perfect fertilizer diet including all micro nutrients and trace elements or slow release fertilizer. Micronutrient deficiencies are occasional problems. Micronutrient deficiencies is show up on soil with a high pH.
Watering: It enjoys rainy climates and proved to tolerate a wide variety of conditions. In areas where rains are abundant and regular, it seems to put on rapid growth with this ample water. Metroxylon species tolerate waterlogged or flooded soil conditions, however, trees may decline and often do not complete their life cycle and don't reach maturation in permanently flooded localities. The plant does not tolerate drought (unless there is ample groundwater).
Light: Prefers full sun but young specimen will tolerate half day sun. .
Hardiness: Metroxylon amicarum is recommended for tropical and equatorial climates with temperature constantly over 17° C, and, even if it is probably the most cold-hardy species in the genus, it will be injured and may be killed by freezing temperatures and may show chilling injury symptoms of leaflet necrosis at temperatures as high as 5 degrees C. (USDA hardiness zones: 11-12).
Aerosol salt tolerance: Salt spray as well as mild soil salinity are tolerated.
Wind tolerance. It is tolerant of wind including bad storms and are rarely observed with sheared tops.
Maintenance: Prune diseased, damaged or drying fronds, but do not prune if the frond still has some green colour. Palms recycle nutrients from dead or dying fronds and use them for healthier fronds. Palms only have a set number of new leaves that can sprout and grow per year and removing fronds will not increase that number. If you cut off more than what will grow annually, you could be left with a pretty bare and bald Palm.
Propagation: Exclusively from seed. The nuts are placed on their sides and buried with sand or mulch to about one-half the thickness of the nut. Germination is best under high temperatures (32-38 degrees C).
Garden uses: Either as a single specimen or in groups, this is a strikingly beautiful species. Its very neat appearance and imposing stature makes it perfect for parks and to accent residential landscapes. Culture in containers is possible although growth rates are slower.
Traditional uses: This palm is one of the more common sources of Ivory Nut, hard palm seeds (a.k.a. vegetable ivory) used for carving. It is also used for roof thatching
Food uses: Metroxylon provide “sago” for most sago-eating societies. Sago is a starchy substance obtained from the pith of several palms. The palm store starch in the spongy centre, or pith of the trunk before flowering, the pithy matter is taken out and powdered ; the powder is kneaded in water over a cloth or sieve. It passes into a bowl, where it settles. After a few washings, the flour is ready to be used in cooking.