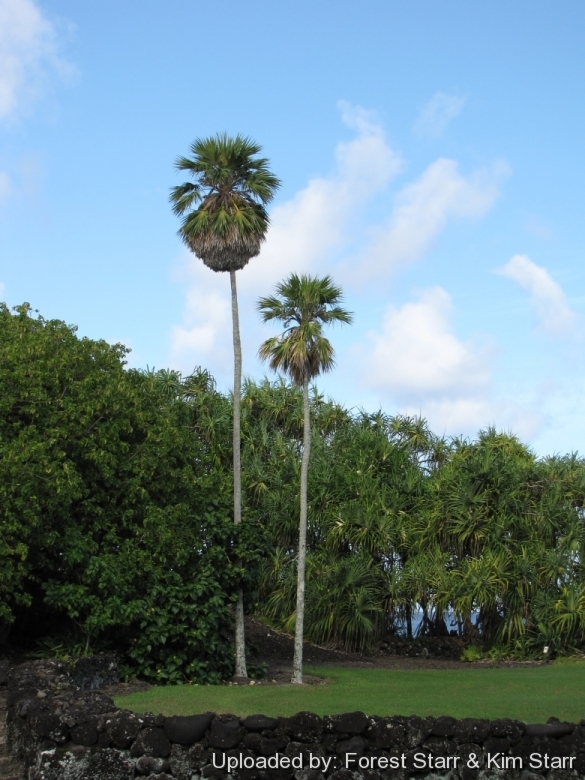 Origin and Habitat: Hawaii islands (Confined to an area stretching from South Kona, Kaʻū and Puna), USA
Altitude: Between sea level and 610 metres.
Habitat: Coastal lowland and inland in gulches in open dry to moist forests. At sea level, they are found in groups around brackish water ponds near mangrove formations. The original natural habitat of this species is unknown as it was cultivated by Hawaiians who spread the plants prior to western contact, and it is still planted today. But some evidences suggests that it was endemic to Kona, which means that it originated here and until its seeds or plants were transported elsewhere. It was for a long time considered extinct in the wild and only a few plants existed in botanic gardens or in cultivation, but recently about 60 natural trees within 8 populations has been rediscovered in the wild scattered in the Kohala Mountains and along the western and south eastern coasts of the Island of Hawai‘i. These specimens are now probably more than 100 years old. It is threatened by rats and pigs, which damage the trees.

Description: Pritchardia maideniana is a fine looking, medium sized solitary fan palm. It is a long-lived species that distinguish among its fan palm relatives by its soft feathery tips. The only other Pritchardia with similar leaves is Pritchardia schattaueri. It is quite variable.
Trunk: Single, very erect, 10-15(-25?) m tall.
Leaves: Costapalmate (wedge-shaped), forming one third to half of a circle, only slightly divided relatively narrow compared to the most popular species like Pritchardia pacifica, glabrous above,covered underneath with a few scattered scales. Segments (leaflets), pleated, single-fold, with soft feathery tips, that don't droop much, if at all. Petioles with pale or pinkish coloured soft wool extending from under the petiole along the segment folds. The leaf sheath breaks down into a mass of tawny fibres.
Flower: Three-petaled, creamy white, arranged in branched hairless panicles located among the leaves.
Fruit: About 24 mm diameter, greenish (immature) to brownish or purplish-black when ripe. The immature fruit smell and taste like coconut and is edible.
Seeds: 16 mm in diameter.
Note: The flowers and fruit are similar to Pritchardia hillebrandii, but the seeds are larger. 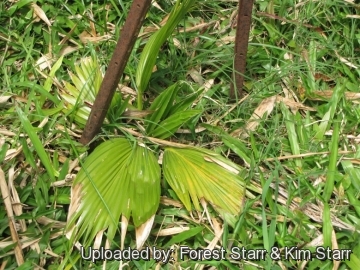 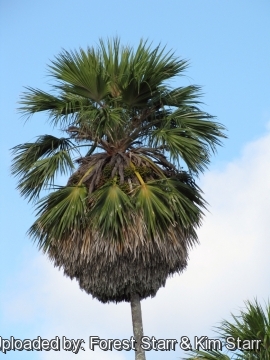 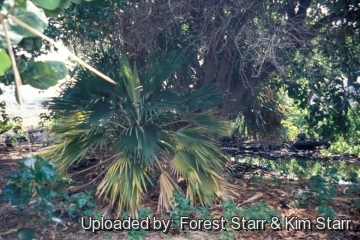 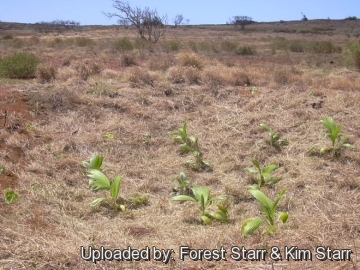 Cultivation and Propagation: Many Pritchardias are fussy and difficult to grow outside the tropics, frequently suffering from a yellowing of the leaves, but Pritchardia maideniana is a pretty robust grower, very modest in its requirement. It relatively slow growing and vary in shape. Specimens raised in dry and/or infertile soils tend to be smaller in stature with smaller leaves. Light also affects the plant's form while those grown in full sun are more compact.
Soil:It grows well in sand, cinder or organic and well-drained soil, but is adaptable to clay and loam both slightly alkaline and acidic.
Fertilization: Need a perfect fertilizer diet including all micro nutrients and trace elements or slow release fertilizer. Micronutrient deficiencies are occasional problems. Fertilize often for faster growth. Potted or younger loulu planted in the ground appreciate a foliar feeding monthly or bi-monthly.
Water Requirements: It tolerates low levels of humidity, though it prefers evenly moist but not consistently wet medium. When supplied with adequate moisture and fertilizer it is also fairly fast growing. This palm is very drought tolerant once established. Water young plants for healthy look and fastest growth.
Light: Prefers full sun but will tolerate half day sun.
Hardiness: It is adapted to tropical and subtropical climates but tolerate a wide range of climates and will even tolerate cool conditions; they should be grown in cold green houses or at least in a place where they are sheltered by the wind; However mature specimens can endure temperatures down to about -0°C ( or less for short periods), while young plants are more cold sensitive. Best kept above 10° C.
Maintenance: The dead leaves, flowers and fruits can be removed in a landscape setting for a cleaner appearance. Do not prune the fronds that still have some green colour. Palms recycle nutrients from dead or dying fronds and use them for healthier fronds. Palms only have a set number of new leaves that can sprout and grow per year and removing fronds will not increase that number. If you cut off more than what will grow annually, you could be left with a pretty bare and bald palm. Left in place they form an attractive ‘skirt’ around the trunk.
Wind and salt tolerance: It does very well in low elevation landscapes tolerates seaside conditions and salt spray. With a particularly windy climate it is suggested to secure young palm to long solid stakes, to avoid that the wind could bare young and not very developed roots; specimens which are only a few years old might fear intense wind, but as it becomes a tall palm it can look ratty after the winds.
Pest & diseases: It is prone to leaf rollers, red spider mites and sugar cane borers. Rats will eat the fruit.
Early Hawaiian Use The hard wood of the trunk were fashioned into spears. The trunks loulu were notched for climbing to gather the immature fruits and fronds. Older specimens still bear notches that can be seen today. The fronds were used for thatching and as plaiting such as papale (hats) and fans.
Food use: The young fruits called hāwane or wāhane are small with a single seed, edible and tasty; the soft interior can be eaten raw after being peeled or used to add a coconut flavour to other dishes. The flavour of fruit with the is similar to coconut.
Ornamental: It is cultivated as an ornamental tree, and planted in gardens and parks in tropical and sub-tropical climates either as a single specimen in small groves of three or more palms. Culture in containers is possible although growth rates are slower. A bright patio will provide an excellent environment for young specimens which can eventually be planted in a sunny location.
Propagation: Sow mature fresh seeds buried half way in pot of clean, well drained potting soil, with bottom heat and water daily. The seeds may take 2 or 5 months to germinate, and they may spend up to two years as small seedlings before beginning to grow into mature plants, plants of 30 cm can be put in ground/larger pot; The seeds are not known to store well, but can eventually stored in the refrigerator, but should be planted soon after collection. You can also store the seeds in a plastic baggie with damp peat moss and they will eventually sprout. Patience is required in Pritchardia propagation. these palms easily hybridize with other Pritchardias, claiming a specific species requires seed collection from wild populations.